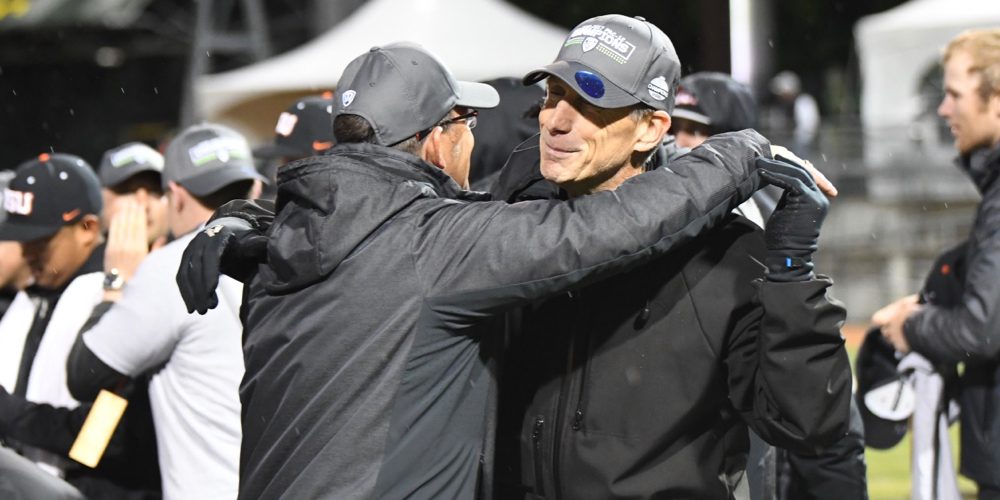 A Celebration Of Beaver Baseball

EUGENE, Ore. — Something Pat Casey said back in 2006 has always stuck with me. Casey had just led Oregon State to its first national championship and racked up a bunch of national Coach of the Year awards, but he did not let the success alter his perception of what coaching is all about.

It was such a simple statement, but to me it seemed like both a powerful mission statement and a blueprint for success for young coaches who aspired to greatness at their chosen profession. I was reminded of that quote on Friday night, when I heard echoes of it from Casey’s pitching coach, Nate Yeskie, minutes after Casey recorded his 1,000th career victory as a head coach while his Beavers clinched the Pac-12 title outright with a 5-4 win at Oregon.

“I don’t think he ever looks at the numbers. I think he looks at what he feels each team can become. And he feels like if they can meet or exceed those expectations then he’s done his job,” Yeskie said. “He doesn’t measure himself as many people would think that the industry calls for. He challenges himself, he challenges us, he challenges the players. So whatever standard he tries to hold the players and the staff to, he holds for himself. And I think that he’s a tough nut to crack. What you see on the outside is definitely — the fire burns hot inside. And there’s a passion for people, there’s a passion for building men, there’s a passion for establishing character, because he knows that baseball’s not going to be the thing that carries everybody. He says, ‘Gosh, you know, take (Jacoby) Ellsbury, (Darwin) Barney, some of these guys out of the mix, there’s been lots of players that have not continued, and that’s just the nature of the industry.’ So he really wants guys to come together. Because he says, and we remind ourselves of this all the time, he says in 30 years nobody’s going to remember what your batting average or your ERA was, but they are going to remember what kind of teammate you were.”

That “passion for building men” has helped make Casey one of the greatest coaches of his generation. He has created a very special culture at Oregon State, a culture of winning but also a culture that values brotherhood above all else. And in the process, Casey has turned Oregon State from an afterthought tucked away in the Pacific Northwest into a college baseball superpower.

That transformation remains one of the most improbable and amazing stories in college baseball history. With a season that begins in February, cold-weather baseball programs are still at such a huge disadvantage compared with their warm-weather peers — both on the recruiting trail and once the season begins. When Casey took over as Oregon State’s head coach in 1994, the Beavers hadn’t been to a regional since 1985, and they hadn’t been to Omaha since 1952. And it took him until 2005 to end both of those droughts, but he persevered through the tough times and he never let his players see doubt in his eyes. If you don’t believe, they won’t either.

But he admitted Friday that when he first came to Corvallis, he never envisioned his OSU program would become a national power (which just clinched its 11th NCAA tournament trip since 2005 and is seeking its fifth trip to Omaha and third national title in that span). He certainly never thought about reaching the 1,000-win plateau.

“No, never,” Casey said. “I’ll tell you what, I love winning, no doubt about it. But really these guys are the ones that did it, I get the good fortune of getting to coach them … I think all those championships are special, all those players are special, all those coaches that helped me get here. The staff I have now is unbelievable. So it is really special tonight. I’m looking forward to someday sitting back and being able to enjoy some of the wins, but it seems like if you win a game or you lose a game, all you’re doing is trying to figure out how to win the next one. So I just feel blessed.”

That’s a fairly typical Casey answer to a question about himself, but it’s also an honest answer. He’s focused on his team, and you get the sense he’s probably just happy to get all the hoopla over the 1,000-win milestone behind him.

But still, Friday was a special day for Beaver Baseball, and it was a special day for Casey, the man who embodies Beaver Baseball. You could see it in the way he jumped up and down with his arms raised after reliever Mitchell Verberg stranded the bases loaded in the ninth with a big strikeout to clinch the series, the conference title and that 1,000th victory. You could see it in the big smile on his face as he hugged his assistants. You could see it writ large on his face after Max Engelbrekt and Luke Heimlich dumped a Gatorade cooler on his back as he conducted a postgame TV interview. 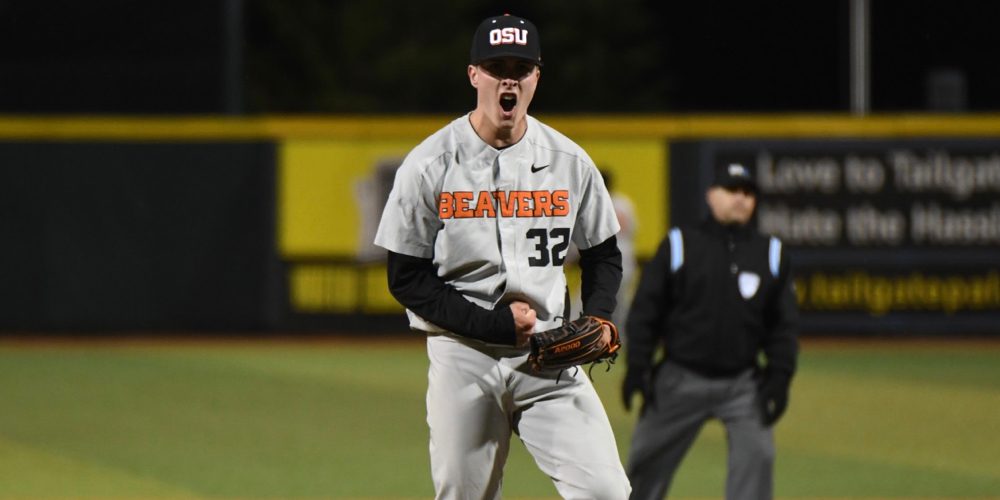 “That was amazing. Just seeing him get all excited when he’s usually so doom and gloom during the game, it was the greatest sight ever,” OSU center fielder Steven Kwan said.

Kwan said the most important lesson he’s learned from Casey is the value of confidence: “You can’t ever doubt yourself. Will can get you a really long way. So just believe in yourself, trust in your teammates — that’ll get you really far.”

If you don’t believe, they won’t either.

Star second baseman Nick Madrigal said the most important things he’s learned from Casey were about character. Sure, Casey has helped Madrigal develop into one of college baseball’s best players, a surefire premium draft pick in 2018. But ultimately, baseball is secondary.

“Being here for myself, that’s probably one of the best decisions I’ve ever made in my life. I look up to that guy, and some of the stuff he says, I’ll carry it with me for the rest of my life,” Madrigal said. “Just being a good man on the field and off the field. Baseball’s just a game, but off the field you can be a good person too and help people out, and be a good leader off the field as well.” 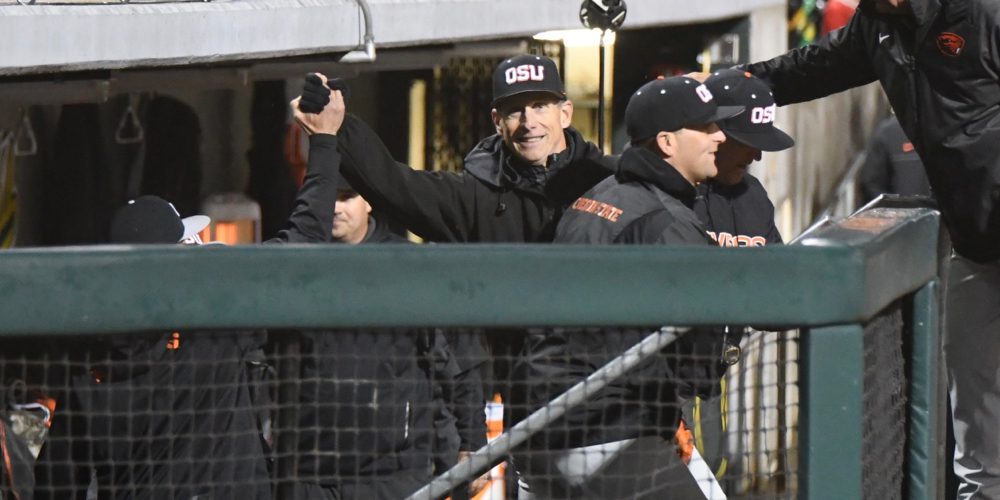 Drew Rasmussen, the redshirt sophomore righthander who has worked his way back from Tommy John surgery, was particularly emotional after Friday’s victory. He credited the “brotherly love” that the Beavers have for each other for helping to lift him up during his 13-month recovery, which took another big step forward Friday when he made his first start of the season and showed premium stuff during three innings of one-hit ball. That brotherly love is no accident. Creating that kind of bond is the real end game for Pat Casey.

“I remember on my visit, Case said, ‘We’re gonna be your family away from home.’ Ever since day one, the rest of the coaching staff and the team, they’ve stuck to that word,” Rasmussen said. “He’s an awesome guy, he’s done an incredible job building an incredible program here in the Northwest. He means a whole lot to me because he is a great guy on and off the field.”

Given the confluence of events — Casey’s 1,000th win, clinching the Pac-12 championship, Rasmussen’s strong progress, the drama of the final out with the bases loaded and a full count, and all of it happening on rival Oregon’s field — Friday couldn’t have been a more perfect celebration of Beaver baseball.

“You couldn’t have drawn it up any better than that,” Rasmussen said. “A thousand is a lot, and obviously he’s been doing a great job for a long time and there’s no one more deserving than him. So to get a championship and his thousandth win on the same day is awesome.”

“It’s pretty special,” added Madrigal. “I mean, he’s a legend, he’s one of the best coaches in the country. I think it’s a pretty special day all the way around.”