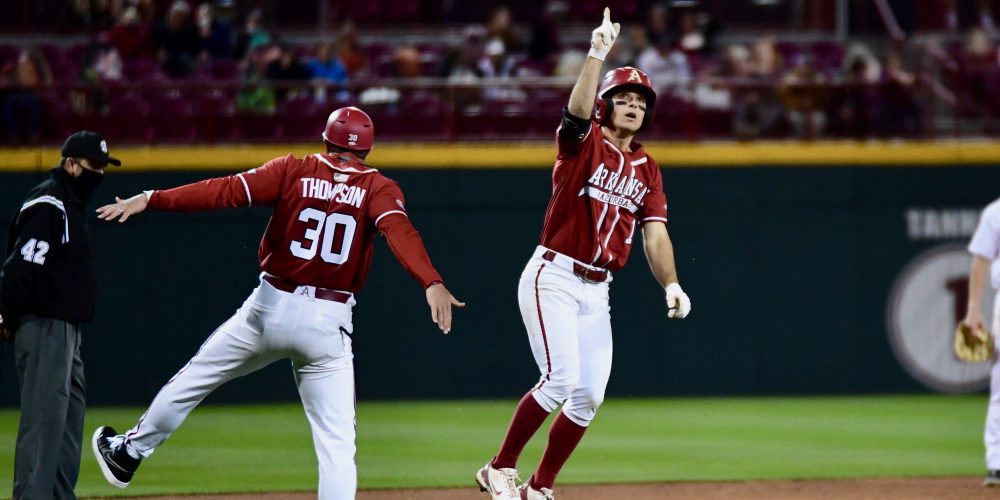 COLUMBIA, S.C. — You don’t tug on Superman’s cape. You don’t spit into the wind. You don’t pull the mask off that old Lone Ranger. And you don’t mess around with Robert Moore.

You might need to go back to Dustin Pedroia’s days at Arizona State to find another college baseball player who packed as much swagger into a 5-foot-9 frame as Moore, the second-year freshman second baseman for Arkansas. The man simply oozes easy confidence, whether he’s digging into the batter’s box, performing defensive wizardry in the middle infield or talking with reporters in a postgame zoom.

So when the rowdy section of South Carolina fans behind the Arkansas dugout started chanting “oompa loompa (clap, clap, clap-clap-clap)” after Moore fell behind in the count 0-2 in the sixth inning Thursday at Founders Park, I couldn’t help but blurt out, “Uh-oh. That’s a bad idea.”

On the very next pitch, Moore belted a Thomas Farr fastball deep into the Columbia night for a no-doubter two-run homer to right-center, breaking a 1-1 tie and propelling the top-ranked Razorbacks to a 6-1 victory in the series opener. It was Moore’s second homer of the night, and he understandably got his money’s worth with a major league bat flip and a boisterous celebration as he rounded third and greeted teammates at home plate.

“I would say I was more fired up tonight just because my grandparents live here and my grandfather’s actually in the hospital right now,” Moore said when asked if the chants from the Gamecock faithful fueled his fire a little more. “I knew he was watching the game and I really wanted to play well and make him smile or something. So I had to have a little bit of an edge tonight.”

Moore’s grandfather surely cracked a smile after that moment, and there was no shortage of smiles in the Arkansas dugout, either. Even as a young player, Moore seems like an emotional leader for this stellar Arkansas club, the proverbial straw that stirs the drink. And he stirred it up with gusto on Thursday night.

“We just got out of the inning before that, it looked like they were gonna put together a big inning for us,” Hogs coach Dave Van Horn said. “[Christian] Franklin had a great at-bat, hit a line drive the other way. Then Robert came up and he was down 0-2 real quick. It looked like they tried to get him to chase an elevated fastball and he threw it too low, and he crushed it. He hit it harder than the first one — by a lot. It got our team really fired up.”

Moore is a throwback baseball player, an uncommonly savvy student of the game with an innate feel for the rhythms of baseball. That shouldn’t be a surprise to anyone who knows his background, as the son of Royals general manager Dayton Moore and a decorated high school player with a USA Baseball pedigree. Just listen to the way he broke down his two home runs Thursday against Farr, a flame-throwing righthander who will be a high pick in the draft this summer.

“The first at-bat, I saw that he was throwing a lot of first-pitch fastballs to our lefthanders, and that’s what he was doing throughout the course of the year, especially in SEC play,” Moore said. “I was hitting sixth tonight so I got to see [Zack] Gregory and [Matt] Goodheart and [Brady] Slavens hit, and that’s what they were doing to them. I just tried to get a pitch, a fastball and try to take it L-screen, or right back up the middle, and he missed middle-in and my hands just reacted.

“The second one, I was down 0-2. Coach [Nate] Thompson comes up with a great two-strike approach for us: take fastball the other way, breaking balls and offspeed pitches through the middle. He went with the fastball and I was trying to go the other way, but my hands just reacted to it.”

You don’t often get that kind of insight from a college player in a postgame interview, but that’s part of what makes Robert Moore special. He seems mature beyond his years, so sometimes it’s easy to forget that this is a young man making his first voyage through the rigors of an SEC campaign, because the season was canceled before he could play an SEC game last year.

So it was jarring when Moore started his SEC career 0-for-17 over his first four and a half games, including a series against Alabama and the start of a set at Mississippi State.

And then, in the blink of an eye, he started hitting balls on the nose, starting with a pair of hard line-drive singles in the second game in Starkville after striking out in his first three at-bats. He added a huge RBI triple off the right-field wall a day later, and then he was off to the races.

“He really struggled right at the beginning of conference play,” Van Horn said. “Against Alabama we opened at home and they whipped us on that Friday night, but Robert, I don’t know if he got a hit the whole weekend, he might have been 0-for-10 or 0-for-12. He finally got a hit at Mississippi State, I think it relaxed him a little bit. I took him out of the leadoff spot, put him way down in the order for a series. And then when I put him back up at the top, I told him I wanted him to take some pitches, so I started asking him to take maybe the first at-bat, maybe the second at-bat, and he saw some pitches, got into the count a little bit, and I think he just relaxed. His development, it’s week to week. I just see him getting better and better, and he’s confident. He’s always been confident, but he’s never really failed before, probably throughout summer ball and travel ball and all that, he gets here and we played 16 games last year and he really didn’t fail. And he finally failed. And it got to him a little bit, but he got out of it. And now he’s swinging the bat extremely well. He’s confident.”

Moore said the biggest difference for him over the last month has been an improved approach.

“The first week or so I might have tried to do a little bit too much. I think it started out I was hitting balls right at people, and then I saw the batting average and I wanted to hit myself out of it, and started rolling over, and the next thing you know strikeouts come,” Moore said. “Just got out of my approach a little bit.”

That’s Robert Moore in a nutshell. He’s wired to play baseball seven days a week, and you better believe he’s going to bring it every single time he gets the opportunity to step across the lines. 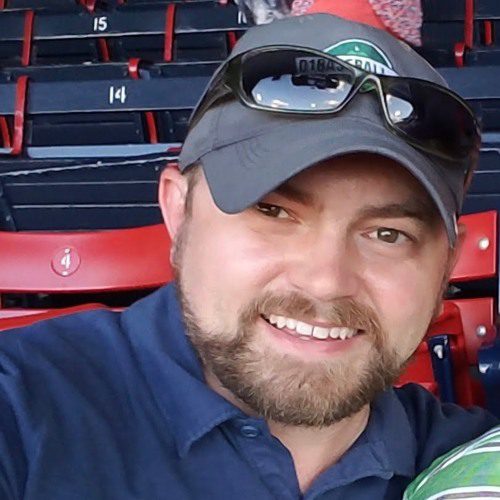 〈
Previous Article Weekend Spotlight: La Salle Making History While Trying To Save Program
Next Article Off The Top Of My Head: Week 10
〉