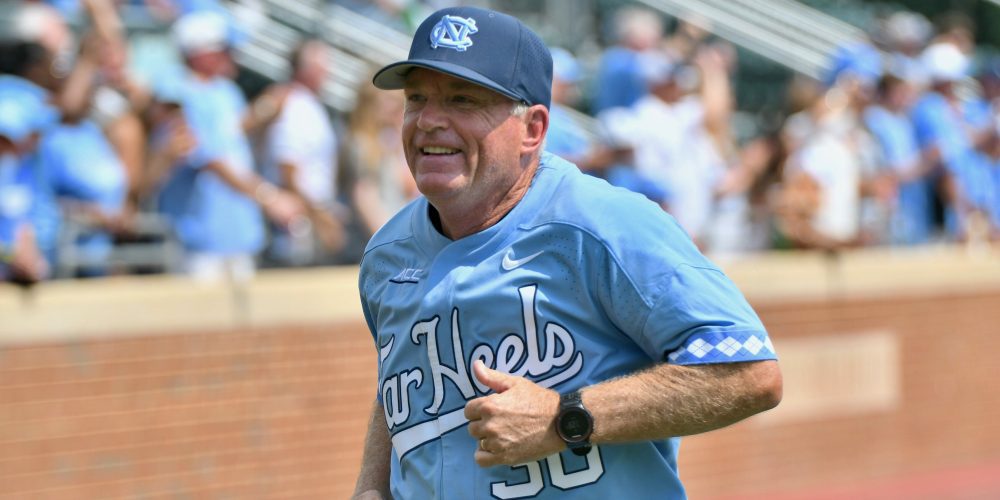 In early April, North Carolina coach Mike Fox considered the dramatically transformed college baseball landscape and decided he just had to speak out. Uncharacteristically for a coach who has always played his cards close to the vest, Fox called me up and made a passionate plea in favor of roster relief in the wake of the COVID-19 pandemic. In particular, he argued against the roster cap he has long despised. He argued in favor of increasing opportunities for college baseball players.

“If there was a 35-man roster limit in 1977, you wouldn’t be talking to me,” Fox said. “I’ve said for years, to cap the kids that can be involved with your program is just wrong, and it’s sad. Part of that is me just being a walk-on, and no you don’t need 36, 37, 38 players to win a baseball game. But if the NCAA is going to say they’re all about providing opportunities, then that 37th, 38th guy that just wants to be part of the program and is on no scholarship and is fine with that, you shouldn’t have to turn a kid away who wants to be involved in your program and the coach wants him to be involved. Give him a purpose on a college campus.”

That sentiment said a whole lot about Mike Fox, a hard-nosed true walk-on who went to the College World Series as a player at North Carolina in 1978, then went on to become a hard-nosed coach who pulled himself up through the Division III ranks at North Carolina Wesleyan, where he won a national championship in 1989. After 15 superb years at Wesleyan, Fox took over the reins at his alma mater in 1998, and over 22 years he elevated a program long regarded as a “sleeping giant” into an actual giant. UNC had made just four trips to Omaha in its history when Fox took over, but starting in 2006 he led the Tar Heels to Omaha six times in eight years, then added a seventh trip in 2018. On Friday, North Carolina announced his retirement and promoted his hand-picked successor, long-time lieutenant Scott Forbes, to take over the head job.

Fox never lost the spirit of that walk-on who took nothing for granted, and his best teams mirrored his own mentality. Many of Fox’s favorite players over the years were those scrappy little middle infielders  who had to battle for every shred of playing time — “tough little nuts” in Carolina parlance. In other words, players like Fox himself. Sitting with Fox in the dugout after a Fall World Series game in October, I smiled when he described juco transfer second baseman Mikey Madej this way:

“He’s a good player, switch-hitter, veteran, loves to play. I could hit him ground balls all day — as a former second baseman, he’s just fun to watch. Everything he does is just full speed. You see him run over there after that foul ball? You see him back up first on throws. You have to tell him one time — ‘Hey Mikey, see that brick wall over there? Anytime a third baseman comes in to make a one-handed play, if he doesn’t throw the ball to first base it’s coming off that wall right to you, and you’ve got a chance to throw a guy out at second or at home. Just FYI, you’re new here.’ You tell that kid one time, you don’t have to tell him again. He’s fun, high energy.”

In recent years, Fox himself has mellowed out just a bit, at least from my perspective as someone who has covered him since my days as a student reporter at UNC in 2002. He’s still that same natural-born teacher who doesn’t hesitate to interrupt fall scrimmages to emphasize a point of instruction. He’s still got plenty of intensity, and his drive to win has never waned. But he’s opened up a bit more with media, and taken more time for casual postgame conversations, and been less guarded. He has seemed like a man at peace with his legacy — much like his predecessor as college baseball’s active wins leader, Florida State’s Mike Martin.

Neither Martin nor Fox ever managed to win that last game in Omaha, though both of them came oh-so-close. But neither of them seem haunted by the ghosts of College World Series past, nor should they be. They spent decades making positive impacts on young men, and that alone is a legacy that would make anyone proud. But beyond that, Fox and Martin turned their alma maters into college baseball superpowers, and amassed successful winning seasons at an alarming rate. Fox finished his career ranked 15th on the NCAA’s all-time wins list and seventh in winning percentage (.731).

After UNC’s sixth Omaha trip under Fox in 2013, the Tar Heels hit a lull, largely as a result of a recruiting class that got ravaged by the draft, with six recruits signing in the first 66 picks. UNC missed regionals in 2015 and ’16, then got shocked in a home regional as the No. 2 national seed by Cinderella Davidson in 2017. Those disappointments made Fox appreciate the 2018 trip to Omaha even more. I’ve never seen him as euphoric as he was after his Tar Heels beat Stetson to win the Chapel Hill Super Regional that June.

And when that magical 2018 ride came to an end with a loss to Oregon State, Fox saluted a team that embodied all the qualities that made Fox himself one of college baseball’s greats.

“The end of the season, it stinks,” Fox said in what would prove to be his final press conference in Omaha. “And it’s especially hard when you have really such a great group of kids. Probably not one of our most talented teams that we’ve had at UNC, but perhaps our most unselfish, toughest, grittiest just determined to get here. For me personally it’s probably been one of the most seasons I’ve had because this team has just been so easy to coach.

“…They made it easy because they got it. They just got it. And I just want kids that have respect for being at the University of North Carolina, I tell them that all the time. This is a special place. And you need to respect being here. And act right, do what we ask, represent our program well and graduate, get your degree and help us win a few games along the way. It sounds pretty easy, but all these kids have done that. That makes them special in my book.”

Forbes, who played for Fox at Wesleyan and has spent the last 19 years as Fox’s righthand man in Chapel Hill, knows exactly how to represent the program, and what makes it special. Like Fox, he’s a self-made grinder with Division III roots. He is the ideal person to continue and build upon Fox’s sterling legacy.