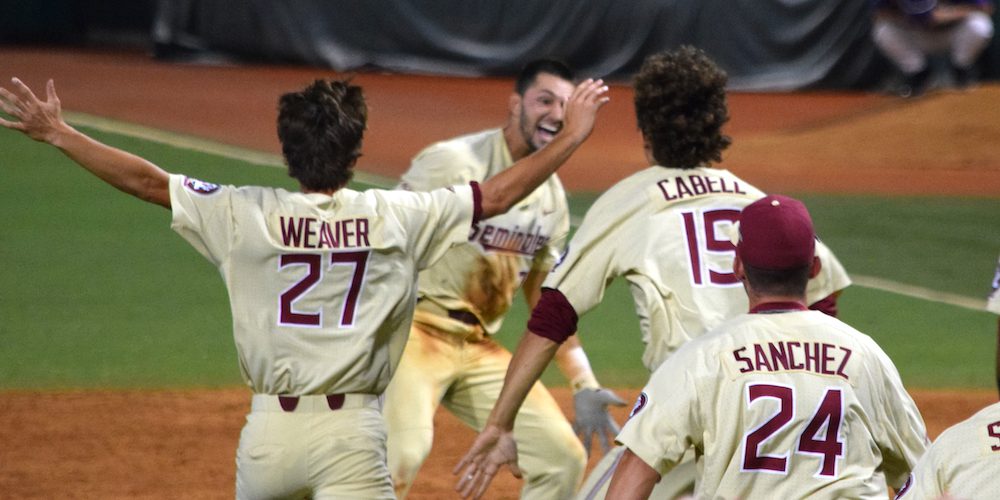 He got that chance.

Florida State and LSU traded big pitches in extra innings. LSU righthander Devin Fontenot put together a performance to remember, striking out 11 in 6.1 innings, while for the Seminoles, junior Antonio Velez etched his name into the FSU history books with a Herculean relief performance, striking out six and allowing just four hits in 4.2 innings. With neither Fontenot nor Velez flinching, everyone knew it would come down to which offense found a way to get a key hit.

That team was Florida State, as Drew Mendoza smacked a two-out single through the right side in the 12th inning to walk-off LSU 5-4 in 12 innings, and most importantly, to send ‘11’ back to the College World Series in the final campaign of a coaching tenure loaded with ridiculously impressive results and milestones.

“It’s exactly what he deserves,” Mendoza, who hit the game-winner, said. “We’re fortunate to do it for him. We got there and we’re going to enjoy this with him.

“It’s unbelievable,” Mendoza said. “I don’t think anyone in this room or nationally would’ve put us in this place right now. We’re all blessed, and it’s been an incredible ride. But we’ve always believed in each other and that started last August. That has come to fruition, and we’ve gotten on a roll since that NC State [at the ACC tournament] game”

As the Seminoles did last weekend at the Athens Regional, they once again played an impressive brand of baseball against the Tigers. FSU righthander C.J. Van Eyk, one of the premier sophomores in college baseball, looked sharp the first few innings against the Tigers, sitting 94-97 and up to 98 mph with his fastball, along with a quality changeup and power breaking ball. But as good as he was, you knew the Tigers were going to make a run at some point, and they did so in the eighth as Josh Smith led off the frame with a double and Antoine Duplantis brought him home on an RBI double. Van Eyk exited the game, but Antonio Velez proceeded to allow an RBI single by Zach Watson to tie the game at 4-4.

Little did we know the two teams would trade zeroes for several innings, overshadowing yet another high-quality start by Van Eyk, who struck out five in 7.1 innings.

“Van Eyk was really good tonight, and he’s got a really dynamic arm,” LSU coach Paul Mainieri said. “He’s got a dynamic arm and he’s got great off-speed pitches. We finally got him out of the game, and we thought it would work out well for us when we got him out of the game. Then they brought in that lefty and we couldn’t figure him out. I really thought Duplantis knocking out Van Eyk was going to be the turning point in the game.”

But it wasn’t. Velez proceeded to avoid further trouble in eighth with a groundout to end the inning. And while Fontenot proceeded to strike out 11 while throwing 96 pitches over 6.1 innings in extra innings for the Tigers, Velez answered the call in impressive fashion. The FSU lefty tossed 4.2 shutout innings and allowed a baserunner in every inning but the ninth. But he made big pitches when they were needed the most.

“He has proven no situation is too big for him. He doesn’t care if you put him in there with bases loaded and a 2-0 count,” Martin said. “He’s got a great head on his shoulders and he’s a good student. Velez will be a big, big part of this team in Omaha.”