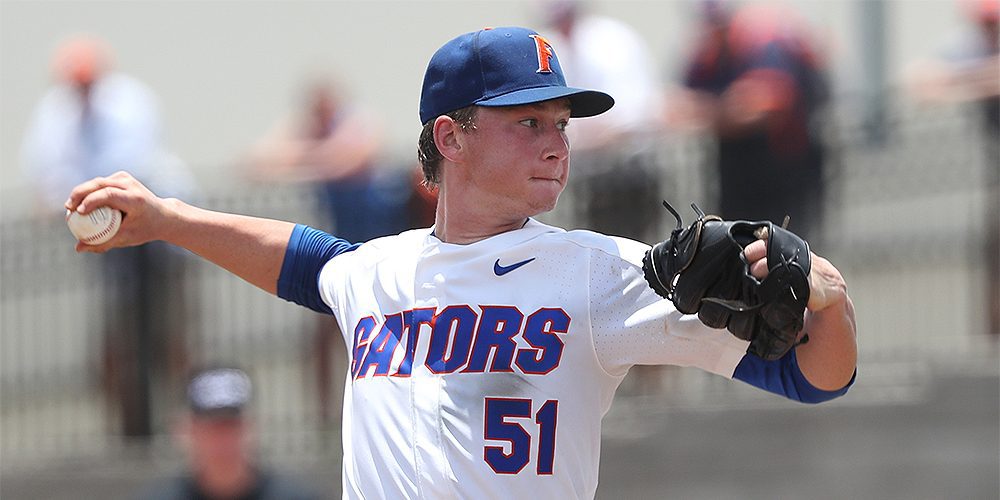 “I felt my hamstring pull a little bit,” said Singer, who missed two starts last month due to that injury. “But it felt good the rest of the way. I wasn’t coming out.”

That was unfortunate for the Auburn Tigers, who lost 8-2 as Singer beat fellow first-round righthander Casey Mize in the opening game of the best-of-three super regional at McKethan Stadium.

Things weren’t looking so great for the second-ranked Gators (46-18) after 2 1/2 innings. Singer had thrown 71 pitches, and Florida trailed 2-0 against the overpowering Mize, the No. 1 overall pick in the draft (Tigers).

Auburn coach Butch Thompson – like everyone else in the yard – took note when Singer came up a bit lame on the second batter he faced in the blistering heat of a noon start.

“I was hoping he was OK,” Thompson said when asked about Singer. “But I was (also) hoping he would leave balls up, and that he wouldn’t be the same.”

Singer actually got better as the game went on, striking out nine while allowing four hits, two walks and two runs in 6 2/3 innings. His 119 pitches were his season high as he improved to 12-1 with a 2.30 ERA in what was almost certainly the last home start of his college career.

“We dodged a bullet there with Brady in the first inning,” Gators coach Kevin O’Sullivan said. “He settled in and battled. Auburn ran his pitch count up, but Brady made an adjustment and got us into the seventh inning. He is a fierce competitor, and he needed to be that today.”

Mize, who entered the game leading the SEC with 12.4 strikeouts per nine innings, put up zeroes the first two innings. But Mize and Auburn (42-22) allowed four runs in the third, and the Gators – who have taken three of four games from the Tigers this year – never trailed again.