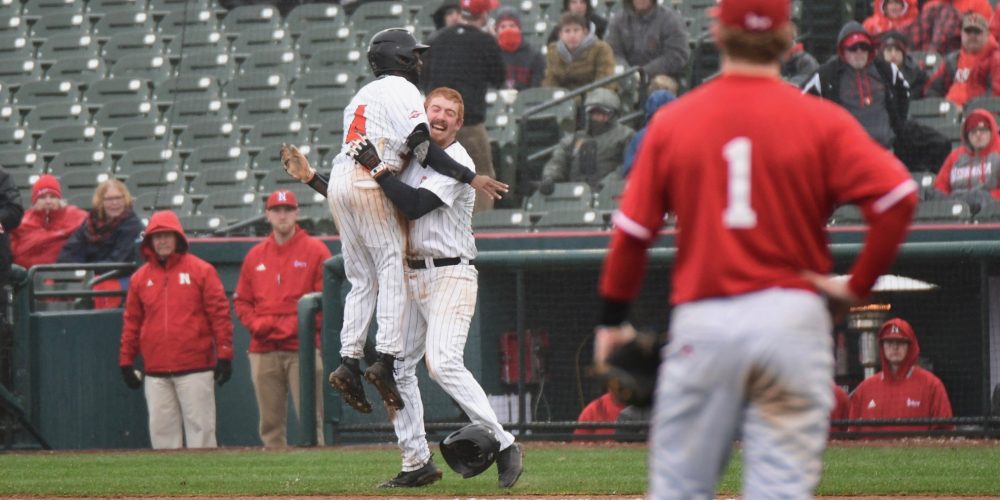 FRISCO, Texas — These are the kind of games you’re not supposed to win. When Nebraska erupted for eight runs in the fifth inning to take a 9-2 lead, Sam Houston State looked dead in the water… for about five minutes.

But as soon as Nebraska reliever Connor Curry started the bottom of the fifth by hitting leadoff man Jack Rogers, the door opened just an inch — and the Bearkats proceeded to take out the battering ram and blow that door off its hinges. The first six batters of the Sam Houston fifth reached safely, and all of them scored, as the Bearkats put themselves right back in the game, cutting the seven-run deficit to just a single run in the blink of an eye.

“We get the big inning there, then the leadoff first-pitch hits a guy,” Nebraska coach Darin Erstad said. “A Matt Deggs-coached team is going to continue to grind, and you have to stop the momentum.”

The wet, cold conditions Saturday at the Frisco Classic contributed to some inevitable defensive mistakes on both sides, but Sam Houston took full advantage of Nebraska’s miscues, and kept constant pressure on the Husker defense, as is customary for a Deggs-coached team. The Bearkats took a 10-9 lead one inning later when super-talented freshman Colton Cowser hit a two-run homer over the waterfall beyond the right-field fence (the only homer through the first four games of the tournament). Cowser said he was in a two-strike approach, shortening up and just trying to put the ball in play — but he took an elevated fastball in on his hands and pulverized it, showing off his tantalizing lefthanded power potential.

And even when Nebraska fought back to tie the game at 10-10 in the top of the ninth, Sam Houston had an answer at the ready. Once again, a Bearkat rally began with a leadoff hit batsman, and it ended with a walk-off single to right field by senior Darien Simms, lifting SHSU to a gut-check 11-10 victory.

It was just the second at-bat of the season for Simms, who had previously entered the game as a pinch-runner. On Friday, Simms was picked off first base to end SHSU’s one-run loss to Mississippi State, but just a day later he got to be the hero, and the Bearkats were thrilled to get the chance to mob him near first base after the winning run scored.

“My teammates were there for me when I made that mistake, but yeah, it was awesome,” Simms said of the journey from Friday’s disappointment to Saturday’s euphoria.

One of the neat things about this Sam Houston State team is its depth, and Deggs’ willingness to make use of that depth. The Bearkats have a penchant for making numerous substitutions over the course of the game, liberally utilizing pinch-hitters, pinch-runners and defensive replacements. That helps the entire roster feel engaged, knowing that their number could be called at any moment. It also has a way of leading to a close-knit clubhouse with full buy-in throughout.