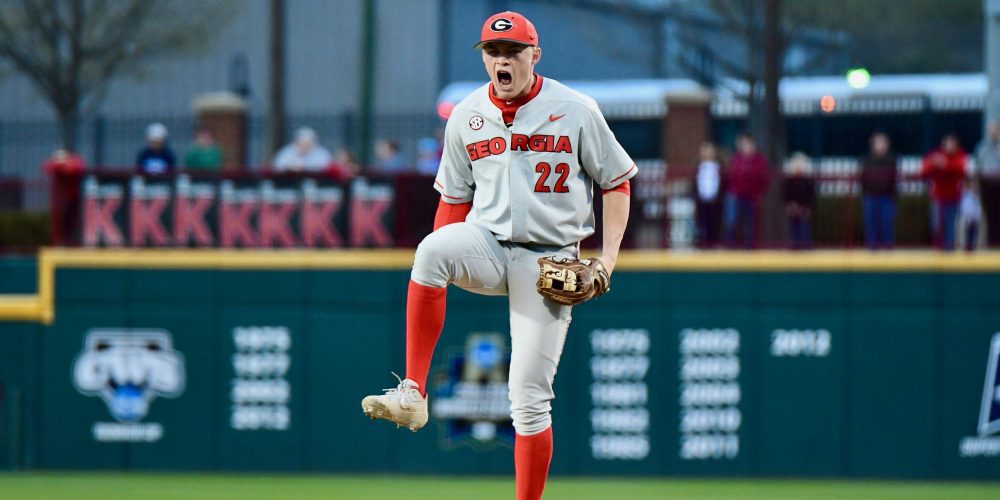 COLUMBIA, S.C. — For a team that has spent the first five weeks of the season in the top 10 of the D1Baseball rankings, Georgia has managed to fly under the radar a bit, thanks to preconference schedule that offered no opportunities for marquee wins. But this weekend, Georgia had a chance to make a splash with a road series at No. 22 South Carolina to open SEC play — and that’s just what the Bulldogs have done.

After sophomore ace Emerson Hancock turned in an overpowering start in Friday’s 6-1 win, Georgia clinched the big road series with a spirited 8-7 win on Saturday behind a tenacious offense and a characteristically excellent performance from its loaded bullpen. It was a good reminder that Georgia will be a major force to be reckoned with in the SEC this year thanks to its elite pitching-and-defense combination, its scrappy veteran offense, and its maturity. The Bulldogs showed serious fight as well as high-end talent on Saturday, quickly erasing an early 5-1 deficit in the middle innings and never taking their foot off the accelerator.

“Emerson was outstanding [Friday], and today it was just a completely different kind of game,” Georgia coach Scott Stricklin said. “The bullpen did a great job — [Will] Proctor, [Cole] Wilcox, [Zac] Kristofak and [Aaron] Schunk all combined to help out CJ [Smith], who wasn’t as sharp as he normally is. Down 5-1 in the fourth inning doesn’t look great, and we just had a ton of great at-bats. [South Carolina starter] Reid Morgan hadn’t walked anybody all year, and we drew several walks. Just found a way to get on base and got into their bullpen, and it was a really good grind type of win.”