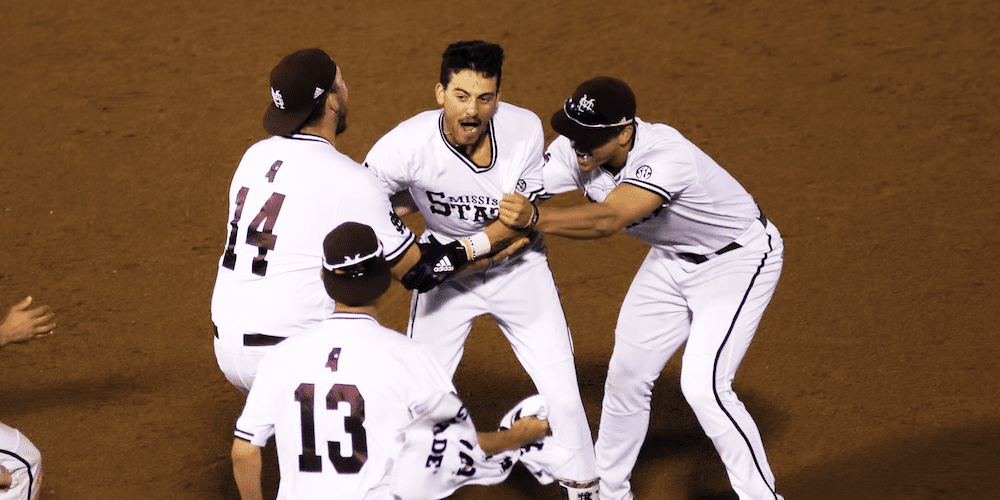 HOOVER, Ala. — Gunner Halter had something to prove when he stepped to the plate in the 17th inning of yet another wild affair between LSU and Mississippi State, one that lasted six hours and 43 minutes.

The Tigers and Bulldogs were deadlocked in one of the more epic games in SEC tournament history. MSU got off to a hot start, LSU rallied back and the two teams traded zeroes from the ninth inning through the point when the clock struck midnight.

As the innings went by, both teams had plenty of chances to score, especially the Bulldogs, who left 21 runners on base in the game. LSU left 17 on base. But one moment in particular stood out to MSU head coach Chris Lemonis.

Mississippi State’s Rowdey Jordan began the bottom of that inning with a single. The game was tied 5-5, but with Jordan on base, the wheels were in motion for the Bulldogs to finally win the game and send everyone home for some much needed sleep. That hunch was wrong.

Halter went to the plate and struggled to get a bunt down on two occasions, while striking out on an 0-2 count. As he entered the dugout, MSU head coach Chris Lemonis had a stern conversation with the talented infielder.

“It was huge, I jumped him in the dugout a little bit because he missed a bunt [in the 16th]. I just jumped him a little bit for that as he went back to the dugout,” Lemonis said. “Then, he walked around like someone took his dog. And he came out that last inning and gave us a great at bat that we hadn’t had all night long.”

Halter redeemed himself in the 17th. MSU’s Tanner Allen flew out to center field to begin the inning, while Justin Foscue reached first on a wild pitch and Dustin Skelton struck out. However, the pitch got away from LSU catcher Brock Mathis and Foscue advanced to second base. Jordan was intentionally walked, bringing up Halter in yet another big situation.