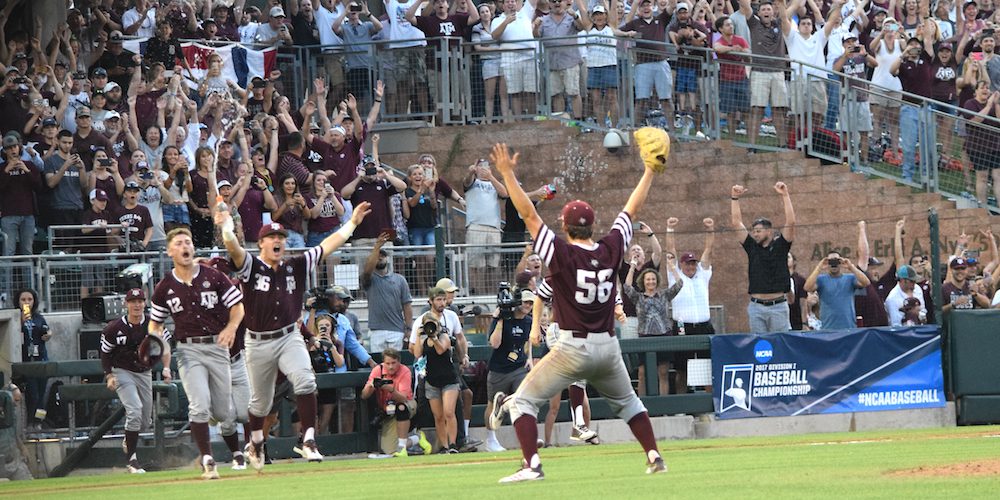 COLLEGE STATION, Texas — Trips to the College World Series often happen when you least expect them.

Texas A&M certainly knows how that feels. For the last two seasons, the Aggies had to sit in their dugout and watch as TCU celebrated back-to-back trips to Omaha. Two years ago, a throwing error at third base on the final play of a wild extra-inning affair helped propel the Frogs to Omaha, while last season, despite the Aggies being heavy favorites at home, a late-inning error, again at third base, helped TCU earn yet another trip to Omaha.

Some in College Station wondered when the Aggies might get another opportunity. One could argue that coach Rob Childress had two of the best teams in A&M history the last two seasons – yet, neither team ended the year at TD Ameritrade Park.

But this year’s team? The Aggies were ranked coming into the season, though to be honest, the debate to include Childress’ club in our preseason rankings was somewhat extensive. A&M had some key pieces back, particularly in way of quality pitching. However, the bulk and power of one of the nation’s premier lineups had departed.

Sure, the Aggies had some tumultuous moments throughout this season. Heck, they were one of the last four teams in the NCAA postseason field after scuffling the last three weeks of the regular season. But after a late-inning surge against Davidson on Saturday, this time with a little luck on their side for once by way of Alec Acosta’s collision-induced dropped infield popup – the Aggies advanced to the CWS for the second time in the Childress era with a 12-6 win over the Wildcats, who was America’s true Cinderella story the past two weekends. 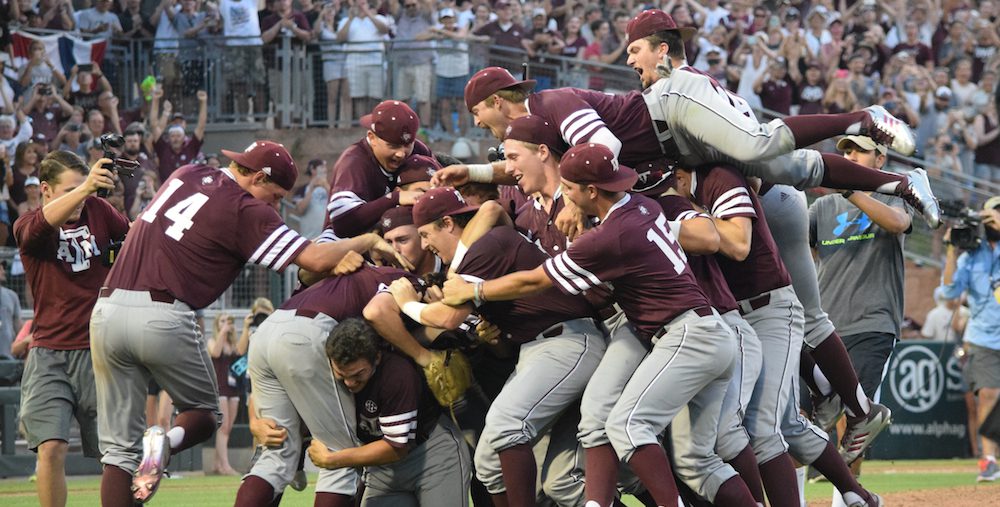 “What a hard fought Super Regional. Davidson is incredibly talented and well-coached and were well prepared. I couldn’t be prouder of our guys from top to bottom. All 27 made an impact the last two weeks and the more I do this, the more I realize it’s not always about the roster,” Childress said. “When you look at the roster, you look at the experience. Sometimes, it’s when guys on the roster make a decision together to do something special and make their breaks. Everybody on this roster gets credit for that.

“When you look back to the last couple years of heartbreak, I don’t think we would be at this point if it weren’t for guys like Michael Barash, Hunter Melton, Ryne Birk, Boomer White, JB Moss, Nick Banks, Kyle Simonds and many others. They got us to the door and allowed us to taste what it feels like and the pressure of being in a Super Regional. Our seniors led these 27 guys on the roster through the door this year.”

While the Aggies were in a state of euphoria and chants of “OMAHA” rang out as the sun set in the Texas night, for much of the afternoon, it looked like the 7,000-plus fans at Blue Bell Park would have to wait another day to potentially celebrate. Davidson’s impressive offensive lineup had success against A&M starting pitcher Corbin Martin after the first couple of innings, while soft-tossing lefthander Evan Roberts did a marvelous job for much of the afternoon. A&M slugged a pair of solo home runs in the third inning, but otherwise Roberts was outstanding with great command of a high-70s, low-80s fastball. He’d allowed two runs and had a 6-2 lead entering the eighth inning, and all the momentum was on Davidson’s side.

Then came one of the wildest sequence of events I’ve seen in a long time. The Aggies got a lead off single from outfielder Nick Choruby before Logan Foster flew out. Braden Shewmake then reached on a fielding error before Hunter Coleman roped an RBI double into the left-center gap, putting runners on third and second and down just three runs. Blake Kopetsky, whose third-inning miscue in the outfield led to a pair of runs, brought those two runners home on a two-run single up the middle, while the biggest play of the game and season for both teams occurred with A&M’s Jorge Gutierrez at the plate.

With bases loaded and two outs, Gutierrez hit a pop up in the infield. Davidson’s infield converged on the ball with third baseman Eric Jones colliding with second baseman Alec Acosta. Acosta had the ball in his possession going down to the ground on his back, but the ball popped out of his glove when he hit the ground. And per NCAA rules and affirmed by Davidson coach Dick Cooke after the game, he didn’t have control of the ball long enough.

Two runs scored. The Aggies took a 7-6 lead. And the game got out of hand after Nick Choruby came up again in the inning and roped a two-run single, while Walker Pennington put the game out of hand in the ninth inning with a no-doubt three-run home run to make it 12-6 A&M.

For as euphoric as the final innings were for the Aggies, Davidson’s players, particularly Acosta, were in a daze as the final outs of the game were recorded. Acosta, who left the game with an injury, entered the tunnel behind the Davidson dugout numerous times after the top of the eighth. In addition to his physical injury, he was hurting emotionally, too. He thought he let his team down. 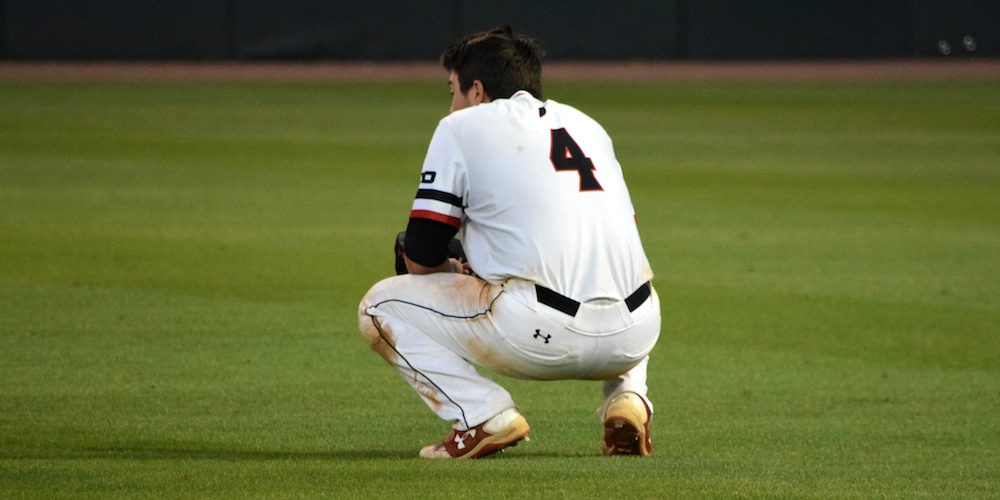 “I don’t know that anything drastically went wrong [in the eighth inning]. We didn’t play defense the way that we needed to,” Cooke said. “You are in a high leverage situation there. You’ve got to pay attention to how many times a pitcher has seen a group of hitters. We had, I thought, some good matchups in the bullpen with Austin Leonard, a good slider guy, and some other guys coming into the game. So, I think we just didn’t play defense at the right time, or well enough, and credit them for banging. That’s a huge part of baseball.”

And with that, one of the least expected Childress teams at A&M is headed to Omaha, the program’s first trip since 2011.

It’s been an interesting road to this point for the Aggies. Few teams in college baseball got off to a better start the first three weeks of the regular season before reality hit when A&M went to the Shriners College Classic in Houston. There, the Aggies had a commanding lead over nemesis TCU before blowing an unbelievable lead in the ninth inning and going on to lose an extra-inning affair. Corbin Martin and others were bewildered. Not again. A day later, the Aggies looked like they would regroup against Baylor before Tucker Cascadden hit a walk-off grand slam to send Childress’ club into a funk. A&M proceeded to get swept by Kentucky at home before losing the first two games to Vanderbilt the next weekend, getting blown out in the second game of the series and dropping to 0-5 in the SEC.

A&M held a players-only meeting after the blowout loss to the Commodores and turned the season around winning the series finale in Nashville. When asked about having doubts this team could get to Omaha, Childress pointed to that series against Vandy and the SEC start.

“Certainly so. If you don’t say you question yourself at 0-5 in league play, I think you’d be lying to yourself,” he said. “For us to find a way to win Saturday at Vanderbilt was gigantic. Going on the road to LSU the next week and finding a way to win two was also big. And April turned out to be a pretty good month for us.”

The Aggies clearly left things to chance in May with a slow finish to the regular season. But things changed when A&M saw its name pop up on the screen during the NCAA Selection Show. For once, Childress said, there was some serious angst in the locker room about whether the Aggies would have their name called. They did, and Childress admits that gave his team a new lease on the season.

Now, they’re headed back to Omaha with perhaps the least likely team imaginable, especially when compared to the juggernaut clubs the last two seasons. 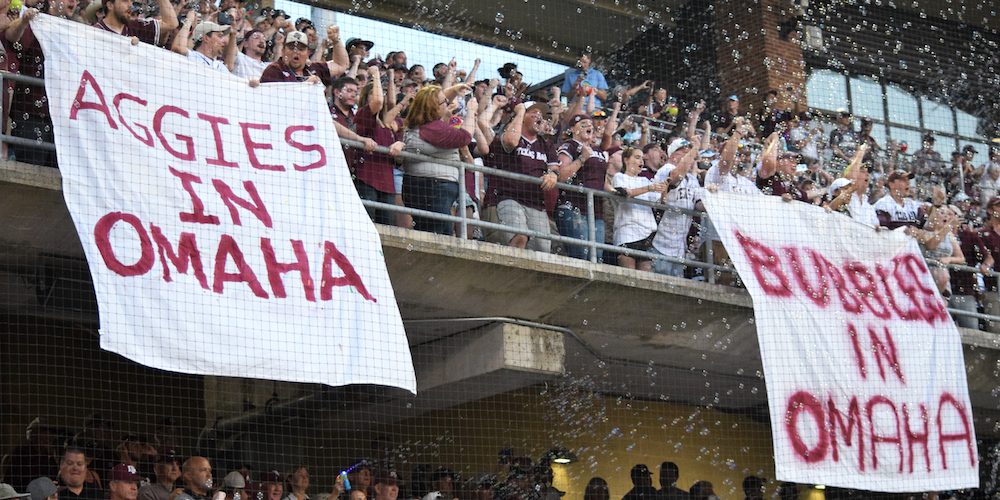 As players ran on the field and mobbed teammates as the final out was recorded on Saturday, some coaches in the dugout exchanged high fives and hugs. Childress? He slowly put his hands on the brim of his hat and otherwise didn’t move. After the last two seasons of heartbreak with serious national title aspirations, he was finally on the winning end of things.

He was going to let the improbable soak in.

“That’s why I do it. To sit there and enjoy that moment with the smiles on their faces and hope nobody gets hurt. To listen to the locker room right now, it’s special,” he said. “That’s why we spend so much time away from our families. I have such a great time with these guys, and to see their joy is so worth it.”