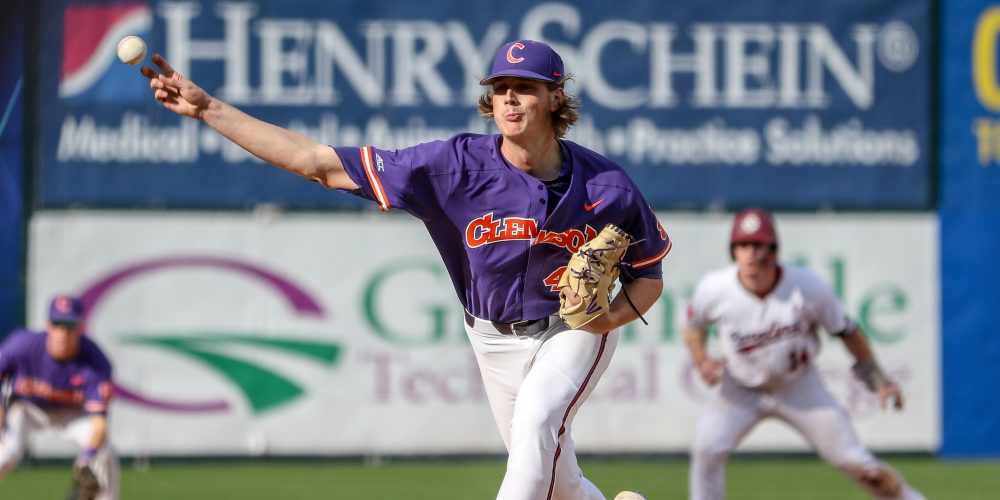 GREENVILLE, S.C. — Holt Jones entered the game and immediately had a problem. But it wasn’t the three South Carolina runners on base or the fact there were no outs.

The Clemson sophomore reliever couldn’t find his footing, literally. As he tried to warm up, he kept landing awkwardly because of a hole that had been created by the five previous pitchers that had toed the rubber for both teams through the first five and a half innings.

He called the umpire out and asked that the Fluor Field grounds crew fix the area where the 6-foot-8 righthander was landing as he strode forward with each pitch. A seven-minute delayed ensued. Fans cheered each time a new grounds crew member ran to the mound with another tool to help fill in the hole. Holt was booed by the Gamecocks fans among the 7,432 in attendance. It was the last time they had anything to cheer or jeer about.

Holt locked down the final four innings, including getting three straight outs to end the sixth inning, to help Clemson (8-2) even up the rivalry Palmetto Series with an 11-5 win over South Carolina (8-2).

Holt struck out pinch-hitter Jordan Holladay on three consecutive fastballs that clocked in on the stadium gun at 96, 97 and 96 mph (that may have been running a tick high). An RBI groundout and fly ball later, Holt had minimized the damage, allowing just one runner to score in a high-intensity situation where one timely hit could have gotten the Gamecocks right back in the game.

“The story of the day was Holt Jones,” Clemson head coach Monte Lee said. “Holt came in and gave us exactly what we needed. We were able to extend him and shut their offense down. He pitched out of some big jams, came in, got some huge outs for us. That was the difference in the ballgame. He was able to stop their momentum on offense because they got a really good offensive club.”