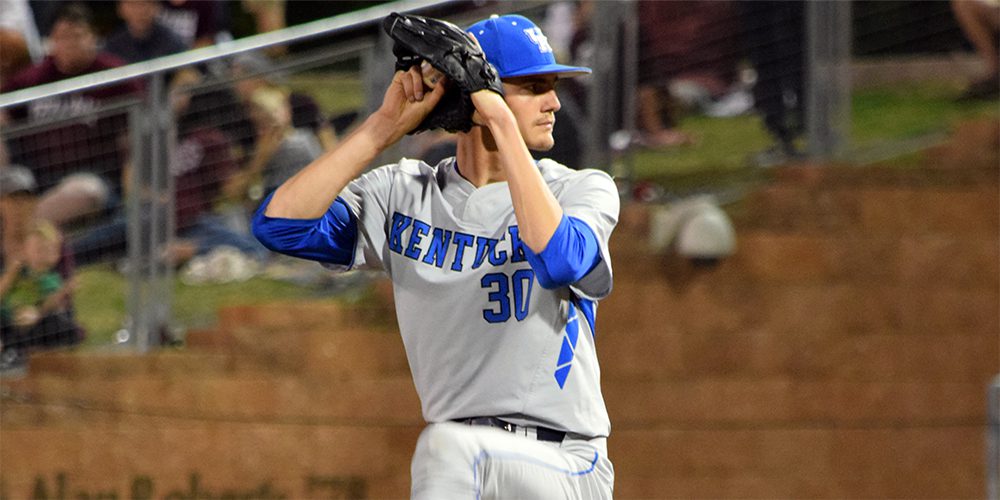 COLLEGE STATION, Texas — Sometimes the simplest change can make all the difference, and Kentucky sophomore righthander Sean Hjelle is a testament to that.

Though the lanky 6-foot-11, 215-pounder, had some positive moments already this season before his start at Texas A&M on Friday night to begin Southeastern Conference play, he also had battled some inconsistencies, which led to some high run totals. He and pitching coach Jimmy Belanger met earlier this week to, once and for all, put the issues there were holding him back to bed.

That discussion followed by some simple changes made the difference on Friday, as Hjelle put together a strong start and struck out a career-high nine batters in a 6-0 win over the Aggies.

“He’s had some good outings in the past, but to date, this is definitely his best,” First-year UK coach Nick Mingione said. “I talked to our guys before today about showing up and wanting to compete and learn against these guys. Last week wasn’t his best outing outside of one inning, and he made an adjustment with Coach Belanger. That’s now twice he’s made adjustments, and he pitched great. But also, how about our defense? They crushed some balls earlier on and our guys made plays. That really helped him, too.”