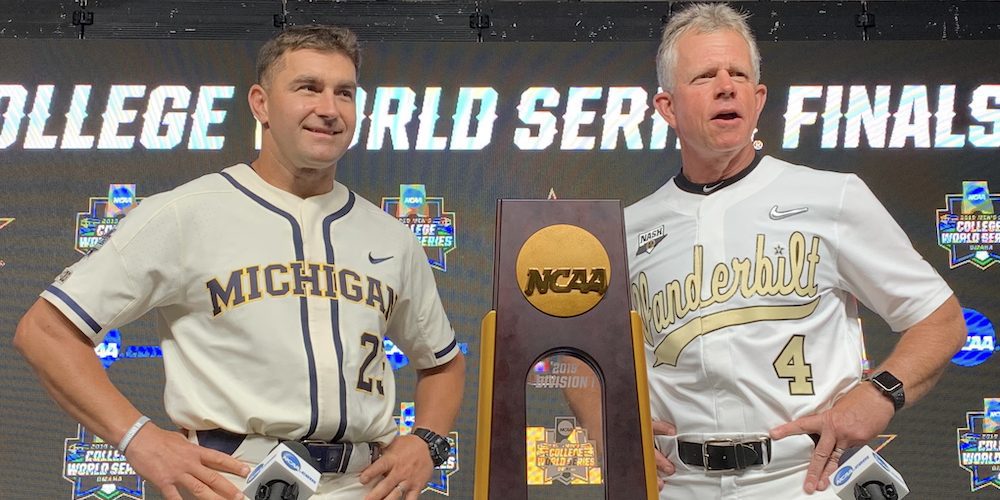 OMAHA — Michigan and Vanderbilt will play for a national title beginning Monday night.

The two programs have some similarities. Erik Bakich and Tim Corbin are best friends. They do an annual trip together. They coached together at Clemson — Bakich was the volunteer coach —  before Bakich became a full-time assistant at Vanderbilt before moving on to be the head coach at Maryland. The two programs also have one big item in common: They have advantageous scholarship situations, which shouldn’t be viewed as a negative in college baseball. If anything, it should be viewed as visionary in a sport where those partial, 11.7 scholarships are treasured. We should be doing much more to increase scholarships and aid, not less, so for that, I commend Michigan and Vandy.

But while their aid situations are where the two schools see eye-to-eye from an administrative standpoint, their institutions and conferences are a world apart when it comes to adding a third full-time assistant.

And that needs to change.

The Southeastern Conference submitted legislation last summer to add a third full-time assistant. Its dissenters came out after the vote proclaiming the SEC essentially added the softball assistant language after it was submitted last August.

We spoke to several sources inside the NCAA, SEC and other leagues about the legislation. The legislation was never changed after the fact. It always included softball and administrators and detractors knew it. They thought the rest of us were naive enough to believe the spin job.

The facts are that the legislation was submitted with baseball and softball included, never changed, and the voted failed 36-25-3. Some athletic directors we spoke with thought the money for this position should be used to benefit student-athletes with more scholarships and aid. I’m all aboard that train, but those same administrators think we’re all naive. I know the game. We all want more scholarships, but that is not an overnight fight or even a year-long fight. That will take years to accomplish.

So, by deflecting the third assistant vote for more scholarships and aid, administrators are essentially pushing that issue and the additional assistant debate down the road for someone else to handle. And that’s wrong.

There are administrators willing to take another look at it. Texas athletic director Chris Del Conte and Oregon State’s Scott Barnes, both ‘no’ votes on the vote, say they’d fully support legislation that only includes adding a third paid assistant in college baseball, just not one that includes an additional softball assistant. The idea behind that is that while softball would be fine having another assistant, they don’t need one at the moment and are more focused on the scholarship issue. Unfortunately, most Big Ten administrators have been mum on the issue, and of those we’ve talked to who have issues with how their league voted, they aren’t willing to talk on the record about it. More progress needs to be made on the issue, but there are rumblings out there that a new vote on a similar proposal could come well before that date in spring of 2022.

While the Southeastern Conference voted unainmously amongst coaches and administrators to add a third paid assistant in college baseball, the Big Ten was on the opposite side of the spectrum. The league’s head coaches voted overwhelmingly in favor of the proposal, whereas almost all the Big Ten administrators voted against the legislation. The only two Big Ten schools we have confirmed as voting in favor of the legislation? Rutgers and Indiana.

Given the reality of the situation and their respective institutions’ votes, Michigan’s Erik Bakich had to carefully choose his words when asked about the third assistant vote, while Vandy’s Tim Corbin went on an educated, but lengthy expose about the vote and life of a volunteer coach. Mississippi State’s Jake Mangum put the topic back on the forefront earlier this week with his impassioned statement after his team’s elimination.

“You know, I thought it was low-hanging fruit and an opportunity to elevate our game. Just like all coaches out there, I was disappointed that they didn’t pass. I just think it’s — I think the growth of our sport should always be on the forefront, by people who care about it, and that was one way to grow our sport,” Bakich said. “I think scholarships are a real issue, but that was something I thought could very easily have been passed. I haven’t talked to — I obviously haven’t talked to all athletic directors who voted against it, but I’m sure they had their reasons, and hopefully this will be something that in the future can be looked at and can be considered and passed.

“I do think having that coach, to be able go out and recruit, as a Northern program, where our fall, and this is all Northern programs — our fall is pushed up because we’re fighting the weather, so our fall ball starts earlier in September,” he continued. “And to be able to have your recruiting coordinator and your volunteer coach or that assistant be able to go out on the road and recruit and keep your pitching coach home to develop those pitchers instead of the recruiting coordinator and the pitching coach always out, that’s obviously a benefit. It can do so much for our game of bringing in quality people, allowing our student-athletes to be maximized. Why we don’t count that guy, I don’t understand why we don’t count him. I think we all agree having an additional body would be great, but I think we all agree that having someone serve in a volunteer capacity and not get paid doesn’t seem right, either.”

Michigan’s run at the College World Series has opened plenty of eyes around the country.

Many of us inside the college baseball community hope it’s an opportunity for Big Ten administrators to wake up and smell the coffee so to speak. But the Wolverines’ presence in the CWS Finals has potentially larger ramifications than that singular issue.

Much like anything in business and life, leaders, administrators, CEOs, typically need reasons to do something. And frankly, the Big Ten doesn’t have a robust history of doing big things on the national stage, at least in the modern era. Indiana reached the CWS seven years ago, the league continues to get better across the board, but missing? A chance to win a national title in the sport, something that puts everyone on the map and at full attention. The league is aiming for its first national title since 1966 this week, thanks to Michigan.

Players like Michigan’s Joe Donovan take great pride in being the group that’s putting Michigan and the Big Ten on the map. He feels like this run gives teams in that league hope that they, too, can compete for a national title.

“That’s definitely one of the choices that I wanted to make when I decided Michigan — to trust in the program and try to help bring Midwest baseball to where we all know it can be because so many good programs around the country really live and breathe with Midwest kids,” Donovan said. “It’s just been so much fun being able to wear a Midwest team across my chest and to play for such a great program.

“I think so many of the other guys just want to see it get back to that point and bring the Big Ten back to where it’s just a great baseball conference,” he continued. “Just going through that, it’s been a blast.”

Michigan’s run also could have a ripple effect within the Big Ten.

Nothing grabs Ohio State’s attention more than Michigan going on a magical run in the college baseball postseason and potentially winning a national title. Ohio State athletic director Gene Smith was a strong proponent against adding a third assistant and was at Iowa State when the athletic department began discussions on cutting baseball. The program was slashed in 2001, just a year after Smith left ISU for Arizona State. Could this Michigan run be what catches his attention and makes him realize that college baseball is a major sport and should be treated as such? We’ll soon find out if this run resonates with Smith and other leaders within that league.

There’s also the curious case of Wisconsin. Back when Oregon State won back-to-back national titles, Oregon boosters came to the conclusion that the Ducks couldn’t sit idle while their rivals to the north, Oregon State, won back-to-back titles. So, they brought back baseball. Granted the Ducks haven’t caught up with the Beavers just yet, the pieces are in place to do so at some point. Could Barry Alvarez and Wisconsin see the trajectory Michigan baseball is on and decide to add a program in a talent-rich baseball state like Wisconsin? We might soon find out.

Now that Michigan has reached the pinnacle of college baseball, it’s time for the rest of the Big Ten and even the Wolverines to establish consistency.

Do that and everything else should fall into place. More administrators will support programs with more robust salaries and facilities upgrades, academic rules could be eased to make it a little easier for prospective recruits, more recruits in the region will spurn the glamour of the SEC and ACC to stay at home and become the next Joe Donovan in Omaha.

And to top it all off, perhaps the next time we vote on a third assistant, it will be considered a no brainer like it was in the SEC and other leagues.

“If we can make what Indiana did and what we’ve done at Michigan commonplace in the Big Ten, it would be huge,” Bakich said. “All of us coaches need to put the onus on ourselves to give the athletic directors, administrators and more reasons to support baseball and to be proactive in helping baseball.

“If a Big Ten team can play for a national title, then maybe other programs can to do the same, or perhaps at least make a deep run into the postseason,” he continued. “There’s plenty of talent in the Big Ten right now. And in baseball, anything can happen. Regardless of league, what we need to do as coaches is figure out how to get to our programs to the point where we can really push the envelope on a wide range of issues, including the third assistant.”

Michigan is playing for a national title this week and its season will end in a few days. But this trip could have wide-ranging reach in the Big Ten and far beyond, and for that, it’s only the beginning.