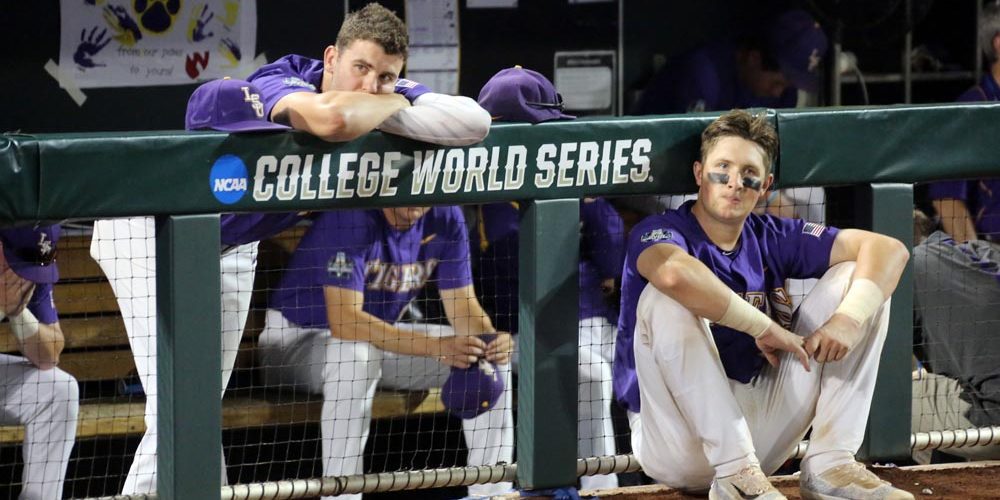 LSU’s Seventh Not Meant To Be

OMAHA — Sometimes hunches prove to be hogwash, and, well, sometimes they come true.

Unfortunately for LSU, the hunch walking into TD Ameritrade Park on Tuesday proved to be right. As fans assembled and walked into the ballpark, the flags in center field were blowing straight in, weather reports suggesting the winds were whipping up to 25 mph.

For much of this College World Series, the opposite was true, the flags and the balls typically blew out, and with blunt force at times. But not tonight, not when the powerful Tigers needed the wind to blow out to help them force a third game to get the ball in the hands of almighty righthander Alex Lange.

LSU has a versatile lineup capable of winning games without the long ball, but the recipe for success at times, especially in Omaha, was the long ball. Catcher Mike Papierski hit two homers to help eliminate Oregon State and get to the CWS Finals, while as a team, the Tigers hit eight homers in the CWS – the most by any team since the event moved to TD Ameritrade. Furthermore, the Tigers had hit home runs in six of their seven CWS games entering tonight.

But a seventh national title simply wasn’t meant to be. The Tigers were unable to get into a consistent flow against the Florida pitching staff, specifically starting pitcher and righthander Tyler Dyson, who controlled the hard-hitting Tigers with a 91-93 mph fastball, along with a changeup and slider.

“We’ve won five championships this season, won our bracket out here, and we just lost a couple of heartbreaking games in the Finals,” LSU coach Paul Mainieri said. “But I know the players to my right and all the players in the clubhouse gave it everything they had. And I don’t think they have anything to be ashamed of. And I hope that the people of Louisiana, Baton Rouge, New Orleans, et cetera, are proud of our team.

“They’re a great group of kids, they’re wonderful young men. And this is just the cruelty of what we do,” he continued. “You know, you’ve had seven coaches now sit up here and say the same thing, that you go into it with hopes of winning the national championship. It’s an awful feeling to come up a little bit short, but that doesn’t mean we’re proud.”

It will take a few days for the funky feeling of this game to wear off with Mainieri and his players. From the first pitch on, Mainieri just had a bizarre feeling about the game for good reason.

The Tigers are an elite defensive team, but didn’t look the part in the loss to the Gators. For instance, an error by Nick Coomes began the game and the Gators brought home a run in the first after a pair of singles. Senior lefthander Jared Poche did work out of a massive log jam by getting three-straight outs, but the tone was set. LSU made two more errors in the second inning, one of them an uncharacteristic booted ball by one of the nation’s best third basemen in freshman Josh Smith.

This LSU team was a treat to watch throughout the season.

And Poche, who has performed so brilliantly on this stage, battled, but scuffled at times as well. His first two innings were ugly, thanks in part to those three errors, but also ran into trouble in the third when Florida began the inning with a pair of singles. Poche eventually got out of the inning unscathed, but again, everything tonight just seemed hard for the Tigers.

The feeling of frustration carried over to LSU’s potent offense. LSU was unable to generate any sort of offense the first six innings despite getting some runners on base. And when they threatened in a big way, things just didn’t go their way.

In the seventh, the Tigers led off the frame with a single from Zach Watson and an RBI double from Josh Smith. The wheels of a comeback seemed to be in motion. But later in the frame, with Smith at third base, catcher Mike Papierski hit into a 4-6-3 double play. The run appeared to score, however, Jake Slaughter, who hit a single in the at bat before to put runners at the corners, slid well off the bag and was called for runner’s interference. Inning over, no run scored. The Tigers were crushed.

LSU made one more valiant effort in the eighth to make its mark in Omaha, but again, it just wasn’t meant to be. That was the story of the CWS Finals.

“The whole game was kind of bizarre. Jared goes out and the first batter hits a routine ground ball and we don’t make the play and it leads to a run, and then we get picked off and we weren’t able to throw them out at second base and they get a base hit,” Mainieri said. “So, you feel like Jared’s pitching really well, and yet you’ve given them two runs.

“We felt snake bit a little bit tonight,” Mainieri continued. “The way the game started defensively the first couple of innings and those two innings offensively, it just felt like it just maybe wasn’t meant for us tonight.”

The feeling for these Tigers is that of pain and heartache. With Poche and Lange rested and ready for the final two games of the series, they still felt confident. Even Florida coach Kevin O’Sullivan said after the game he rolled the dice and threw Jackson Kowar out of the bullpen because he didn’t want to face Lange in the series finale. He didn’t like his chances against the big-game pitching righty. LSU fans felt confident, too. After all, there’s a reason the Tigers had incredible support during the CWS, but particularly, too, during the Finals. They thought everything was setup just how they wanted it. 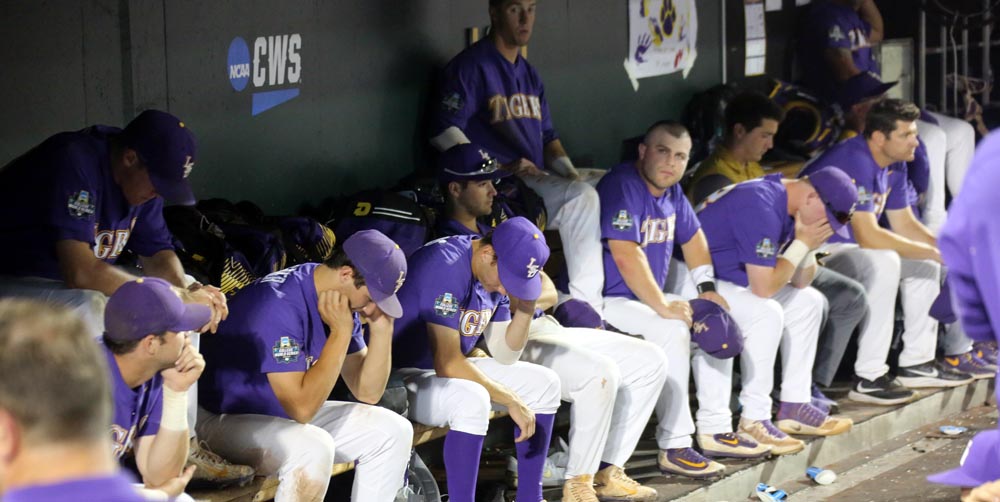 The Tigers have nothing to hang their heads about. (Eric Sorenson)

But in the end, that didn’t matter, just as it didn’t matter that Oregon State finished the year with six losses and didn’t even play for a national title, thanks to the Tigers.

But the heartache LSU experienced tonight shouldn’t diminish what was an incredible season. The passion and glory surrounding the LSU program is something I never take for granted as a national writer. You see the passion in the eyes of the coaches and players and see it in the faces of the fans, many whom sat around me stone faced, some with tears in their eyes as the Gators dogpiled on the field after winning the national title.

What a team this was to watch throughout the season. After experiencing heartbreak in the Baton Rouge Super Regional to eventual champion Coastal Carolina, Kramer Robertson, Greg Deichmann, Cole Freeman and Jared Poche all decided to return for another season, Deichmann the lone non-senior who was a draft-eligible sophomore last season. They weren’t satisfied with how last season ended. They wanted another opportunity to win a national title. They didn’t accomplish that goal, but they sure were close.

“It’s a special team, it’s tough. You don’t get to play with them again, and I think that’s the hardest thing,” Robertson said. “You always think you’re going to win it, and the finality of all of it is tough. But I’m at peace with my career, and I’m sure Jared and others are as well.

Moving forward, LSU will have a tough time replacing the likes of Lange and Poche in the weekend rotation, but the emergence of Zack Hess and Caleb Gilbert give the Tigers real hope on the mound, while the offense will be loaded as usual with Zach Watson, Josh Smith, Antoine Duplantis, Jake Slaughter, Nick Coomes and others coming back, along with a talented incoming class.

But for tonight, it’s all about what the 2017 team accomplished. The season didn’t end the way Mainieri and his players wanted it to, but what a ride it was.

These Tigers will be remembered for a long time, and for good reason.