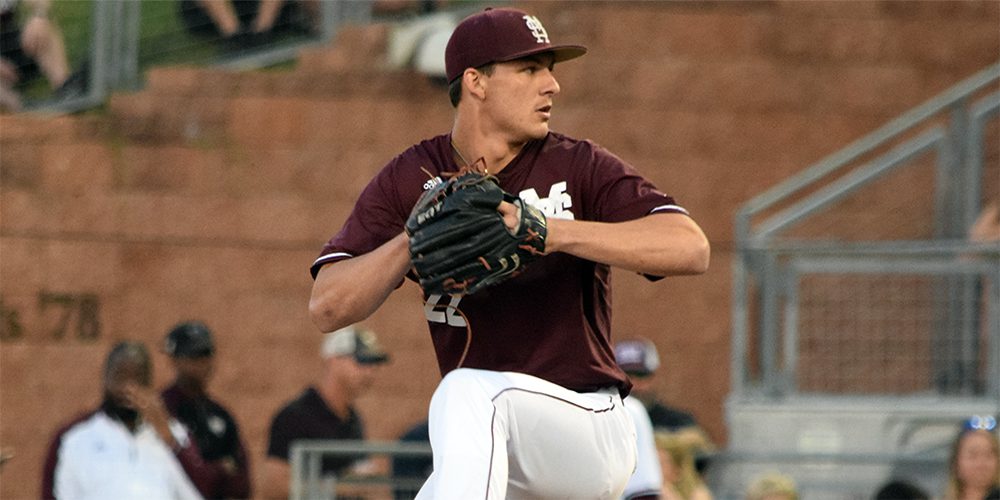 COLLEGE STATION, Texas — Maybe there’s no such thing as coming back down to Earth for Mississippi State.

The Bulldogs entered the season with high expectations. They garnered consideration in our preseason rankings and certainly were expected to reach the NCAA postseason. That was before Andy Cannizaro’s club had a slew of injuries that would keep a hospital waiting room full. Just this week, the Bulldogs lost yet another player in Hunter Stovall, who will miss a few weeks because of a broken hand and won’t come back until at least the LSU series.

MSU has so many injuries that Cannizaro didn’t even travel a full travel roster to A&M. So, when lefthander Konnor Pilkington only went 3.1 innings in the series opener, the Bulldogs were in a bind and had to have a strong start Friday from freshman righthander Denver McQuary.

Just as he did many times throughout his high school career as a record-setting interceptions machine on the gridiron, tonight, the hard-nosed, 6-foot-2, 187-pounder, put the Bulldogs on his back in an impressive 5-1 win over the Aggies.

“I thought he was outstanding tonight. We talked earlier about how good of an athlete he is. Every time you put him out on the big stage he pitches great and just really rises to the occasion,” Cannizaro said. “He did a great job tonight with his fastball and really commanded his secondary stuff well, too. He pitched with a lot of confidence and he’s just one of those guys that the bigger the crowd, the more willing he is to step up. He embraces it.”

Under normal circumstances this season, McQuary likely would have a role well down the depth chart and wouldn’t be forced to start a game of this magnitude in the heat of the SEC title race. However, with injuries come opportunity and the righthander has seized the moment and blossomed the past few weeks.

Cannizaro thrust McQuary into a big situation two weeks ago in a midweek bout against in-state rival Ole Miss. There, the former football player had some command issues at times, walking five batters and striking out just four, but also showed maturity by finding ways to escape jams. He finished that performance allowing just two runs in 5.1 innings, while following it up with three shutout innings out of the bullpen last weekend against Auburn.

He was on another level against the Aggies.