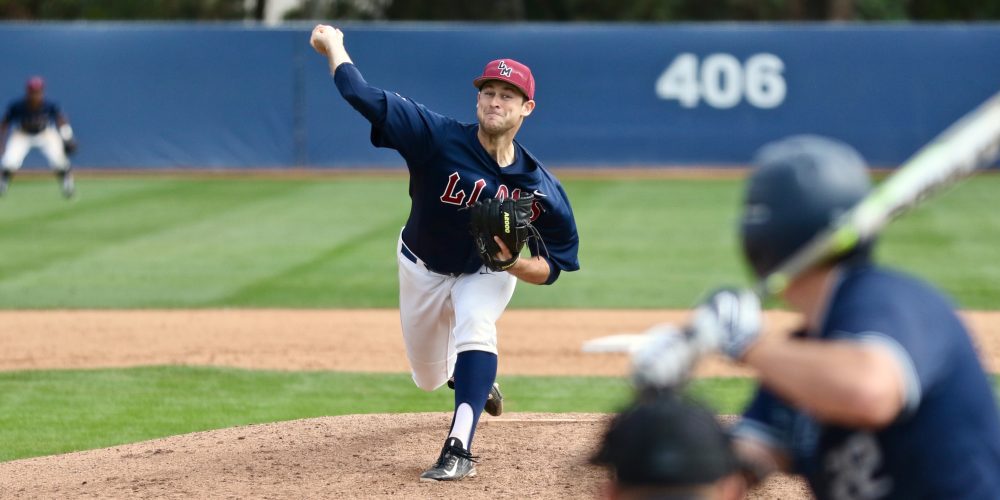 Junior righthander Cory Abbott was freezing cold after his teammates doused him with a bucket of Gatorade.

Someone had to cool Abbott down after he had been on fire pitching the first perfect game of the 2017 season and first in the history of the LMU baseball program.

What happens after you are on fire throwing a perfect game?

Abbott was impeccable Saturday afternoon sitting down each of the 27 batters he faced in the series rubber match against BYU. He threw 79 of his 106 pitches for strikes and stuck out 13 batters in a 2-0 win at Page Stadium. He produced the rarely seen triple digits of a 100 game score — a feat that in the history of Major League Baseball has been accomplished only thirteen times in a nine-inning game.

BYU’s lineup featured six batters hitting over .300, including one over .400, but it mattered not against Abbott. He diced up anyone that stepped in the box, striking out eight of the 10 batters he encountered at least once. His offense gave him a lead in the sixth inning when Phil Caulfield scored on a Niko Decolati bloop single to center field and added a run on a bases loaded walk in the eighth inning.

In between, Abbott got a little bit of help defensively. In the seventh inning, Daniel Schneemann attacked a 1-0 fastball and hit a liner into right where Decolati came in to make a diving catch. But even defensively, the most impressive player on the field was Abbott. The very next batter, BYU’s leading hitter Brock Hale, pounded a chopper up the middle that may or may not have found its way through the middle. Instead, Abbott fired his glove up and snatched the ball out of the air.

“I mean I didn’t even know what was going on. I just flew up and it came down in my glove.”

As the innings progressed, Gill paced the dugout. He tried not to think about all the zeroes on the board and definitely couldn’t talk about it. No one mentioned the no-hitter and definitely not the perfect game. Even Florer, who threw the last LMU no-hitter in 2013, didn’t have any words of advice for the situation. He focused on how Abbott’s arm was feeling and together they discussed plans of attack for the upcoming hitters. Everyone was thinking about it, but no one wanted to be the jinx.

“Once it got past the sixth inning, you know, it’s on your mind and you’re just trying to fight it a little bit as best you can,” Gill said. “He went out there and did it. It was unbelievable.”

Florer said it was more rewarding than his own no-hitter. Abbott was all smiles as he celebrated with his family after the game. The ice bath couldn’t fade his excitement.

The Lions coaching staff needed more out of Abbott.

After he got roughed up two weeks ago in a 16-1 loss to Cal Poly, there was a sit-down discussion. Thirteen times Abbott got to two strikes against the Mustangs. More of those turned into positive at-bats for Cal Poly (6) than strikeouts for Abbott (5).

“He was getting ahead of hitters, but he wasn’t finishing,” Gill said, “so we had to work on some finishing pitches with him. To his credit, he did the work, exercised it last week in San Francisco and then today, I don’t even know what to say about today. I’ve never seen anything like it.”

Against BYU, Abbott got to two strikes 17 times. Only four didn’t result in strikeouts.

Five of his 13 punchouts came on a sharp-breaking 86-mph slider that Abbott only just recently harnessed into a strikeout pitch.

“I saw that they were biting down,” Abbott said of the pitch. “They were a very fastball-aggressive team. I was kind of offsetting it with the slider because my slider is pretty tight and firm. They were going to swing right over for the majority, so my gameplan was throw off my slider with the outside fastball.” 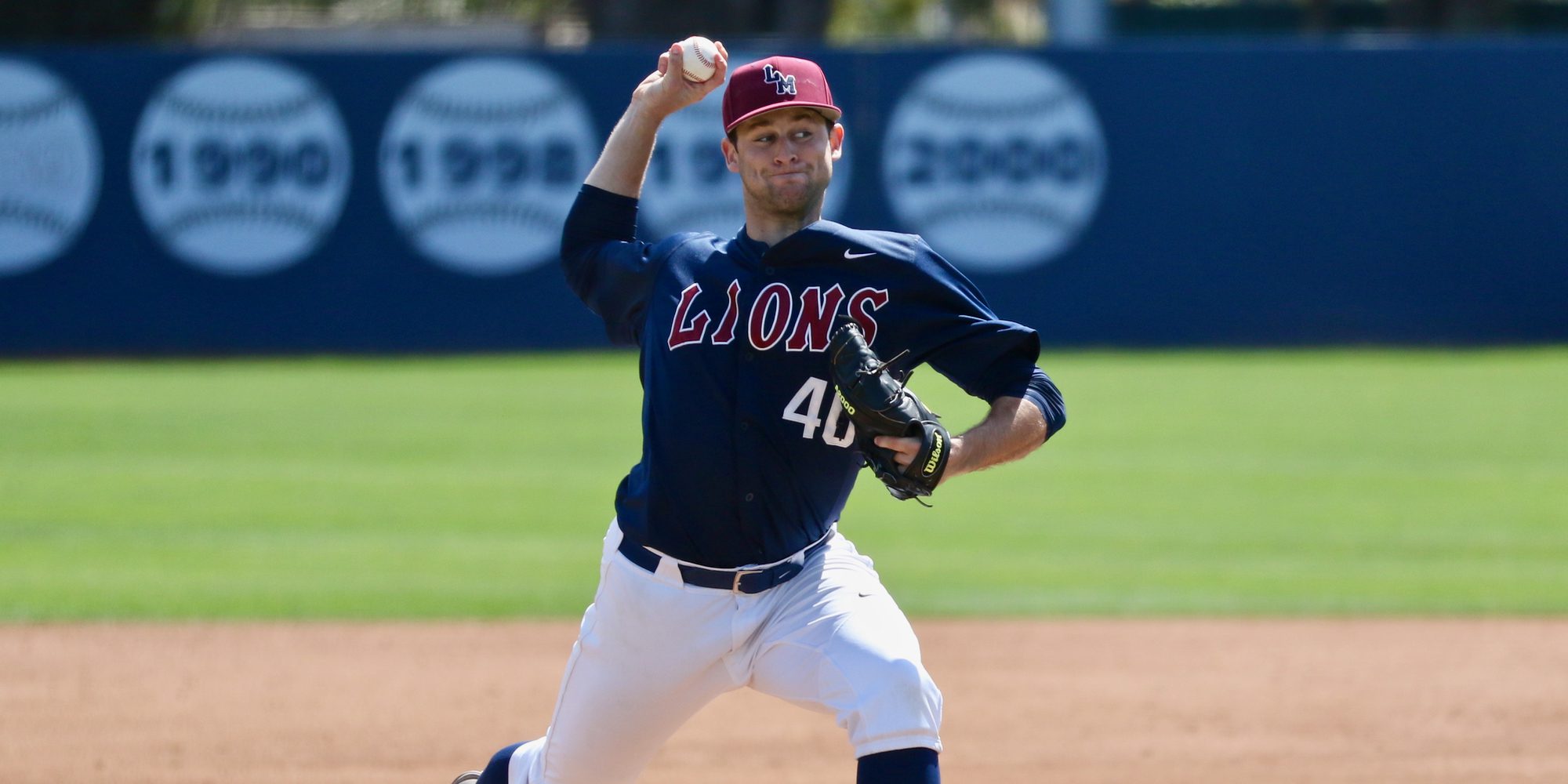 Corey Abbott struck out 13, including five on a developing slider. (Shotgun Spratling)

A 78-80 mph curveball had been Abbott’s go-to pitch since he first got to LMU from Serra High School in San Diego, but over the last year he has been developing the slider. It has been a continuous work in progress that has improved slowly but surely.

“It’s been a good pitch kind of early in the count, kind of just your glove-strike pitch. He’s turning that page with being able to take that as a two-strike execution pitch,” Florer said. “Realistically, it wasn’t until last week and last weekend against San Francisco that you could really tell there was real cut to it.”

Abbott got into 15 two-strike counts at San Francisco. Eight went for strikeouts. Five more produced outs. He got a taste of success, giving up two hits and two unearned runs in seven innings. That helped feed into Abbott’s confidence, particularly with the slider.

“The conversations I’ve had with him, it’s been more of a mentality, realizing that he didn’t have to do anything special,” Florer said. “That pitch was plenty good enough. That’s what guys professionally are probably going to be drooling over. It’s only going to get better. He’s going to continue to develop and he’s a special kid, so he’ll be fun to watch.”

As Abbott warmed up in the bullpen Saturday, neither he nor Florer foresaw such a special outing in the works.

“I wish I could say, ‘Oh my gosh. It was electric in the pen,’” Florer said. “It was more so just the last 10-11 days and couple of weeks of catch-play. It’s been on the front end where it’s turning into something good, something pretty darn good.”

Abbott wouldn’t even admit to feeling able to locate his pitches in any spot. Instead, he credited his conviction in throwing each pitch.

“It’s not like I felt like I’m going to hit my spot every time, but it’s ‘I’m going to give myself 100 percent to try to throw there’ and hopefully, it beats the hitter.”

Against a predominantly right-handed lineup, Abbot started with the gloveside fastball. By popping the mitt repeatedly with a 91-93 mph fastball, he set up up his slider. He repeatedly threw the fastball on the corner and then started the slider in the same spot, breaking it out of the zone for swings and misses. Five of his strikeouts came on sliders. Then by throwing the slider, he set up other pitches.

As the plate shifted in the hitters’ mind with them keyed on trying to make contact with a slider dancing off the outside corner, Abbott was unafraid to bust them back inside with a crisp fastball, often locking them up or forcing weak contact. 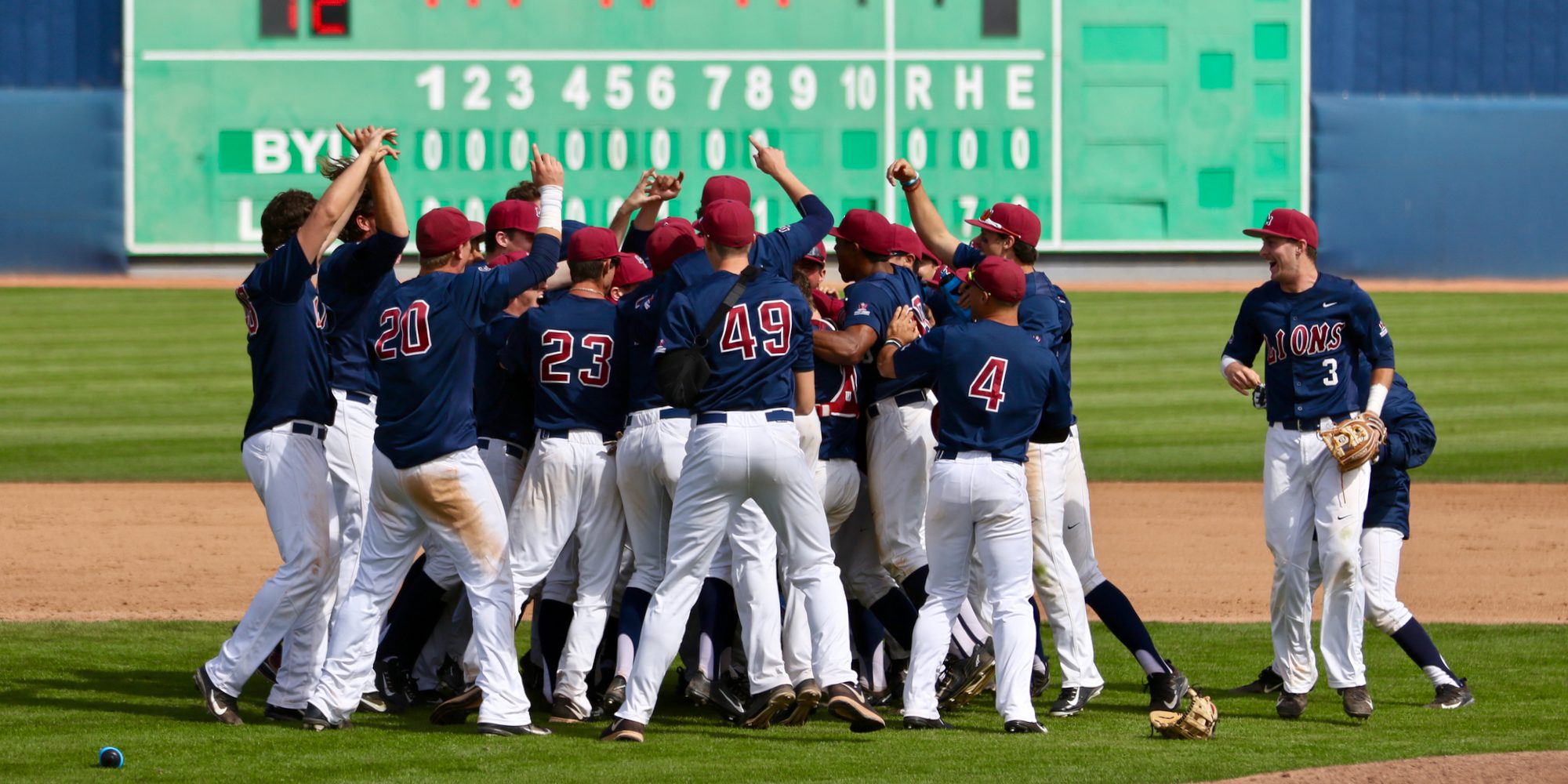 Nothing but zeroes on the board for Cory Abbott. (Shotgun Spratling)

Abbott has the best pure stuff of Loyola Marymount’s weekend starters. While he was still throwing 92 in the ninth innings, Blake Redman and Brenton Arriaga in front of him don’t even reach 90 mph. But rather than setting their rotation on pure stuff, the Lions have rewarded Redman and Arriaga for their ability to pitch. Both entered Saturday with better numbers than Abbott, but Abbott gives LMU a potential weekend ace in the hole that has kept the Lions from losing a weekend series this season.

“There’s something to be said about coming into these Sunday games and having that back-pocket Cory on the Sunday, who has the plus stuff and is continuing to develop that mentality of a real guy. It’s a nice little Sunday guy to have up your sleeve,” Florer said with a chuckle, “after our Friday and Saturday guys, who are doing an unbelievable job with their 87-88. Then all of a sudden, you’re able to bring in that 91-93. It changes things up.”

As Abbott continues to develop — and Saturday’s outing should go a long way toward building his confidence — Gill believes this team has a chance to compete for the West Coast Conference title and be remembered at LMU for years to come.

They also have a special Sunday starter, who had a perfect Saturday for the memory banks.