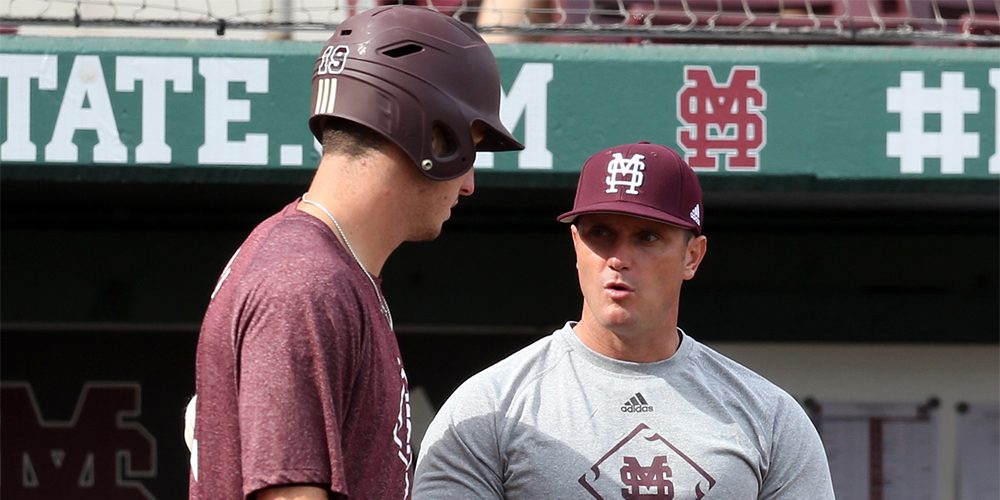 Andy Cannizaro is passing all the tests in his first season at MSU. (MSU photo)

As Cohen segued from his eight-year tenure as the Bulldogs head coach to a much more lucrative position in Starkville as the athletic director, he did his due diligence. He really did his homework on potential successors for the baseball program.

There was just one constant during this research process. Cannizaro. Cohen had a check list of attributes he wanted his head coach to possess. Former assistant Nick Mingione had already gone to Kentucky, and he wasn’t going to pluck the young head coach away from friend and UK athletic director Mitch Barnhart on short notice. He also wasn’t going to take long-time friend and pitching coach Butch Thompson form Auburn on such short notice. And on top of that, Thompson wanted to see the process through at AU, so chances were good he wasn’t going anywhere.

But Cannizaro? Cannizaro checked most of the boxes. He sought the opinions of many in the industry, including head coaches. Cannizaro’s name kept coming up, and the reviews were top notch. So, while the Bulldogs considered several candidates, Cohen zeroed in on Cannizaro, and got his guy near the end of fall workouts two years ago. The news actually broke while I was at LSU’s fall workouts, where Tigers skipper Paul Mainieri was blindsided by the sudden departure of his star assistant.

The move created shockwaves throughout college baseball, and certainly the SEC West with LSU suddenly looking for a replacement. Cannizaro was one of the hottest assistants in the sport after earning a strong reputation during his six-year stint as a scout in the Yankees organization, this after being a standout player at Tulane and making the big leagues. After helping an elite LSU lineup to new heights in his first season in Baton Rouge, he also guided the Tigers offense to a .290-plus batting average in his second season — just a year after losing a bulk of the offensive lineup. On top of his attributes as a coach, Cannizaro was considered to a stud recruiter and had a vibrant, infectious personality. Boy, was he going to recruit for the Bulldogs.

Mississippi State was known for Ron Polk, and then Cohen after him. Cannizaro was a stark contrast to those two from a personality standpoint. He was considered a transformative coach.

Cannizaro took Starkville by storm in his first season in charge. He bonded with the community, he considered State fans his family, he put together a strong first recruiting class, and he capped off his first season with a strong finish, reaching the NCAA super regional round and just a step away from the College World Series.

Just a year later, everything has come crashing down.