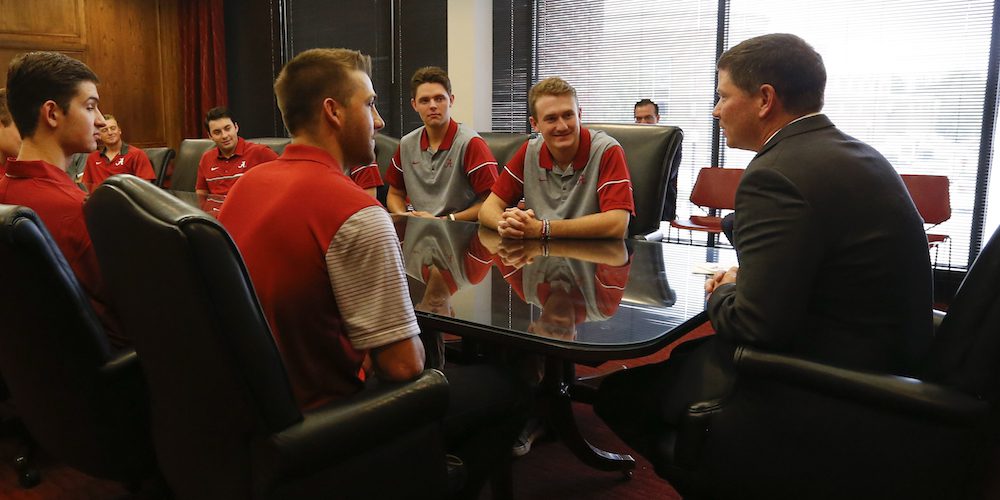 When you peruse the college baseball coaching carousel over the past two years, only one school is listed twice: Alabama.

The SEC experienced winds of change again this summer. Tennessee parted ways with Dave Serrano, which was a stark reminder how brutal life in the conference can be. Serrano, after all, made a pair of trips to the College World Series in head coaching stints at Cal State Fullerton and UC Irvine. Meanwhile, South Carolina split with Chad Holbrook and hired USF’s Mark Kingston. The most dramatic summer, though, belonged to Alabama, thanks to the uncomfortable split between the Tide and Goff, combined with the Crimson Tide choosing Auburn’s Brad Bohannon as the successor.

After dealing with instability the past few seasons, Alabama aims for a sense of normalcy as fall classes begin this week. The Tide enjoyed times with minimal drama during the Mitch Gaspard era, but the administration expected to be more of a national contender, thus the change. The Tide underwent a rigorous coaching search after splitting with Gaspard that ended with “no” answers from prospective candidates such as East Carolina’s Cliff Godwin, while others such as eventual Texas head coach David Pierce, who tripped to Tuscaloosa to check out the campus, were too far down the road in other searches to be in consideration again once the Godwin ship sailed. That brought on Goff, who did an impressive job at Campbell, while also making incredible and immediate strides at Louisiana Tech. But coaching at UA and the SEC was a massive step up, as Goff realized during his short time with the Tide. On the flip side, Bohannon knows the lay of the land in the SEC.

“Being the head coach at Alabama, the stage that it presents, was something that was quite a bit different for me, trying to prepare and such, to be honest. The speaking engagements and other things like that were a little different for me,” he said. “I was doing less of the coaching part of my job and much more of the public relations aspect of things. Being at the mid-major level, you spend most of your time actually coaching, whereas at UA I was more using my time to reach out to people and use my platform to try to do something positive for the program and for the state.”

The Goff system didn’t work at Alabama. After seeing what he had from a personnel standpoint in the spring with marks of 19-34 overall and 5-24 in the SEC, he wanted some swift changes player-wise and made that abundantly clear at the end of the season. Goff needed to make room for new and what was perceived to be better players. That didn’t sit well with some players, former players, administrators and Alabama fans. And that combined with other happenings around Sewell-Thomas Stadium spelled doom for the Goff era.

“Looking back, I think I could’ve done more research on the players and been able to relate to those guys a lot more. I needed to understand what those guys went through in the SEC and the pressures they have to live through each day,” he said. “I needed to look at the scale of things and have better relationships to understand that aspect of things on a daily basis.”

Goff is now at peace with the decision that caused a sudden detour in his coaching career. Goff is no longer the head coach at a school like Alabama that has a $40 plus million ballpark along with an athletic budget of $164 million (ranked fourth nationally). But he’s found happiness at an unlikely location: West Lafayette, Ind., where he’s hoping to help Mark Wasikowski and the Boilermakers take another step forward after surprising many with a .500 Big Ten record in 2017. He’s also had much more time to spend with his family, which hasn’t been easy to accomplish in the past with his head coaching duties. Goff admits he’d like to get back into the head coaching arena sooner rather than later. 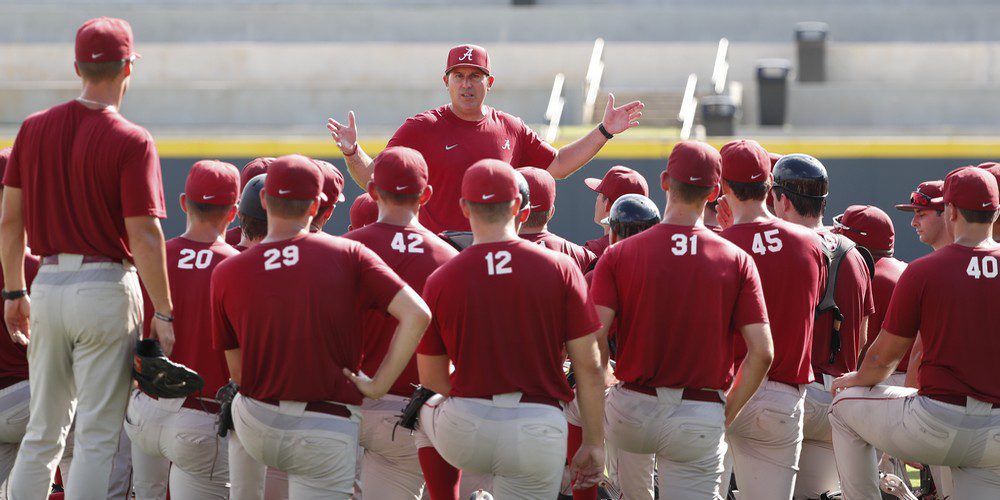 Things didn’t work out at Alabama for Greg Goff, but he has a new beginning.

“It has been fantastic. It’s been amazing. He’s got a great staff and they’re really good to work with,” Goff said. “The last three or four weeks, I’ve kind of come to a peace with the situation here. The administration, players and more have been great and I think this is going to be a lot of fun.

“I think the whole situation at Alabama was a real learning experience for me. It was certainly a humbling experience, too” he said. “I’m at peace here, and to be honest, I think Brad [Bohannon] is going to do a great job. He knows that area, he’s an excellent recruiter and I think he’s going to do well. Personally, I hope he wins there, and wins big.”

While Goff enjoys new scenery and a temporarily more laid-back approach at Purdue with the fall semester beginning this week, down at Alabama, Bohannon wants to establish some consistency and respect in the program starting with his first full team meeting this week.

“We’re having our first team meeting today, actually,” Bohannon said on Tuesday. “The first month here was kind of rough, I think. And I think the best way to put the situation right now is that the players are probably a little apprehensive. But, this is a group that has had three coaches in three years and we’re dealing with college-aged kids.

“I think the biggest thing that I’ve already noticed is that last year kind of brought these kids together. The kids really seem to like each other and the adversity didn’t seem to drive the team apart. That seems to be the case most of the time,” he continued. “We’ve got an older group with a large junior class. And generally speaking, I think we have some high character kids in this program.”

There have been some tumultuous moments for Bohannon over the past couple of months. New coaches typically get somewhat of a honeymoon period. But Bohannon and his coaching staff have hit the ground running. They didn’t have a choice. While Bohannon wouldn’t comment on the situation he inherited, we know that Alabama was expected to have a roster totaling 50 plus players this fall had the previous staff or Bohannon not made some cuts to the current roster or recruiting class.

Bohannon had to trim the roster to 37 players this summer, meaning that a decent amount of last year’s recruiting class had to go another route that didn’t end up in Tuscaloosa – at least for the time being.

“When I first got the job, the math just wasn’t working. The NCAA rules are pretty black and white for us – you have to be at 11.7 scholarships dispersed throughout 27 players,” he said. “We did everything we could within those rules to get our roster together this fall. We’re excited to get going and we’re going to get fall workouts with 37 players on our roster.”

Stability in the locker room should arrive in short order for the Tide. Bohannon built a stellar reputation as an assistant during previous stops at Kentucky and Auburn. He has embraced Alabama and spent time earlier this week welcoming incoming freshmen to campus. However, this might not be an easy transition in terms of wins and losses – that much was evident during Alabama’s search for a pitching coach and top assistant. Bohannon aimed for the stars and courted former Tennessee head coach Dave Serrano. However, Serrano opted to head to West Virginia for reasons including family and an ability to immediately win. WVU welcomes back several players from a team that reached the NCAA postseason this past spring. Alabama? There’s some talent there with the return of Cobie Vance, Chandler Taylor and Jake Walters, but major question marks remain and a fragile culture must be strengthened. 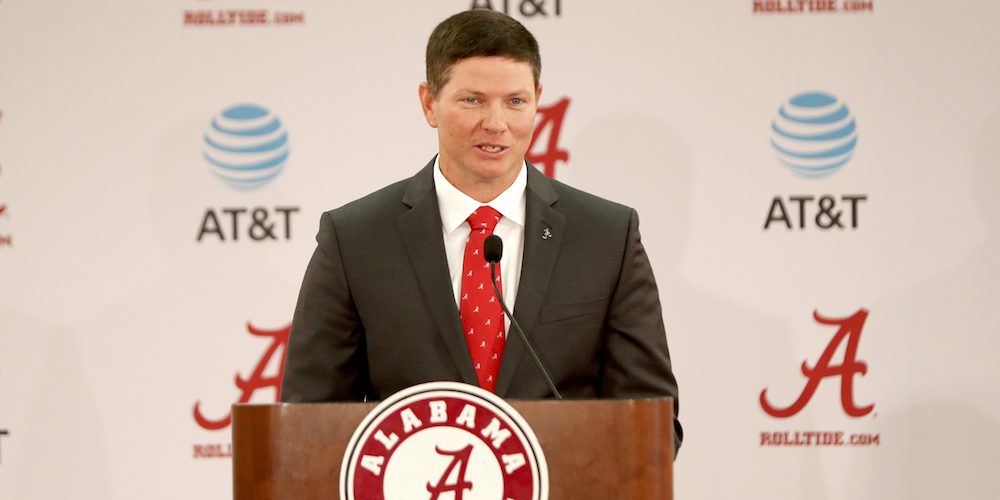 “I think having a sense of togetherness is important for any coaching staff to have with the players. You’re not just trying to help these guys grow individually, you’re trying to help them grow into a team. That’s certainly been our emphasis,” Bohannon said. “We need to be in the right place from a cultural standpoint around here. It’s not fair to be talking about Omaha, championships and things like that this fall. We’re trying to build a team culture. We’re not going to worry about wins and losses and things like that until the actual games start.”

This hasn’t been the smoothest transition for Bohannon, especially given that it’s his first head job. And he knows that some growing pains might be on the horizon, but he looks forward to the short and long-term future with the Tide. Bohannon said the administration, including athletic director Greg Byrne, realize the challenges ahead, but added that he’s ready to make swift progress and has been pleased with the Tide’s traction on the recruiting trail.

Gaining traction in the SEC can be a daunting task in a normal situation. Alabama is trying to do it on its third coach in three years. Hard job ahead? Sure. Impossible? No. But stability first is the key and barring a surprise, Bohannon will achieve that. Goff will find that at Purdue, too.