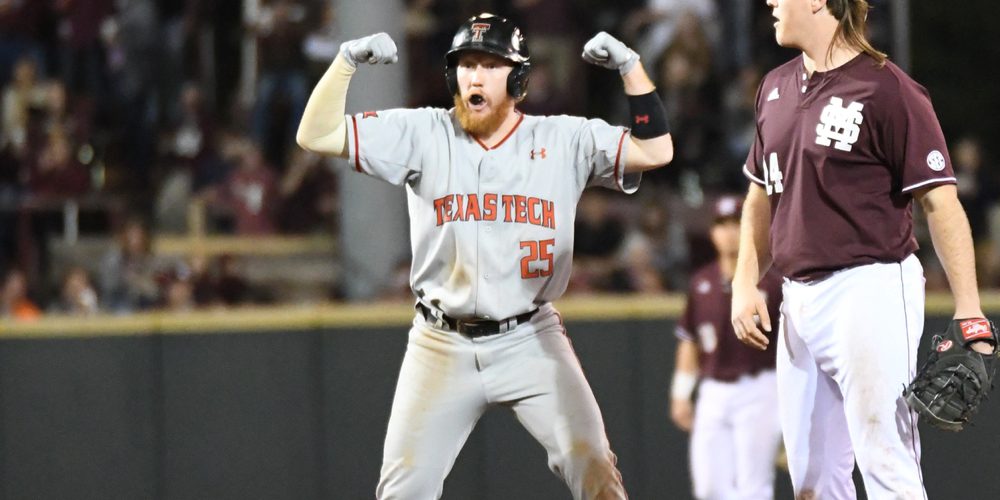 Raiders Come Out With Guns Up

STARKVILLE, Miss. — Tim Tadlock is the very personification of the phrase “even keeled.” He doesn’t get too high or too low after game 25 or game 50; he’s certainly not going to overreact one way or the other after the first day of the season. But sometimes first impressions can be telling, and Texas Tech’s 2017 debut felt a lot like the final impression it left in 2016: that of a bona fide Omaha-caliber team.

The Red Raiders simply steamrolled Western Illinois in a 15-1 rout in their season opener Friday afternoon, and then they bounced right back and knocked off host Mississippi State 5-2 in front of 10,217 fans — the largest opening day crowd in Dudy Noble Field history.

Over the course of those two games, the Raiders got two very strong starts from the pair of horses atop their rotation, Davis Martin and Steven Gingery. They showed off enviable firepower in the bullpen, rolling out four big-time power arms in the two games and overcoming some control issues thanks to clutch strikeouts. They played outstanding defense, particularly on the left side of the infield, where shortstop Orlando Garcia made difficult plays look routine over and over again while freshman Josh Jung shined at the hot corner. Their offense grinded out competitive at-bats (particularly in the opener) and showcased game-changing power. And they maintained their poise when Mississippi State mounted a couple of late-inning rallies to ignite the crowd.

When it was over, they allowed themselves to feel some satisfaction after an excellent start to the season. But not too much satisfaction.

“We’d like to be on cloud nine for a little bit today, and then tomorrow’s a new day,” said TTU first baseman Hunter Hargrove. “I think the dugout was really excited and happy that we got our first two out of the way, and I think we’re going to continue to keep rolling.”

Hargove, the senior cleanup man, was a human wrecking ball in both games, finishing the day a combined 6-for-9 with three doubles, a homer, four RBIs and a walk.