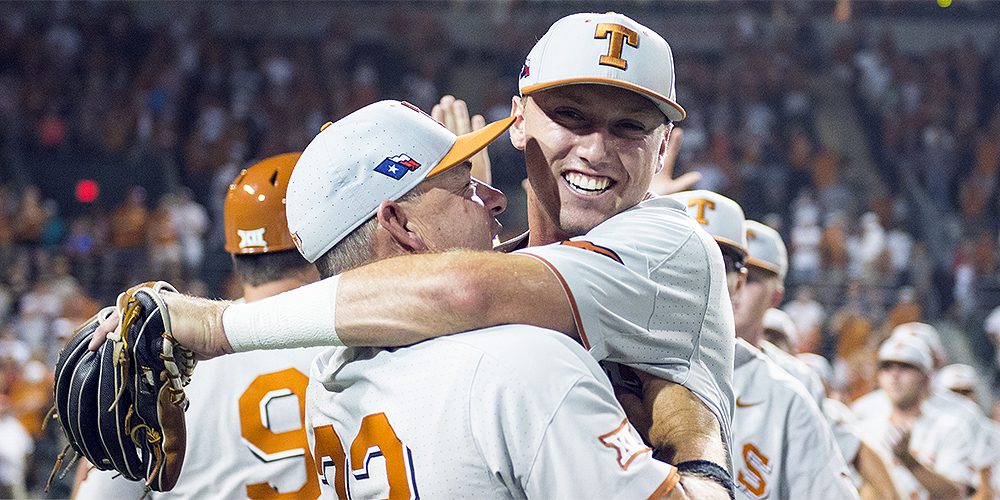 AUSTIN, Texas — As hard-hitting Kody Clemens, starting pitcher Blair Henley and regional hero and do-it-all pitcher Chase Shugart sat to David Pierce’s left in the postgame press conference after his team beat Indiana to advance to the super regional round for the first time since 2014, Pierce answered questions about his team, and then was asked what the trip to the super regional round meant to him from a personal standpoint.

Pierce, as he often does, deflected credit to everyone from players to fellow coaches, and even to the support staff. He wasn’t going to make the moment about him. But it was special for him, that much was true via his words and body language.

You see, as a head coach, when you don’t accomplish one of your primary goals as a skipper for a few seasons, doubt starts to creep into your mind. And as that occurrence multiplies, that doubt grows stronger and stronger.

Pierce, before tonight, had appeared in NCAA tournaments in all seven of his seasons as a head coach. But something important was missing from that resume — a super regional berth.

Last year, the Longhorns close to advancing to a super regional, sitting in the driver’s seat in the Long Beach Regional after winning the first two games. However, the Dirtbags double dipped the ‘Horns to advance. Texas started summer earlier than expected, and it was back to the drawing board  for Pierce and his coaching staff.

That distant feeling ended Sunday night, as the Longhorns used a little luck, some clutch pitching and more heroic performances to beat the Hoosiers 3-2 to advance to play the winner of the Oxford Regional in next week’s super regional round.

“It’s special for everybody in the organization. We have so many great people that work for us and that work with us. I’m really excited for our coaching staff, they’ve been with me now for seven years. To have their expertise and energy and passion carry over to this team and this team feed off of it, it’s a great combination right now,” Pierce said. “You look at being 9-9 coming out of Arkansas, this team was just going to make sure they denied any type of losing season. We then go off and win the Big 12 and then fight through and win the regionals. So, now, we get another opportunity to continue playing with this team.”