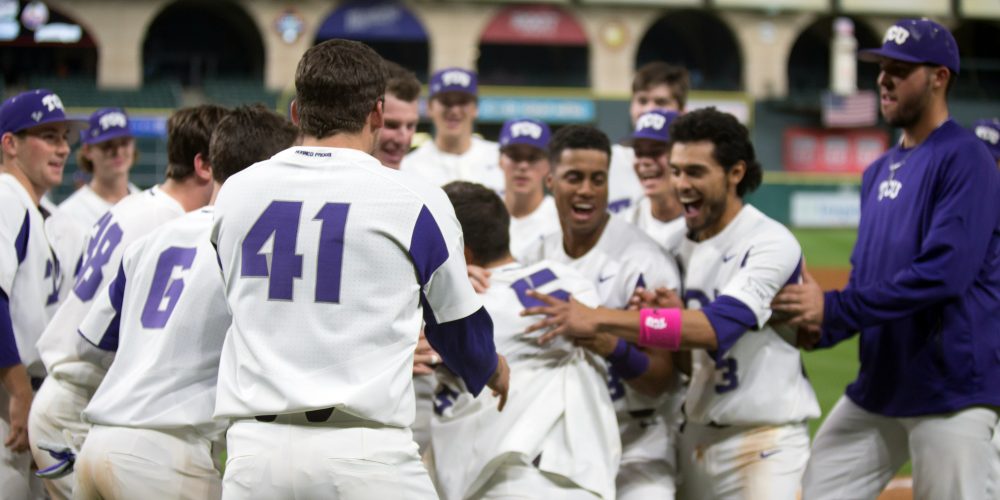 TCU beat Texas A&M in a 15-inning affair in Houston.

HOUSTON — You could make a mini-series about the craziness between TCU and Texas A&M over the years, but you might not want to do that just yet as there are likely still more potential episodes to come.

The latest saga in this newfound and unexpected rivalry occurred into the wee hours of Sunday morning, and once again, involved TCU coming out on the winning end of things, 11-10 in 15 innings. But it’s what led to that moment that had many of us in Minute Maid Park somewhat befuddled, and TCU coach Jim Schlossnagle shaking his head in amazement.

“What do you say between the games we’ve had with those guys over the course of time,” Schlossnagle said. “What’s awesome about it, is the fans on both sides get at each other, but there’s a lot of respect between the coaches and players from each program, and I’m sure we’ll probably see them again at some point this season.

For much of the game, it looked like we might avoid high-intensity drama for once between the two teams. The Aggies came out of the gate sizzling hot in the first inning, scoring five runs off TCU prized freshman lefthander Nick Lodolo. The Aggies had a mature approach against the lefty, he didn’t command pitches well and the Frogs’ defense didn’t help matters.

Lodolo, who shined last weekend against Arizona State after a rocky first inning, didn’t get out of the second after he was drilled with a line drive from A&M two-hole hitter Logan Foster.

A&M withstood a few potential TCU rallies the rest of the way, and while it only led 8-5 entering the ninth inning, it seemed like the Aggies put the finishing touches on a potential victory when freshman catcher Hunter Coleman sent a two-RBI double down the right-field line to make it 10-5.

Little did we know that was only the beginning to what was a wild night turned morning.

Everyone wanted to see Texas A&M junior righthander Corbin Martin this weekend. The hard-throwing righty entered the season with high acclaim. And while he started the year on a negative note with inconsistent outings, he’s still a guy that, when clicking on all cylinders, has plus stuff as he showed at the Cape Cod League last summer.

He put some of that on display Saturday night. A&M starting pitcher and righthander Stephen Kolek was lifted after allowing a run on four innings, while freshman lefty Jason Doxakis threw 2.2 innings to get the Aggies into the seventh.

A&M coach Rob Childress then turned the game over to Martin, whom the Aggies would love to see become a John Stilson type of long reliever. It wasn’t the most pinpoint command at times, but Martin got the job done and showed bursts of electricity. He inherited a runner on base with two outs and blew away Cam Warner on a 96 mph fastball to get out of the frame.

In the eighth, he had a 1-2-3 inning with a pair of strikeouts to one and two-hole hitters Austen Wade and Elliott Barzilli, respectively. Martin struck out Wade on a 93 mph fastball and showed feel for a mid-80s changeup and a sometimes filthy 84-86 mph slider. 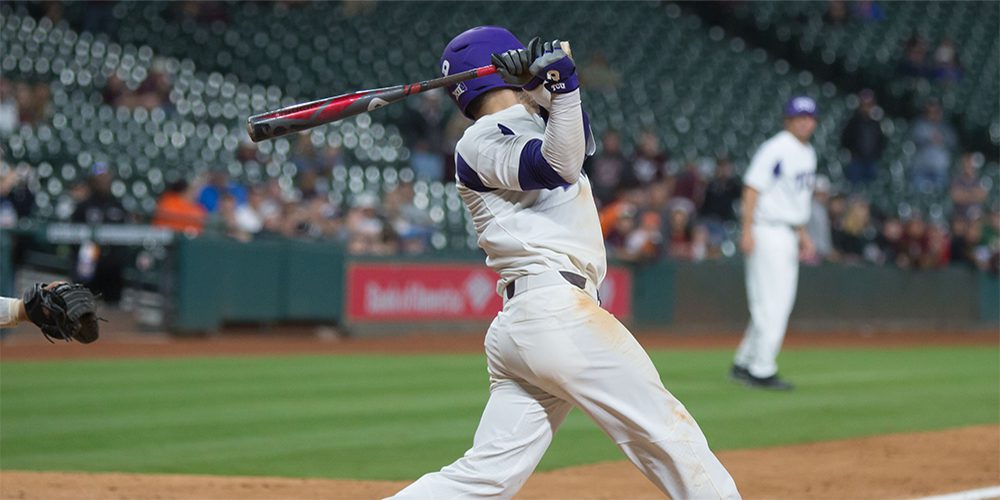 Ryan Merrill got the game-winning hit against A&M. (TCU)

In college baseball, it’s often smart to ride the hot hand to victory on the mound, but given how early it is in the season, Childress wanted to see how righty Cason Sherrod would fair in the ninth inning with a commanding, or so it seemed, five-run cushion.

“I would say certainly so [on Martin having more in the tank]. There’s no doubt he had more. We probably should have left him in the game,” Childress said. “But we had already told him to decompress and we had extended the lead in the top of the ninth with two outs. He had decompressed mentally and we wanted to get Sherrod in the game. You could always second guess yourself as a coach.”

That decision proved costly. Sherrod walked Evan Skoug on three pitches and proceeded to walk Luken Baker and Josh Watson to load the bases with no outs and a five-run lead. A&M yanked Sherrod out of the game, and the rest of the bullpen failed to take care of business, while some sloppy play in the field also aided the Frogs’ magical comeback.

A&M’s pitching staff totaled five walks in the inning and TCU tied the game on an infield single by Elliott Barzilli that included an error by A&M third baseman George Janca, setting the stage for another wild extra-inning affair.

It might only be early March, but it’s never too early for some legendary performances.

After TCU’s Lodolo was lifted from the game in the early innings, the Frogs knew they’d need some Herculean performances out of the bullpen.

Freshman righthander Trey Morris battled in 2.1 innings of work, while the best performance came from 6-foot-1, 190-pound, sophomore righthander Sean Wymer. Wymer entered the game and made an emphatic first impression by striking out the side. He also recorded two more strikeouts in the 11th and struck out the side in the 12th. Wymer, whom the TCU coaching staff was excited about exciting fall workouts, sat 91-93 with his fastball and showed excellent feel for his curveball.

He struck out nine Aggies, didn’t walk anyone and didn’t allow a hit in five innings, finally turning the game over to hard-throwing righty Durbin Feltman in the 15th.

“He’s kind of been a pick to click for us. Kirk [Saarloos] did a great job with him in the fall. His breaking ball is better, and while we’ve actually seen that in a setup role, we actually talked about sending him to the Cape or something to be a starter for us,” Schlossnagle said. “Sometimes things happen during the season that you aren’t expecting. Wymer was great.”

Wymer capped off a wild night for the TCU pitching staff. While Lodolo obviously was as a negative, they tallied a career-high 26 strikeouts against the Aggies.

The Aggies also had their own stellar bullpen performance. Crafty lefty Kaylor Chafin entered the game with two outs in the ninth inning and struck out Ryan Merrill to end the frame with a pair of runners on base and go to extras. He, like Wymer, was brilliant in extras, using a bevy of offspeed stuff to keep the Horned Frogs off balance. He struck out seven and walked two and the game-winning run on a Ryan Merrill double into the right-center gap was charged to him after he was lifted following a single and a sacrifice bunt.

The Aggies like Martin and Sherrod on the back-end of the bullpen, but Chafin also deserves more consideration for a marquee bullpen role, too.

“I think what he did tonight puts him in the mix to be an important part of our staff,” Childress said. “He’s been pretty special for us the entire year.”

While the Aggies would’ve liked to get the TCU monkey off its back, Saturday’s contest, which lasted 5 hours, 40 minutes, was yet another chapter added to an always-evolving rivalry.

It was one to remember, even if it was just early March. And both the Aggies and Horned Frogs look like teams that could meet again down the road. Perhaps even in Omaha.