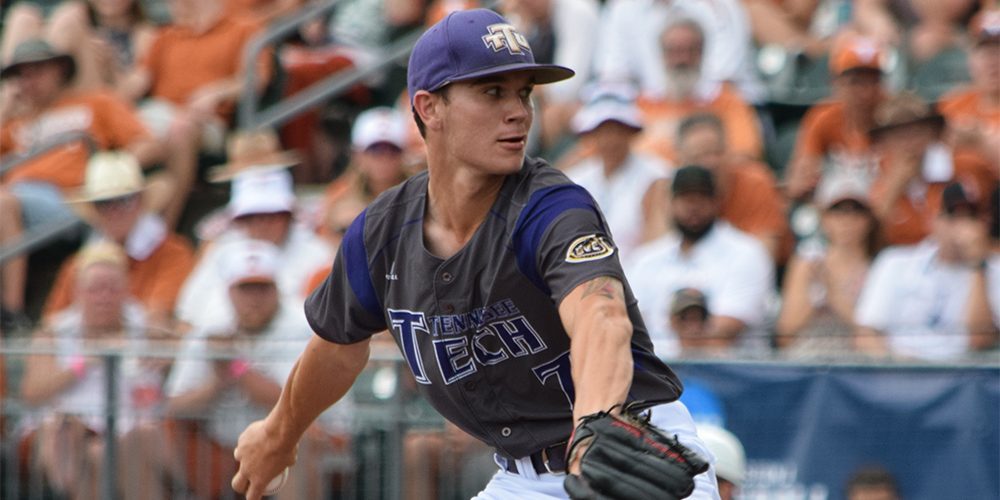 Last week against Ole Miss with Tennessee Tech’s season on the line, Roberts came out of the bullpen early in the regional before starting the first of two championship meetings with the Rebels. In the final appearance against Ole Miss, Roberts allowed four runs on six hits in 7.2 innings. Not an overwhelming stat line, but he helped preserve enough pitching so the Golden Eagles could double dip the Rebels to advance to the super regional round.

Roberts, the 5-foot-11, 170-pounder, as he has been called upon to do so many times this season, inherited a big and pressure-packed situation Saturday afternoon against Texas. Tech starting pitcher Marcus Evey worked five innings, but ran into some serious trouble in the sixth inning by walking Kody Clemens and Zach Zubia to begin the frame. The 7,000-plus spectators in attendance were on their feet, hoping to find some sort of way to rattle Roberts as he trotted in from the bullpen and took the mound.

Not Ethan Roberts, though. He’s different than most on this stage.

Roberts dug deep and struck out the side in impressive fashion, striking out Masen Hibbeler on a 2-2 count, Ryan Reynolds on a 1-2 count and finishing it all off with a punch out of DJ Petrinsky on a full count. He galloped off the field and put together one of the best outings of his incredible season in a 5-4 win over Texas — a win that has Tennessee Tech a victory away from advancing to the College World Series for the first time in school history.

“Man, this guy is a stud. I love watching him go to work out there. It’s so nice and comforting as a coach to know you’ve got a guy in the bullpen you can put in when there’s a competitive moment in the game,” Tennessee Tech coach Matt Bragga said. “Runners on first and second, one or two-run lead, we’re going to go to our guy Robby.

“He’s just so comforting and composed,” Bragga continued. “He has incredible composure and he has command of every pitch he can throw, while also doing it at a high spin rate. He has good stuff.”

While Roberts protected that 5-3 lead in the sixth inning, it wasn’t the last time he’d have to dig deep the rest of the way. The Longhorns manufactured a run in the seventh inning on a sacrifice fly with one-out by David Hamilton, but that was all they could get. Then, in the eighth, Roberts walked Clemens to lead off the frame. But again, the righty showed the way he embraces big moments by getting a pair of fly outs before striking out Reynolds to end the frame. Roberts went 1-2-3 in the ninth inning to close out the Longhorns. Stuff-wise, the gritty righty sat in the 90-92 mph range with a cutting fastball, while also showing a slider at 79-80 and a mid-70s curveball.