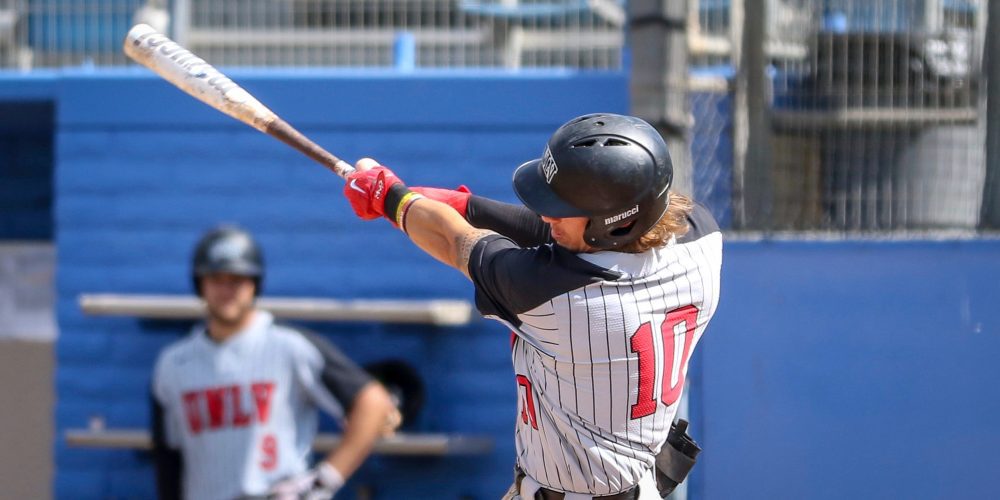 UNLV’s Stott Back In Business At Right Time

Rebels head coach Stan Stolte was giving several regulars a day off during a midweek matchup at UC Riverside. He started five freshmen. Stolte wanted to give the young players an opportunity to showcase themselves before UNLV heads into May and has to battle for a spot in the Mountain West Tournament.

But one name was going to be in the lineup regardless: Stott. The Rebels’ top hitter and potential first round draft pick has too hot a bat right now not to have him leading the way at the top of the lineup. Stott has hit safely in 16 of his last 17 games, hitting .463, 5, 21 over the span to push his numbers back up to their anticipated levels. Even if wasn’t playing shortstop, Stott’s name was still going to be leading the lineup card on Tuesday.

Stott started the season strong. He had 13 extra-base hits and 13 RBIs in the first 18 games. His slash line was terrific: .379/.554/.758, but Stott was striking out more than usual. He had 15 strikeouts in 66 at-bats, one every 4.4 at-bats. A number that was nowhere close to his career mark of 11.1 at-bats per strikeout. His sophomore season he was one of the nation’s 20 toughest hitters to strike out, going down on strikes only once every 14 at-bats.

Soon Stott fell into a slump. He hit .186 with only two extra-base hits and one RBI over an 11-game span. His season on-base percentage dropped nearly 100 points. His slugging percentage saw a 200-point dip.

“He got a little long with his swing and then he went through probably three or four weeks of just trying to tone it down a little bit and find himself again, but that’s baseball,” Stolte said. “You’re not going to play 56 straight games of being outstanding.”