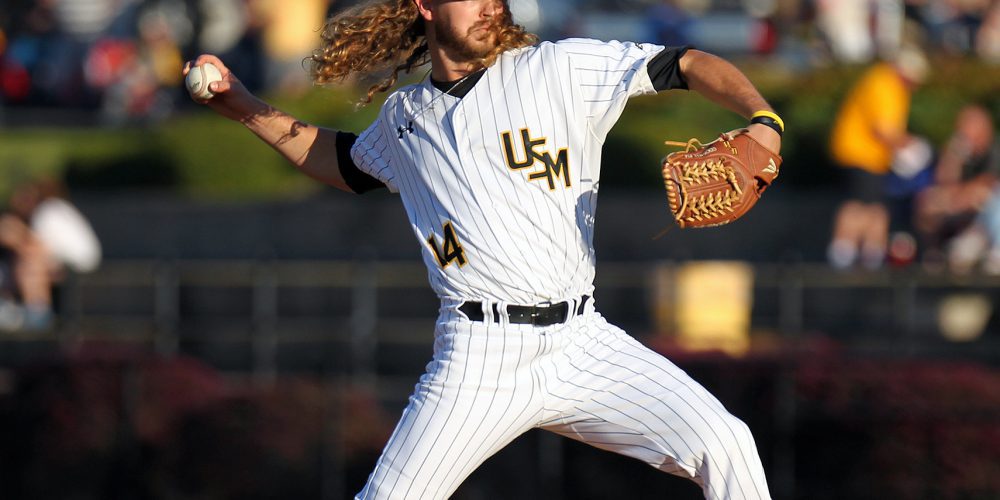 Cord Cockrell has had a strong season for the Golden Eagles. (USM)

But Southern Mississippi, historically known for its potent offenses, had an effective righty of its own in senior righthander Cord Cockrell, his wavy hair and all, who kept sizzling hot Rice at bay, while the bullpen was able to take care of business the rest of the way in a 2-1 victory, a win that puts the Golden Eagles in sole possession of first place in Conference USA.

“We got a win and I just wanted to do everything I could to help the team win tonight,” a stoic, but laid back Cockrell said. “It always helps when you get spotted with an early lead, and that cushion allows you to not have to be so be perfect.”

From the get-go in this one, it looked like it was going to be USM’s night. Duplantier’s command wasn’t the best in the first inning, and the Golden Eagles were able to fight off his fastball with Jack Sandlin hitting a double on a 92 mph fastball down the left field line, while hard-hitting Golden Eagles veteran Tim Lynch brought home the game’s first run on another hard-hit fastball down the left-field line. USM carried the momentum from that point on, adding another run in the fourth inning.