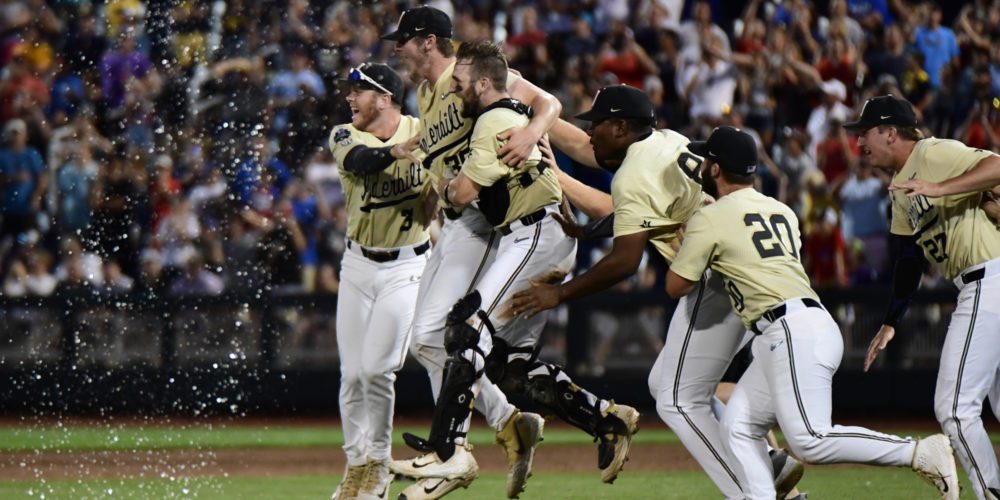 That’s what they were chanting when Eder delivered the final pitch of the 2019 College World Series, which Thomas hit to center field for a flyball out, securing an 8-2 win for Vandy and a national championship. Vanderbilt’s players dogpiled around Eder near the pitcher’s mound, and they exchanged hugs.

At some point during the celebration, many of them surely thought about Donny Everett — especially seniors Ethan Paul, Stephen Scott, Julian Infante, Patrick Raby and Walker Grisanti plus fourth-year juniors Kiambu Fentress and AJ Franklin, who arrived in Nashville as part of Everett’s class in the fall of 2015. Those seven players endured unimaginable heartbreak when Everett tragically drowned on the eve of the 2016 NCAA tournament. In the wake of that devastation, Everett’s parents Teddy and Susan became part of the very fabric of Vanderbilt baseball, as the coaches and players welcomed them into their inner circle, and they all gradually embarked upon the long, painful healing process together.

As Vanderbilt celebrated on the dais erected near home plate Wednesday night, Teddy and Susan joined the team on the stage and exchanged tearful hugs with coach Tim Corbin and players.

“You know, those two mean so much to this program and all the players and the seniors,” Paul said. “I mean, to this day every time I look at Teddy I think of Donny, and just being able to share that moment with them was something that — I think I can speak for the seniors, but probably the whole team — is something that we’ve all really wanted to do. This team is so special for so many reasons, but we’re all genuinely — we all care about each other, and they’re just as much a part of the team as we all are.”

Moments after that celebration on the stage, Susan Everett spoke through tears of joy about what it all meant to her.

“I don’t know how to describe it. It’s just so wonderful. These boys played their hearts out,” she said. “I just want it to be their moment. They worked so hard for this.”

It was the players’ moment, and it was the Everetts’ moment, and it was the coaching staff’s moment. They were all in this thing together. It took a long time to pick up the pieces and move forward from the devastation of Everett’s death — not only as individuals, but as a program. Corbin confided Wednesday night that he had even told his wife Maggie that he wasn’t sure if he would be able to get the program back, because the soul of that program had sustained such a deep, lasting wound.

The healing process happened naturally, in fits and starts. A cloud hung over the program in the fall of 2016, and it lingered through half of 2017. An emotional ceremony retiring Everett’s No. 41 jersey in mid-April that year provided some catharsis, and so did winning a regional at Clemson that year. Vanderbilt wound up losing in super regionals, and it was beaten at home in another super regional in 2018. Vandy still wasn’t back to where it had been — at the pinnacle of the college baseball world — but it was getting closer.

Now, Everett’s remaining classmates will go out as champions. And the program survived the darkest days, and emerged on the other side even stronger. 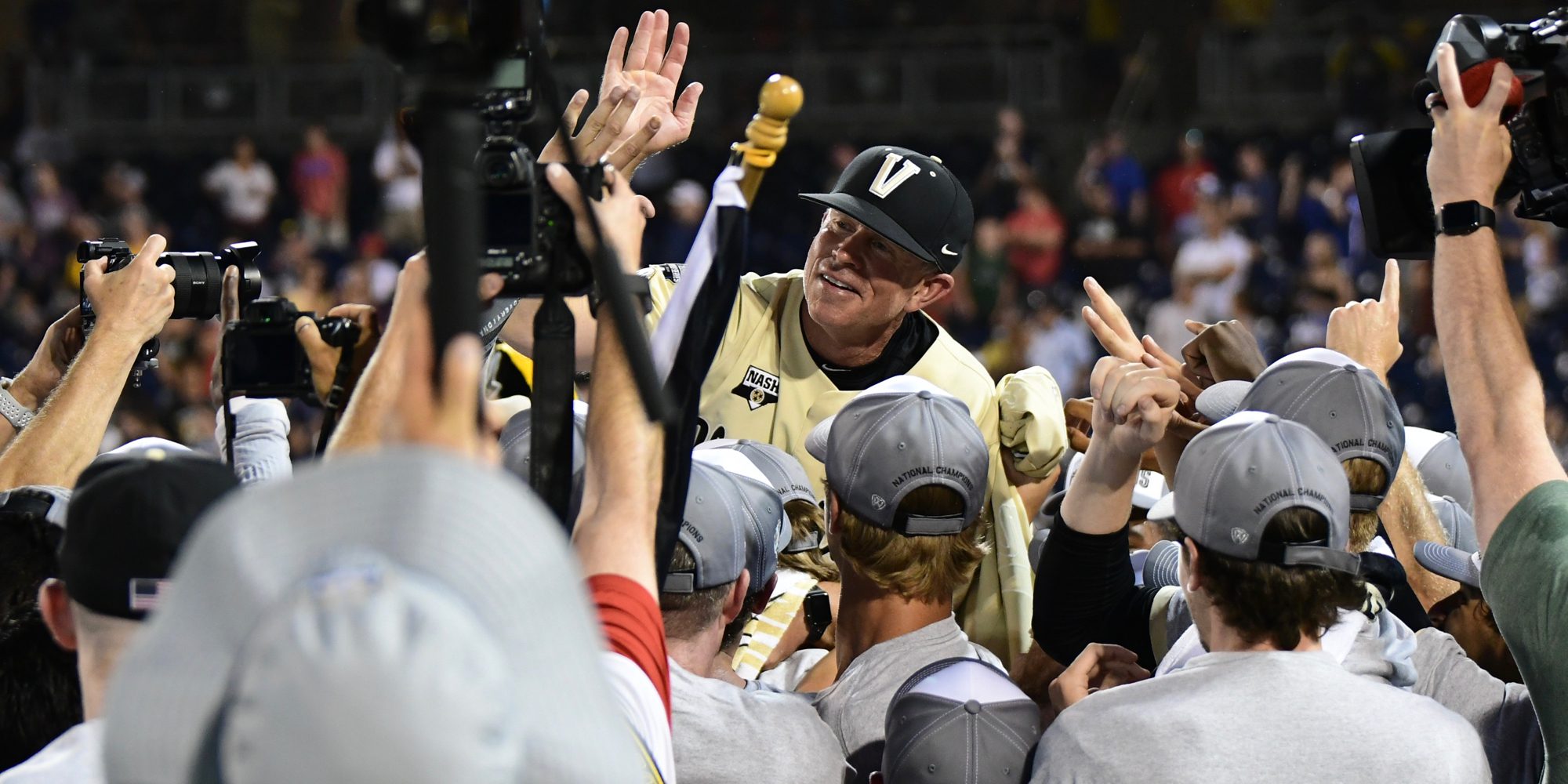 Vanderbilt players lifted Tim Corbin onto their shoulders, and he wildly exchanged high-fives with as many hands as he could find (Aaron Fitt)

“You don’t always get what you want in life, and to watch this situation come full circle for them is particularly gratifying,” Corbin said. “They experienced devastation at the lowest level as an 18-year-old losing a friend, and suffer through that heartbreak for a long period of time. They played with heavy hearts for a long period of time, and the program didn’t feel right for a time. Rightly so.

“But the fact that they could navigate their way towards their senior year, graduate, stay together, make decisions to come back, and then, as Ethan said — I think his point was straight on — we just — we kind of stayed in our lane the entire year and just tried to do small things well. And as time went on, we never talked about championships, we didn’t talk about winning the SEC, we didn’t talk about winning a regional, we just stayed very localized in their thinking, and I attribute that to the older kids. That situation callused their brain, and because they did that, it allowed them to get closer to maturity than maybe if that didn’t happen.

“I hate to say there’s any positive thing from losing a young person, but certainly there’s experiences that you gain from that that allow you to grow individually and as a group, and we did that.”

Certainly Vanderbilt’s growth on the mound played a critical role in this outcome. Nobody ever questioned the raw talent of Vandy’s pitching staff, which was loaded with more power arms than any staff in the country. But early in the year — and at times throughout the season — those talented flame-throwers struggled to consistently command the zone. Pitching coach Scott Brown did an exceptional job nurturing those talented arms and bringing along their command as the season progressed, but Vanderbilt’s elite offense helped facilitate that growth.

“We’ve had a couple hiccups here that may have cost us some ballgames, as we’re figuring some things out a little bit earlier in the year, but our offense has been outstanding. Our offense has afforded us throughout the year to get guys into roles that they could really grow into without the pressure of, you know, this is a huge, huge pitch,” Brown said. “Our offense has bailed us out a couple times in that, but this team has found ways to win throughout the year in a variety of ways.”

For most of the College World Series, the bats were relatively cool, by Vanderbilt standards — but the arms picked up the slack. In particular, the starting pitching came up huge in Omaha, leading this team to the national title. Ace Drake Fellows set the tone with seven innings of one-run ball in Vandy’s CWS opener, and then Kumar Rocker and Mason Hickman combined to allow just three runs total in 24.1 innings over four starts. Rocker cemented his CWS Most Outstanding Player award with another season-saving performance Tuesday, and Hickman held Michigan to just a run on four hits in six innings Wednesday, earning the win in the championship clincher.

But the offense came alive in that final game on Wednesday, working eight walks and producing nine hits. The discipline of the offense proved crucially important, as free passes sparked a three-run third inning and a two-run fourth, allowing Vanderbilt to take control of the game. Hickman and lefty Jake Eder (3 IP, 2 H, 1 ER) took it from there.

“It was kind of a slow start to the tournament [for the offense], but we were playing good offense,” said Vanderbilt outfielder Pat DeMarco, who hit a game-tying solo homer early, scored two runs and drove in two more. “It was just we weren’t getting that big hit, and tonight most of the damage was done with two outs, and we were just getting that big hit, and we were stringing good offense together as a team. It was team offense tonight.”

That seems like an appropriate summation, because from the first day of fall practice until Wednesday night in Omaha, Vanderbilt was a true team, with players that always believed in each other and never let their focus flicker. And with a 59-12 overall record, an SEC regular-season and tournament championship, and now a national title, this Vanderbilt unit has ensured that it will go down as one of the greatest teams of the 21st century.

How’s that for a finish for Donny Everett’s class, and the three classes that followed, helping to bring Vanderbilt baseball back to the top of the college baseball world?

“I’m just happy for our team. I’m happy for the boys,” Corbin said. “It’s fun to watch this thing come full circle for them.”