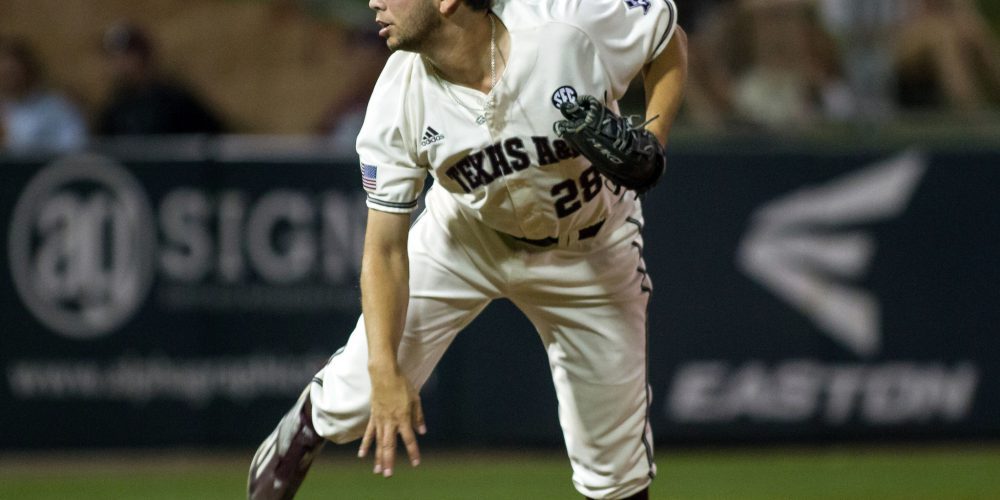 COLLEGE STATION, Texas — Elite teams find different ways to win games, and No. 2 Texas A&M showed you a prime example of that Thursday night in a 1-0 win over No. 8 Vanderbilt. While the Commodores were riding the arm of power-armed righthander Jordan Sheffield into the contest, the Aggies countered with another sophomore righty in Turner Larkins, who has a power arm, but who was making his first start of the season.

Sheffield carrying a 24-inning scoreless streak into the game and Larkins in a new-look role. Surely that swung the pendulum greatly in Vanderbilt’s direction, right? Wrong. Larkins gave the Aggies 3.1 quality innings, and as we noted in our preseason content about Rob Childress’ club, A&M displayed the type of premium bullpen depth that only a team such as Florida, so far this season, has put on display.

The Aggies looked to be in precarious situation when righthander Brigham Hill was kept on his normal rotation schedule because of last week’s Friday rainout at Arkansas. But it all worked out because of a full team effort, all despite the brilliance of Sheffield.

“I thought [Larkins] was outstanding and exactly what we needed. Our other guys were short-rested two days, we needed someone else to step up and [Larkins] has been good for us the last few weeks,” Childress said. “He certainly made me look smart tonight with his performance and each guy behind him had to come into trouble and they made pitches when they mattered most.”

Larkins, though, set the tone in this one. With the odds stacked against him and toting a 7.71 ERA in Southeastern Conference play, the 6-foot-3, 200-pounder, didn’t disappoint. He began the start on a positive note, recording two strikeouts in the first inning, while touching 94 on the radar gun. The loudest statement he made in the first was a strikeout of Vandy outfielder Jeren Kendall on an 85 mph changeup in a 1-2-3 inning. He didn’t run into serious trouble until the fourth when the Aggies put the bullpen duo of Andrew Vinson and Mark Ecker into motion.

Larkins showed flashes of why he could be a big-time prospect to watch for the 2017 draft. He sat 92-93 with his fastball, bumped a few 94s here and there, and displayed a quality mid-80s changeup. He also showed sharpness with his 79-81 curveball at times, though it wasn’t an overbearing offering.

While Larkins did what he needed to do, the return of Vison and rise of Ecker is a bigger reason for this win and the Aggies possessing legitimate national title aspirations. Vinson was injured earlier this season, and with the sudden decline of righthander Ryan Hendrix, his role has been magnified. He hasn’t disappointed, showing a strong upper 70s breaking ball, striking out three and allowing just three hits in three shutout innings. Meanwhile, Ecker created some serious buzz with the 25-30 scouts on hand, and his stock could soon climb if he continues to show premium stuff. Ecker struck out three and didn’t allow a hit in 2.2 innings to close out the contest. His fastball, which has touched 96 at times this season, was consistently 93-94 and up to 95, while the evolution of his changeup has been a huge feather in his cap so far this season.

“I think confidence is a funny thing. When you have it nobody talks about it, and when you lose it, you can’t find it, and they do,” Childress said. “He’s been dominant against lefties and righties, and his changeup is a big key. It really makes hitters stay off of his fastball.”

Now, thanks to the trio of Larkins, Vinson and Ecker, the Aggies have a series lead, and showed they can win a variety of ways.

Those performances didn’t diminish that of Vandy’s Sheffield.

We are watching Sheffield, a draft-eligible sophomore, develop into a premier pitcher and potential high first-round pick before our eyes.

As a redshirt freshman last season, there’s no doubt Sheffield showed flashes of brilliance. Against Arkansas, a game I covered last year, Sheffield was simply unreal, sitting 95-98 with his fastball, showcasing a plus curveball throughout and dumping in a steady diet of terrific changeups. But, those outings weren’t the norm. At many points last season and earlier this year, Sheffield had command issues with his secondary stuff and fastball, and that, as you might expect, led to some growing pains. However, the fast-rising prospect has matured a great deal as this season has progressed, and with that has come the further development of his stuff, which has already been there.

“He has phenomenal stuff, and he’s an unbelievable pitcher,” Texas A&M first baseman Hunter Melton said. “He can really throw his changeup for strikes in hitter’s counts, and he had that curveball working, too. He’s a pitcher, and he really knows how to pitch. He really got me on those three changeups [during an at bat]. He really had that going on all night.” 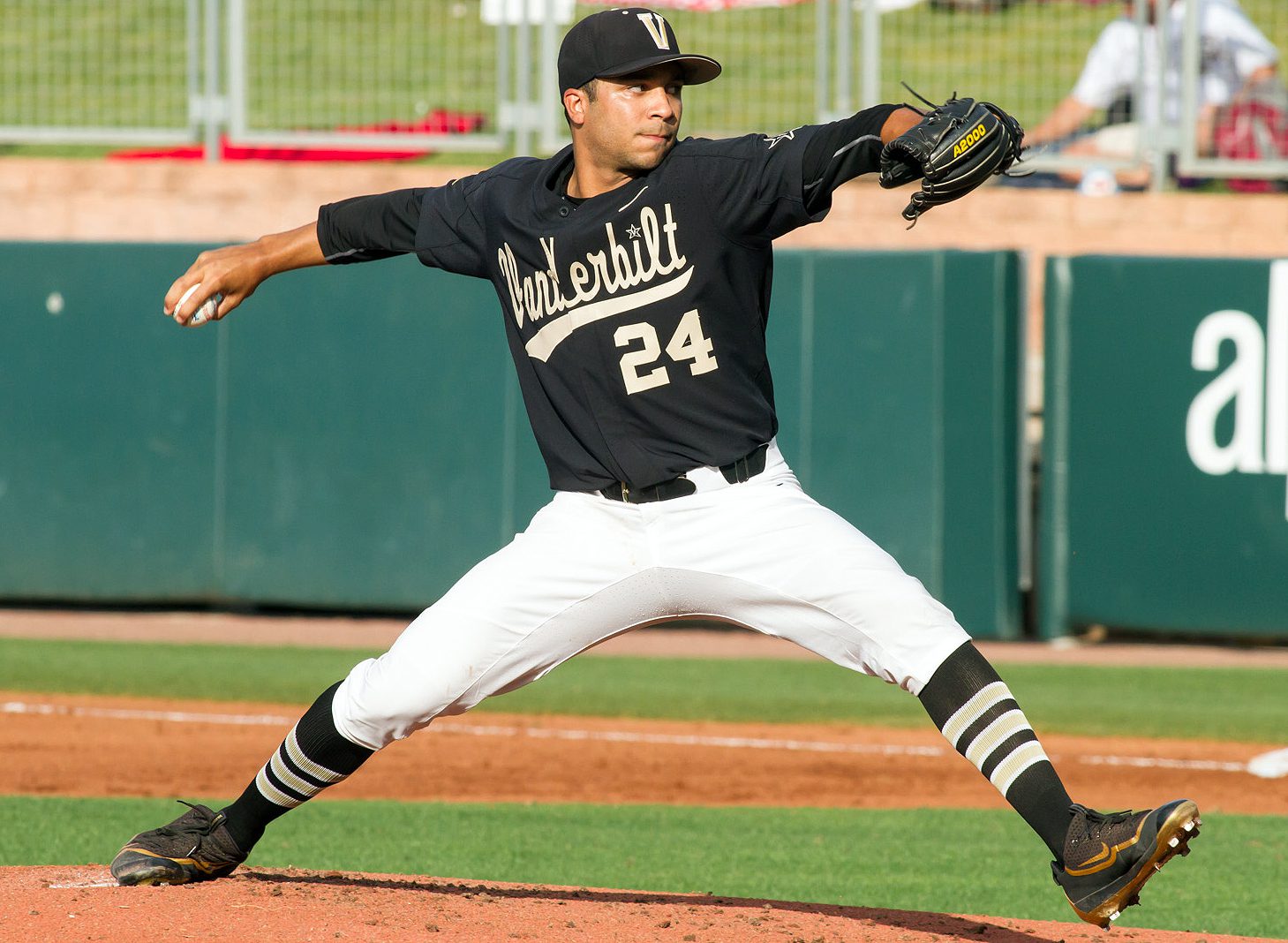 The most crucial point in tonight’s start from Sheffield was the first inning. After an error and an RBI single from Melton, the Vandy righty allowed a single by Ryne Birk and hit Michael Barash to load the bases. Suddenly, he was in quite the tough spot. Well, Sheffield got out of the jam by inducing a fly out to left field.

Sheffield was amazing the rest of the night, keeping one of the nation’s best offenses off balance throughout the night, and retiring 11-straight hitters from early on and through the middle innings until Boomer White’s double with one out in the sixth inning.

“I thought he was really good. He gave us a chance to win, and against a mature offensive team like that, they are tough to put down,” Vanderbilt coach Tim Corbin said. “He had an opportunity to blow out in the first and he held it together and attacked very, very good from that point on. He gave us a chance with the exception of one slip up.

“I think he has the fibers to be able to do those things [get out of big jams],” Corbin continued. “I think the big thing for Jordan is that he really paid attention to some of the pitchers from last year’s team and watched what they were doing. Carson Fulmer, Brownie [pitching coach Scott Brown] and Walker Buehler really helped his development, and you’re seeing that pay dividends right now.”

In this contest, Sheffield, a 6-foot, 185-pounder, got stronger as the game progressed. He sat his typical 94-96, and up to 97-98 mph with his fastball, and didn’t deviate from that mark the entire night. He also showed the ability to throw his fastball on the hands of lefthanded hitters with effectiveness, particularly against All-American Nick Banks. Meanwhile, Sheffield had a different approach tonight than when we saw him earlier this season against Mississippi State. Back then, Sheffield threw a lot of curveballs, and it’s a pitch that he sometimes has trouble commanding. Against the Aggies, it was primarily fastball/changeup with a few curves sprinkled in the repertoire. Sheffield was able to command his 84-86 mph changeup, and the pitch faded low into the zone with effectiveness.

He finished the night with five strikeouts, no walks and allowed just a run (unearned) on six hits in seven innings. And he’s now thrown 31 straight innings without allowing an earned run.

“I think part of our approach [primarily fastball-changeup] was partly the opponent and his development. He wasn’t at this point with his changeup last year, and now he’s got great confidence in the pitch and he’s not naked out there when he loses one of his pitches,” Corbin said. “He has the command and confidence now to go back and forth between his pitches, while pitching on both sides of the plate. If he’s in a hitter’s count, he now has the ability to decelerate a pitch with effectiveness. You have to be able to throw more than average plan of pitching against those guys, and he did.”

Both Sheffield and the A&M pitching staff left lasting impressions.