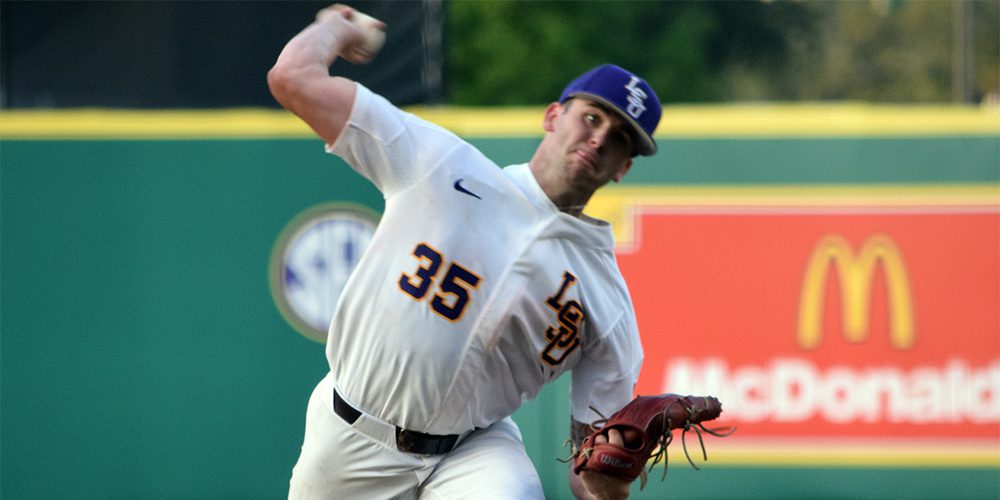 BATON ROUGE, La. — We’ve broken down what makes LSU righthander Alex Lange go so many times, it’s like a broken record at this point.

Entering Thursday’s series opener against Auburn in a crucial SEC series that LSU hopes keeps its national seed hopes alive, Lange had a 3.27 ERA in 74.1 innings. That would be well above average, unless your name was Alex Lange. The junior righthander, who’s expected to be a first-round pick in a few weeks, has been a mixed bag of results at times this season. Our first glimpse of Lange earlier this season was against TCU when he allowed six runs on five hits in 1.2 innings and in front of a throng of scouts. The second time, it was a gutsy outing on the road against Florida. In that one, Lange ran into some trouble early in the game, but used his usual filthy stuff to get out of jams and struck out seven and allowed just a run in eight innings.

Lately, it seems like Lange has found the right mix to be successful. Yes, he allowed three runs in 5.2 innings and walked eight against Kentucky three weekends ago. However, the start before that against Ole Miss resulted in seven shutout innings, and he was strong the last two weeks, allowing two runs in 7.1 innings and striking out 10 against Alabama, while striking out five and allowing just three runs in a complete game against South Carolina last weekend.

Lange was impressive in those outings. He was dominant and vintage Lange in a 4-0 win over Auburn, though, showing good command of his breaking ball and total control from start to finish in just the second shutout of his decorated career.

〈
Previous Article Off The Top Of My Head
Next Article Rutschman, Heimlich Lift Beavers
〉