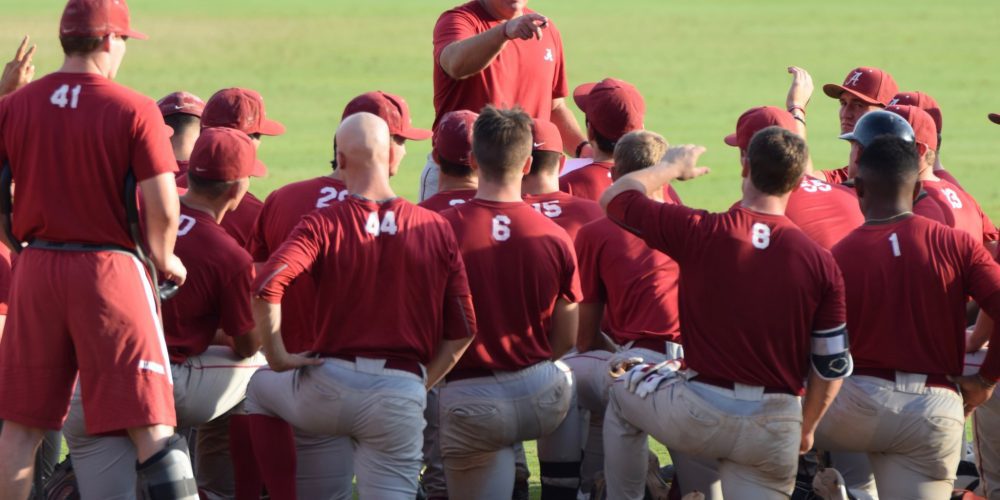 TUSCALOOSA, Ala. — His Friday practice is over, and Greg Goff is playing tour guide. “You have to see where the Bear walked,” he says. As he retraces Bear Bryant’s steps through the tunnel underneath Alabama’s football stadium, his 6-year-old daughter Kenzie does cartwheels toward the field — and you get the sense that Goff wants to do cartwheels of his own. At one point, Goff reveals that he made a bet with one of his assistants that someday he will run out onto the field with the football team.

Goff grew up as an Alabama fan in a small town in Tennessee, and now he finds himself as Alabama’s head baseball coach. It hardly seems real for the man who led Montevallo (Ala.) to its first Division II World Series appearance in 2006, then left to take over a Campbell program coming off an 11-win season in 2007. He admits that he wondered after a couple of years if he’d made a huge mistake by going to Campbell, a private school in tiny Buies Creek, N.C., that was prohibited from playing on Sundays for religious reasons. But despite all the disadvantages, Goff led the Camels to their only three 40-win seasons in program history and their second NCAA tournament appearance in 2014. Then he left for Louisiana Tech, and he proceeded to lead the Bulldogs to regionals in his second season — their first postseason appearance since 1987.

That track record of building unlikely winners made Goff a hot name on the coaching carousel this summer, and Alabama picked him out of a strong field of candidates to fill its coaching vacancy. It’s his dream job, and he says he has to pinch himself every day to make sure it’s all really happening.

“I get tears just thinking about it. I’m living a dream. God has blessed me in ways I just can’t even tell you,” Goff says, sitting on a bench just outside the grand center-field entry plaza to Alabama’s new $42 million baseball stadium. “Every day I come in and look at this park, I see the commitment level, and it’s Alabama, a place I grew up wanting to be. It’s just amazing what they have done. I’m just a guy that comes from a little small town, has worked hard, and God’s opened up some doors. I’m thankful for the players I’ve had — you’ve seen the players I’ve had, guys that have worked hard and bought into the system that we’ve had. I look out sometimes and I go, ‘I’m really at Alabama?’ It’s just amazing.”