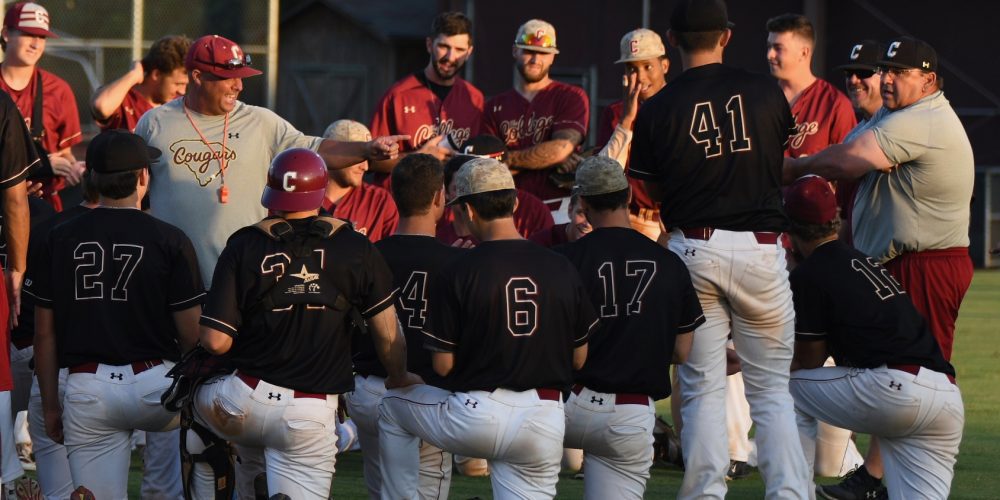 CHARLESTON, S.C. — You can see it in Chad Holbrook’s face, and the way he bounces around during practice, the way he shifts from foot to foot while listening to Jim Toman address the team after the scrimmage. You can hear it in Toman’s loud, distinctive voice as he calls out compliments and asks for applause for players who made good things happen that day: “Give it up for K.J.” … “Give it up for Dupree.” … “Give it up for Tommy.”

You can see it in the laughing faces all around College of Charleston’s postgame huddle when Holbrook takes over the meeting and says, “Let’s give it up for Coach Toman!”

These guys are having a blast. The players are feeding off their renewed energy, and vice versa.

After Matt Heath’s two-year tenure as head coach ended in discord and controversy last spring, College of Charleston needed a fresh start just as much as Holbrook and Toman did. They are two of the nation’s most accomplished and respected recruiters, and they had their share of success as head coaches at South Carolina and Liberty, respectively, but those tenures were cut short after the Gamecocks missed the postseason this year and the Flames missed out last year.

Toman had helped build some great clubs as Ray Tanner’s recruiting coordinator at South Carolina before Holbrook assumed that same position. When Tanner became AD, he tapped Holbrook to replace him as head coach, but he decided it was time for a change this summer. The breakup has strained the relationship between Tanner and his former assistant — a relationship that was once extremely close. Holbrook said he hasn’t spoken with Tanner since, and he seems disappointed about it.

But Charleston has offered Holbrook and Toman another chance at professional fulfillment, and personal happiness. Even from the outside, it was pretty clear over the last couple of years that the pressure of the South Carolina job and the harsh criticisms of a discontented fan base took a heavy toll on Holbrook, who seemed to become more withdrawn and tightly wound, as though constantly bracing himself for the next blow. Now, he seems like himself again, like a massive burden has been lifted from his shoulders. He seems thrilled to be freed up to have fun coaching again.

“There were some tough moments at South Carolina, but I loved my time there,” Holbrook said. “I was a part of two national championship teams, three trips to the World Series, five super regional trips — I had a great run there. There were some difficult moments, but I’m having the time of my life now and I couldn’t be more thrilled to be here. A lot of that is because of the coaches I’m around and the players I’m around. Our players say, ‘You’ve given us great energy,’ but the players have given us great energy too, because they’ve been excited to come here and practice every single day. I’ve always loved coaching, but my love for it is at an all-time high right now because of where I’m at and the kids that I’m coaching.