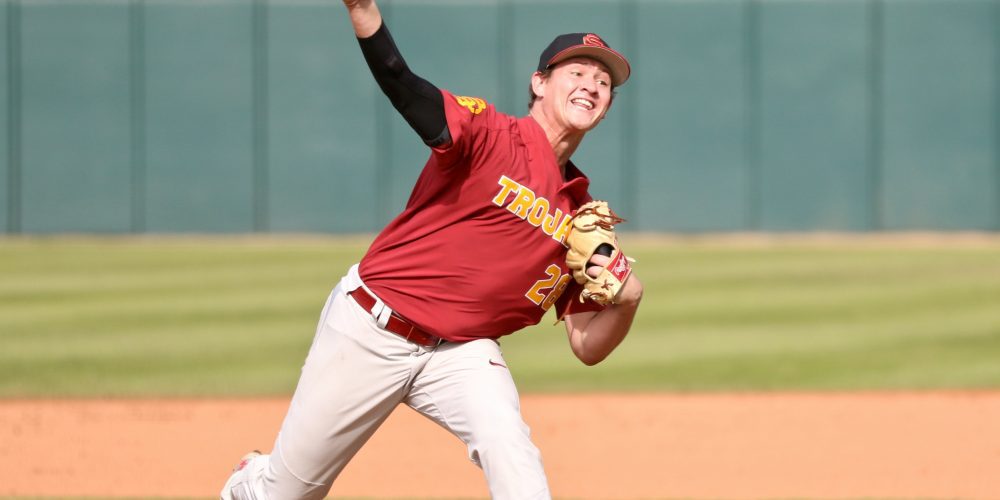 Dan Hubbs was tired of seeing the same pattern repeat itself.

USC’s head coach had seen back-to-back seasons derailed because of injuries to his pitching staff. In 2016, the Trojans’ presumed weekend rotation of Kyle Davis, Mitch Hart and Merrick Crouse all hit the figurative disabled list for significant chunks of the season. Brad Wegman stepped into the rotation and then had to be shut down for the rest of the season. Hart expected to bounce back and return to form last year, but he and Wegman were slowed last fall. Hart built up to opening day and threw six innings of one-hit ball, but it went downhill quickly as he made only two more shots before he was shelved for the season and had to have rotator cuff surgery.

Hart’s injury put a huge dent in Hubbs’ pitching plans with an already thin staff following the departure of eight arms to professional baseball. The Trojans needed to stay 100 percent healthy to have a real shot to compete on the mound in the always tough Pac-12 conference. But history repeated itself and USC couldn’t avoid arm injuries. They lost another starter early in the summer when C.J. Stubbs had to have Tommy John surgery, which will cost him the 2018 season after he had worked his way into the rotation last year.

“I was getting frustrated with the number of things that were coming up that I didn’t think that we should be having,” Hubbs said of the arm injuries the Trojans sustained.

He called a round table discussion. He met with the USC team doctor, the Trojans’ trainers, the strength coach and his staff. He talked with coaches on the West Coast. He checked in with coaches around the country to see what common issues and concerns they were also encountering.

“I don’t think we’re the only ones that have been hit by the injury bug on the mound and we’re seeing it a lot and we’re seeing it with guys that just get here, some younger guys that don’t have a lot of innings under their belt necessarily,” Hubbs said. “We’re not doing much differently than I’ve done for 17 years out here in terms of our throwing and in terms of our practice. Our lifting isn’t that much different.”

So why had the Trojans and other across the country seen an uptick in injuries as pitch count awareness and focus on pre and post-throwing arm care techniques at an all-time high? One of the consistent refrains from coaches was noting that today’s players are singularly focused on baseball and playing year round. Baseball is a constant and the concept of an offseason has been somewhat lost.

Hubbs feels that has an impact on the developing high school and collegiate arms, so he made a decision. He shut down every USC pitcher for the summer. No matter if a pitcher had thrown seven innings or 70, he shut them down. The Trojans added more structure to their throwing program and have been more diligent in monitoring varying factors, including strength training, arm care, conditioning and warmups.