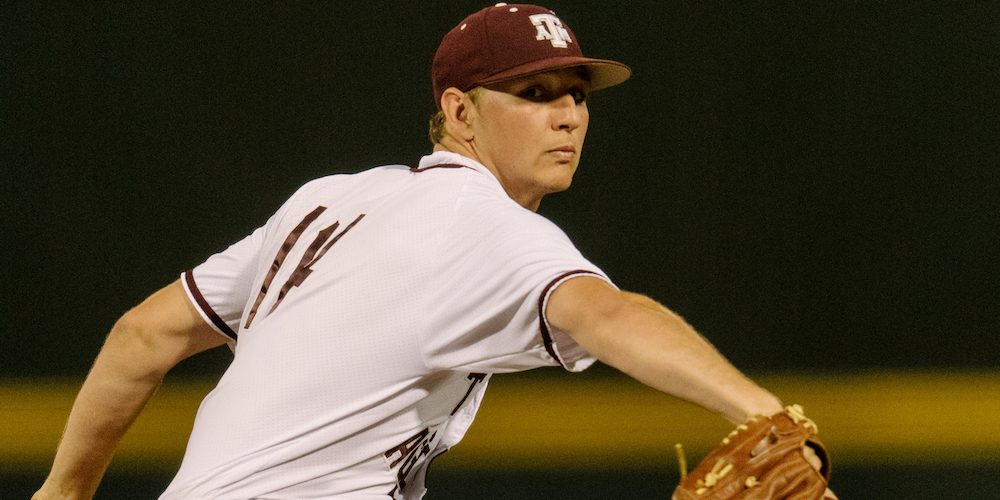 COLLEGE STATION, Texas — Texas A&M was supposed to be in rebuilding mode last season. Instead, it did something two previous, more dominant teams, failed to do – get to the College World Series.

The Aggies have been on quite a run under head coach Rob Childress. They reached the NCAA tournament for an 11th-straight season last year, won a regional for the third-straight season and advanced to the CWS for the first time since 2011.

They don’t appear to be slowing down anytime soon. While the Aggies lost a pair of weekend starters in Corbin Martin and Brigham Hill, they got a little lucky this past summer when lefthander Kaylor Chafin and righthander Cason Sherrod decided to return to College Station for another campaign. They also fared well in the draft with some of their high school prospects, while shortstop George Janca took a huge step forward at the Cape Cod League.

All those pluses set the stage for what has been a highly competitive and intriguing fall in Aggieland.

“You know, this team has bene incredibly competitive since day one. Before we even started the baseball segment of our fall, these guys were really competitive in other aspects,” Childress said. “We just have very special leadership, and the thing about our team is that we’re still fairly young on paper from a roster standpoint, but we’ve got a lot of experience back. We’ve got a nice crop of sophomores who played every day.

“Our juniors and seniors have done a fabulous job of leading and really have helped lay the foundation for our incoming players – both freshmen and junior college transfers,” he continued. “I think [when compared to this time last fall] we’ve started out more efficient and are playing at a little higher level. I think that’s pretty easy to say at this point.”

While the Aggies have plenty of solid hitters back, including All-American middle infielder Braden Shewmake, the biggest takeaway from scrimmage action is that they’ll be loaded from a pitching standpoint. Not only does A&M have many talented arms, it also has the ability to match up well with lefties and righties.

It’s time to take a deep dive into the Aggies as fall workouts are coming to a close.