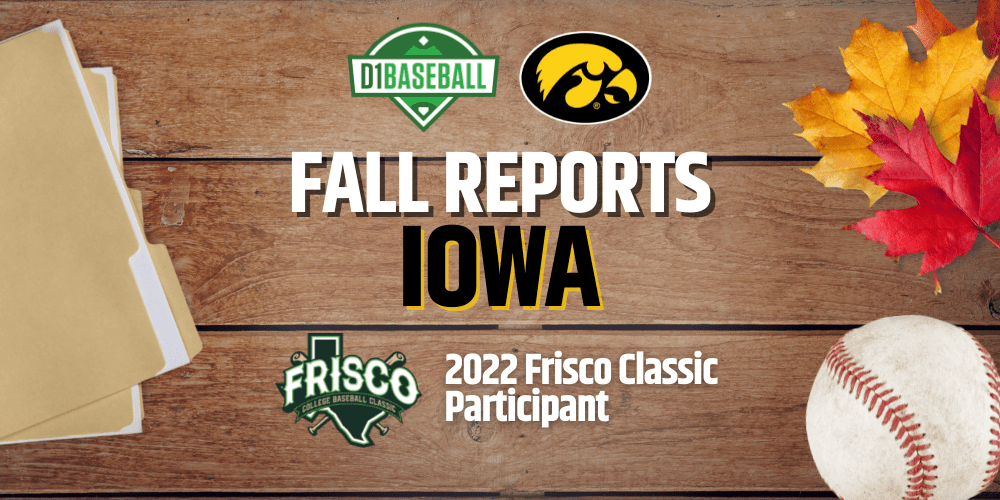 IOWA CITY, Iowa — Expectations are running high once again for the Hawkeyes as the Rick Heller era continues to build. Last spring, the Hawkeyes won seven of their final 10 series to finish the regular season with a 26-18 record in Big Ten-only competition. They tied for fourth in the league standings and went to Regional selection day as a bubble club. Although they would go no further in 2021 than their regular season-ending sweep at Michigan State, the Hawkeyes should once again contend for a Big Ten championship, as well as a Regional bid in 2022.

In order to achieve such lofty predictions, last season’s staff ace Trenton Wallace must be replaced, as well as Saturday starter Drew Irvine. Wallace, an ABCA/Rawlings All-American, was the first Hawkeye to be named the Big Ten Pitcher of the Year. The southpaw finished 7-1 with a 2.34 ERA. He led the Big Ten in ERA (2.34) and wins (7), while ranking third in strikeouts (106). He was selected in the 11th round and signed with Toronto. Irvine was also drafted and signed in the 19th round to the Pirates.

No worries Hawkeye fans, reinforcements are already on campus, and it all starts on the mound. South Dakota State transfer Adam Mazur is likely to replace Wallace in the Friday Night role. In their recent 29-14, 16-inning slugfest win against Iowa Western CC, the 6-foot-3, 175-pound right-hander wasn’t as sharp as he looked this summer in the Cape (3-0, 1.55 ERA, 29 IP, 18 H, 6 BB, 34 SO). However, he was up to 95 mph, while working his sinker mostly in the 90-92 range throughout his two inning start. He complements his No. 1 with a slider that will show better than average, and even plus at times. His top pitch on this look was an above average changeup at 85-87 mph with late fade and sink. Overall, Mazur is a three-pitch strike-thrower and should excel in the Ace role for the Hawkeyes this spring.

Lining up for starter innings behind Mazur are Connor Schultz, Jared Simpson and returning weekend starter Duncan Davitt. Schultz is a grad transfer from Butler who did not pitch during the Iowa Western game, but is a well-accomplished out-getter at the D1 level. He punched out 193 with just 51 walks in 185 innings, good for a 3.79 career ERA in three-plus seasons at Butler. His career ERA was inflated last spring as he posted a 6.22 while battling injury. When healthy and at his best, Schultz controls five pitches; fastball, changeup, slider, curve and cutter. His No. 1 sits 89-91 on a downward plane and touches 93. His changeup is his next best pitch, followed by a curve. Both are at least average offerings.

Simpson is a lefthanded Missouri transfer who touched 93, but sat more 90-91 against Iowa Western. He struck out the side for a 1-2-3 inning of work. He showed good arm speed on an 80-81 changeup, but tended to guide his curve/slurve breaking ball. He throws easy with a loose arm path, but it has some length and can be tough to sync with his lower half at times. He found little success last spring for the Tigers (22.95 ERA, 6.2 IP, 15 H, 10 BB, 6 SO), but the Hawkeyes have a history of developing pitching and successful reclamation projects. Simpson has also performed in the past while in the junior college ranks. During his 2019 season at Iowa Western the left-hander finished 7-1 with a 2.33 ERA and 68 SO in 54 IP.

Davitt finished the 2021 season with nine starts and 13 appearances. He posted a 5-2 record with a 5.55 ERA in 48.2 IP. He did not pitch against Iowa Western, but typically will bring a four-pitch mix to the mound from a three-quarter slot. He’s a strike thrower with a near average slider with spin rates in the 2600s as his best offering, to go along with a fairly straight 90-92 fastball and a solid feel for a low-spin changeup. The 6-foot-3, 220-pound Davitt is at the top of his game when mixing speeds and spotting locations.

The bullpen should be anchored by low-90s submariner Dylan Nedved, lefties Cam Baumann and Ben DeTaeye, as well as right-handers Luke Llewellyn, Ty Langenberg, Casey Day and Will Christopherson. Christopherson was especially impressive during his relief appearance against Iowa Western. The lanky righty released a nasty slider from a low three-quarter slot at 79-82 mph. The pitch was particularly effective against right handed batters, as he struck out two on buckling breakers during his only inning of work.

The senior Nedved looks like a reliever with a sidearm slot, but offers three usable pitches starting with command of a 90-91 fastball that he works in and out. His next best pitch is low-80s change with impressive life. He can also slide it a bit with a breaking ball that flashed late tilt at 80 mph. He struck out the side during his perfect inning of work, freezing the Reiver bats with well-placed heaters on the inside corner

The aggressive Baumann is a tough competitor who grinds it out with an 89-91 mph fastball, 70-72 curve and a best pitch changeup that he sells with good arm speed. Another lefty, DeTaeye controlled three pitches with some funk and deception. His fastball peaked at 89, while his best pitch changeup arrived at the plate in the 76-77 mph range.

Llewellyn, a 6-foot-4, 230-pound junior college transfer, tossed two innings, showing a 90-92 mph fastball and an inconsistent mid-70s curveball. He’s a long armer who will need to sync all his parts to consistently command the baseball.

Langenberg also went two innings of relief, featuring an 88-91 sinking fastball from a three-quarter slot. It was an out of the shoulder release point which gave it good deception. His best offering on this look was a mid-80s changeup.

Day is another four-year transfer for the Hawkeyes, returning to his native state of Iowa after a one-year stint at Wichita State where he red-shirted after Tommy John surgery. He sat 90-92, touching 93 with an occasional sharp slider during his one-inning relief appearance.

The future is also extremely bright on the bump for the Hawkeyes with dual-sport star Brody Brecht and under the radar recruit Marcus Morgan. Morgan was a four-sport athlete as an Iowa prep. He’s already made big strides with his velocity since the summer of 2020 when he sat 85-87 mph at the Midwest Scouts Association Showcase in Kansas City. Against Iowa Western, the uber-athletic, loose-armed right-hander sat 90-92 mph with a high spin (2600+ rpm) fastball. The pitch was released super easy out of a three-quarter slot, lending one to believe there is much more in the tank, especially considering his current 6-foot-2, 175-pound frame.

At 6-foot-4, 210 pounds, Brecht is built differently than Morgan, and is much more famous. Also an Iowa prep, he was one of the top prospects in the country for the 2021 MLB Draft. He’s also a wide receiver for the nationally ranked (No. 2) football team. At his best, the righthander pounds the zone with a 95-97 mph fastball and a plus slider. However, there is some cleanup needed with his hooking arm path in back for continued good health and turning his control into consistent command.

In 2021, Iowa’s offense ranked in the top five in the Big Ten in nine offensive categories. They led the league in doubles (93), triples (12), walks (243) and OBP (.385), while ranking fifth in runs (277), RBI (256), and stolen bases (44). Ben Norman was the biggest loss from this powerful offense. He led the league in RBIs (53) and triples (4), while ranking in the top 10 in six offensive categories. The lefty center fielder starred in the MLB Draft League before signing professionally with Great Falls of the Independent Pioneer League.

Returning to the everyday lineup for the Hawkeyes are five starters, including All-Big Ten second baseman Izaya Fullard. He earned third-team All-Big Ten honors last season, hitting .296 with 48 hits, including nine doubles, and 21 RBIs. Fullard was a bit out of sync on this look, finishing with just one infield hit, but he walked three times and went deep oppo for a well-hit fly out. At his best, Fullard hunts the fastball and punishes it when he gets it.

In their slugfest victory over Iowa Western, one of the most noticeable assets was the depth of talent and power potential at the plate. Iowa rapped 11 extra base hits among their 22 total knocks. Leadoff man Brayden Frazier was 2-for-5 with an RBI. He’s a plus runner with gap power. Defensively, he started in left field where he struggled a bit with routes and showed adequate arm strength.

The man in the middle of the Hawkeye lineup was first baseman Peyton Williams. At 6-foot-4, 240-pounds, he’s imposing in the box and a bat first prospect. The lefty slugger was 2-for-4 with a pair of walks on the day.

The most impressive performer in the lineup on this day was catcher Brett McCleary. The senior was 2-for-4 with a double and a home run. His home run was a no-doubter as he deposited an 89 mph hanging fastball over the left field wall and his double was smoked on a line to his pull side as well. His two outs were a deep fly out to right field that was snagged on a leaping catch on the track and a rocket to third base for an unassisted force out. The backstop also showed potential to shut down an opponent’s running game with a solid average to better arm and POP times in the 1.90s between innings.

Juco transfer Sam Hojnar was also a part of the multi-hit platoon going 2-for-6 with two RBI. The twitchy Hojnar has oodles of athleticism and tools that include plus run speed and plus bat speed. Both could impact the game, and Iowa is a great place for the switch-hitter to turn his tools into skills and performance. On this look his right-handed swing was much more loose and natural than his left. However, he showed solid plate discipline from both sides.

The depth of bats continued with production from a pair of freshman; outfielder Alec Nigut and infielder Sam Petersen who both homered. Nigut finished with four RBI, three coming off a towering three-run blast to right centerfield. He also walked twice. Petersen also had three RBI.

Sophomore utility man Anthony Mangano collected three RBI and sophomore infielder Andy Nelson roped a pair of ribbies. The athletic Nelson was nursing a sore hamstring, but his impressive strength and fast-twitch were noticeable. When healthy, he’s a plus-plus runner with tools to impact all areas of the game.