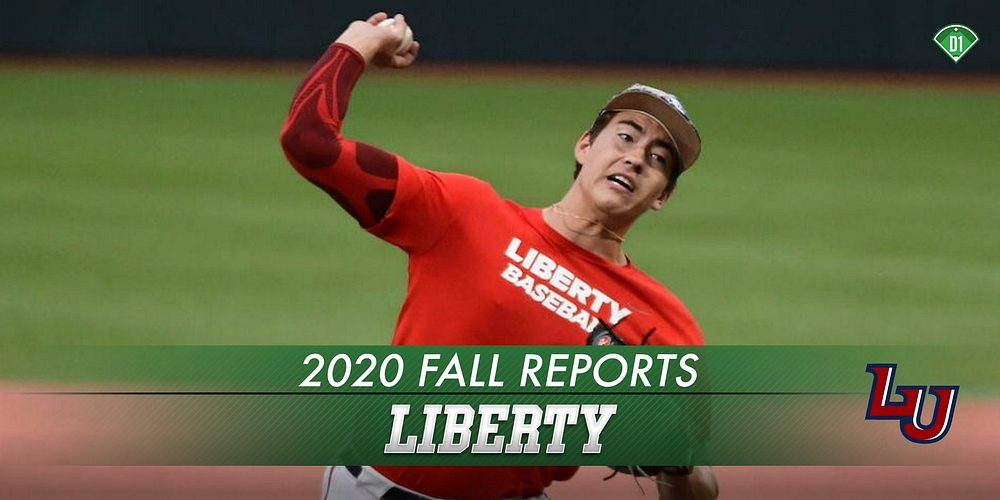 LYNCHBURG, Va. — Fifth-year head coach Scott Jackson has built his Liberty program around a strong foundation on the mound, and that bedrock remains as solid as ever heading into 2021. In 2019, the Flames rode a pitching staff that ranked 21st in the nation in ERA (3.63) to their first regional appearance since 2014. In the pandemic-shortened 2020 campaign under the guidance of new pitching coach Matt Williams, Liberty’s staff ERA dropped to 3.04.

Ace Noah Skirrow is gone, and weekend starter Joe Adametz is out for the season after having Tommy John surgery, but the Flames still have plenty of very good returning pieces on the mound, and their recruiting class is loaded with high-upside power arms, giving this staff perhaps the highest ceiling of any recent Liberty group. It helps that several notable returnees have taken significant steps forward under the tutelage of Williams.

“Matt Williams is really good,” Jackson said. “I’ve learned so much from him, and he’s done an unbelievable job of building a staff. And in the transfer portal we were able to get some guys that give us depth, and not just depth but different looks from both sides.”

One of those transfers stands a good chance to step into one of Liberty’s vacated weekend rotation roles: lefthander Trevor DeLaite, who posted a 2.12 ERA at Maine in 2019, with a sterling 41-10 K-BB mark in 34 innings of relief. A slingy three-quarters southpaw who stands out for his strike-throwing ability and competitiveness, DeLaite pounded the zone at 88-89 mph with a very good 80 mph changeup in two scoreless innings at Thursday’s scrimmage.

Liberty’s highest-profile newcomer is blue-chip freshman Trey Gibson, a chiseled 6-foot-4, 240-pound Adonis with serious arm strength and big-time stuff. Gibson was one of the top-ranked prep arms in the state of Virginia last spring, and he lived up to his lofty billing in Thursday’s scrimmage, sitting comfortably at 92-94 and bumping 95 while flashing a true hammer breaking ball at 80-81 with tight spin (up to 2611 rpm) and a swing-and-miss 85-86 mph changeup with hard, late diving action. As evidence of his uncommon polish for a power-armed freshman, Gibson was comfortable throwing his changeup to righties and lefties alike. He stayed in control of his clean high three-quarters delivery, showing excellent balance and tempo. Simply put, he looked like a pitcher with the potential to become Liberty’s first-ever first-round pick in a few years, and an instant weekend starter as a freshman.

“He’s very mature. There’s not many bodies like that that are freshmen, but you know the the most impressive thing about him is just the way he goes about his business on a day-to-day basis,” Jackson said.”He knows he’s good, but he’s got a desire to really want to be great, and he’s been fun to watch. And he’s got he’s got four pitches. His best pitch is that curveball just from an analytics standpoint with what it does, but he’s got a good feel for the changeup, he’ll throw it to righties and lefties, and he came in with the cutter and we’ve tried to make it a little bit longer and turn it into a slider. So he’s got a he’s got some options with four pitches. We’re lucky to have him.”

The returning mainstay of the rotation is third-year sophomore lefthander Mason Meyer, a prime example of a developmental success story. Meyer has always had pitchability, and he won plenty of big games as a freshman “midweek monster,” helping the Flames go 7-3 against ACC opponents during the regular season and then shutting down Tennessee in the regional opener. But he did all that with an 86-88 mph fastball, a good changeup and a serviceable slider. On Thursday, he sat comfortably at 90-91 and touched 92 in the first inning, and his slider showed considerably more power at 82-83, giving him another putaway pitch to accompany his still-excellent mid-80s changeup.

“He’s really worked hard; he spent two or three weeks in the summer down in Wilmington with Hudson Rose and did some stuff just to move better and to be a better athlete on the mound, and he knew that’s what he needed to work on,” Jackson said. “He came back and is just moving better, has quickened the arm and it’s giving him a chance to do some things he wasn’t able to do last year.”

Six-foot-4, 190-pound fourth-year sophomore righty Mason Hand is also back in the starting mix after going 3-1, 2.18 in five appearances (four starts) last spring, his first season back after Tommy John surgery. Now that he’s another year removed from surgery, look for Hand to take another step forward. His quality three-pitch arsenal plays well in a starting role.

The bullpen should be well stocked with quality arms from both sides. Righthander David Erickson showed off his trademark power sinker at 90-92 and bumped 93 on Thursday, mixing in a decent slurve. Second-year freshman Mason Fluharty was particularly impressive in his 1-2-3 inning, attacking at 91-92 with a high-spin fastball in the 2400-2500 rpm range and getting two strikeouts with his wicked slider at 79-80 with hard tilt and excellent tight spin up to 2710 rpm. Look for that duo to anchor the late innings for the Flames. Juco transfer Tyler Germanowski is a 6-4, 230-pound ox with a power arm to match; he sat 93-94 and bumped 95 and flashed a promising splitter at 85-87, but his control remains a work in progress. If he can continue to clean up his arm path and improve his strike-throwing, he has a chance to be a shutdown arm toward the pack of the bullpen also.

And Hungate isn’t Liberty’s only exciting two-way talent among its newcomers. The Flames were delighted to land former Florida State commit Trey Carter late in the recruiting process, because his tools are “off the charts,” as Jackson put it. A 6-4, 210-pound righthander, Carter has run his heater up to 96-97 mph this fall, and he seems certain to carve out a big role on this pitching staff early in his career.

In addition to Fluharty, second-year freshmen Emmanuel Johnson and Christian Gordon plus third-year freshman Brogan Beckner and D-II transfer Fraser Ellard will give Liberty options from the left side. Johnson is a loose, athletic three-quarters sinkerballer who showed excellent feel to spin a sweeping slurve at 72 mph with very high spin (up to 2985 rpm). Gordon worked at 86-88 from a higher slot and mixed in a decent three-quarters breaking ball at 77. Beckner is a lanky 6-foot-4 over-the-top pitcher with excellent induced vertical break on his 88-89 fastball, which pairs very nicely with his big downer curveball in the low 70s. And Ellard is a funky lower-slot lefty with a nice three-pitch mix.

“I think on the mound we’ve given ourselves a chance to kind of take a big step forward [as a program],” Jackson said.

Offensively, Liberty hasn’t exactly been a juggernaut in recent years, but the Flames should remain good at manufacturing offense behind a skilled, experienced group of returnees. And the defense should be rock-solid, led by a quartet of fourth- or fifth-year players in shortstop Cam Locklear, second baseman Will Wagner, third baseman Trey McDyre and first baseman Logan Mathieu. A 6-foot-3, 225-pound bruiser with good barrel awareness, Mathieu turned in three good at-bats Thursday, drawing a walk and then lining an RBI single the other way on a backdoor slider and pulling another line-drive single on a Gibson changeup. He’ll be a key lefthanded run producer in the heart of the order, and he should be Liberty’s most dangerous power hitter.

Locklear also has a history of grinding out competitive at-bats and making hard line-drive contact, but he really shined Thursday for his defense, showing off superb body control, an advanced internal clock, excellent lateral range and rock-solid fundamentals. He and speedy spark plug center fielder Jaylen Guy are the glue in the middle of the diamond.

“(Locklear) is just so much fun to watch. He and Jaylen, those two guys in the middle of field for us bring so much energy, not just when we play in a game but every day in practice,” Jackson said. “They just make other guys around them better.”

Guy figures to be flanked by on-base machine Brandon Rohrer in left and Bowling Green transfer Jake Wilson in right. Rohrer stands out most for his patient offensive approach (he drew 39 walks against 31 strikeouts in 2019), and he plays quality defense on either corner. Wilson gives Liberty another de facto center fielder in right; he’s a good runner and a tough out from the left side, with a nice contact-oriented swing that has helped him compile a .302 career batting average in 510 career at-bats for the Falcons.

Carter could also factor into the outfield mix, because he’s a live athlete who runs a 6.7-second 60-yard dash and flashes plus raw power, though he’ll need some refinement at the plate. Likewise, Hungate could see action on the infield, and he showed off some righthanded bat speed with a pair of deep drives in Thursday’s scrimmage.

Behind the plate, incumbent starter Brady Gulakowski is still working his way back from a knee injury, but the Flames are hopeful he’ll be back to full strength in the spring. In the meantime, veteran Gray Betts and quick-twitch freshman Three Hillier are both more than capable behind the plate, and Betts has shown a knack for controlling the strike zone and getting on base in his college career. Hillier has a nice lefthanded stroke and could develop into an impact player as his career develops. The same goes for freshman middle infielder Ethan McCormick, whom Jackson thinks could become an offensive second baseman as he gains strength.

One more newcomer to keep an eye on is graduate transfer Aaron Anderson from Division II Flagler (Fla.), a three-year starter with a career .342 average. Anderson is a switch-hitter who also performed well against good competition in the Northwoods League, and he could see playing time at a corner spot or DH.

With so many veterans back due to the NCAA’s blanket eligibility waiver plus the addition of some nice pieces in the transfer market and the regular recruiting process, Liberty should have plenty of competition for playing time in the lineup as well as on the mound.

“College baseball has got a chance to be as good as it’s ever been and we’re no exception,” Jackson said. “I mean, even in practice it just really allows you to focus so much on the younger players in their development because we’re so veteran.”

A Note On Classifications: After the 2020 season was canceled, the NCAA granted all players another year of eligibility, leading to some confusion and inconsistency over how refer to a player’s class. At D1Baseball, we have decided to handle it by denoting the number of years a player has been in college, followed by his year of NCAA eligibility. For example:

• A freshman who is new to Division I this fall shall be known as a “true freshman” or just a “freshman.”