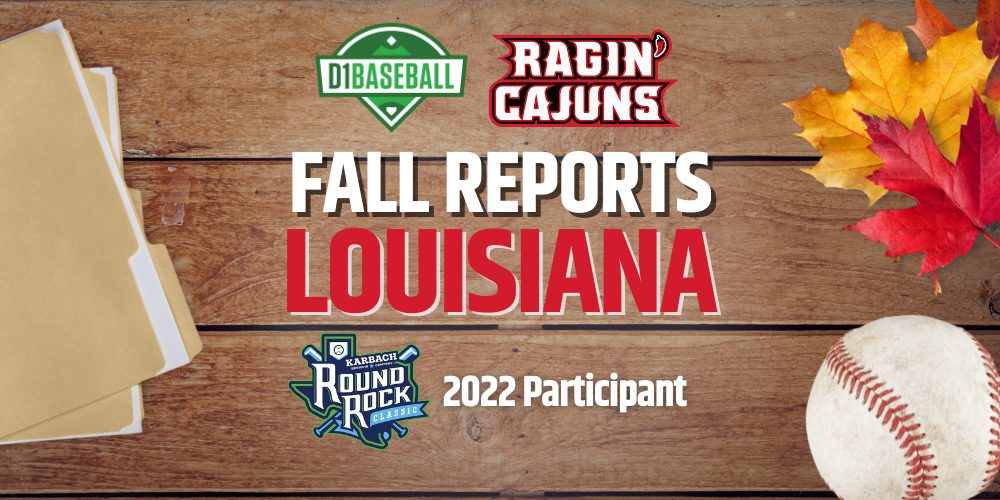 Louisiana head coach Matt Deggs can finally see light at the end of the tunnel.

When he took over the Ragin’ Cajuns program after the 2019 season, they certainly had a lot of work to do — particularly from an offensive standpoint. And things haven’t been easy since that point. UL went 8-9 in the shortened 2020 season before going 32-23 last season with a decent Sun Belt record.

Last season wasn’t bad, per se, but the standard in Lafayette is competing for the SBC crown and making the NCAA tournament. Neither of those goals were accomplished, thus they still have a lot to prove in his eyes.

The good news? The Cajuns made tremendous progress this fall.

“I think we’re athletic and I think we’re gradually starting to get more and more type of guys in here that kind of go with our offensive system and culture,” Deggs said. “We’re much more multi-dimensional offensively right now, and I think you saw some of that in the scrimmage against LSU. I thought we did a great job of getting after some fastballs in that scrimmage, and I thought we ran well. Now, we just must go out there in the spring and prove it.

“On the mound, I think we’re going to be one of those teams that is very efficient and will throw a lot of strikes,” he added. “We had a bunch of guys in that scrimmage who were in that 90-93 mph with their fastballs mold, and they also were able to pitch with a few different pitches. Throughout the fall, the most important thing is that we’ve thrown a lot of strikes.”

Louisiana has several intriguing hitters to watch as we dive into its fall workouts. But no one caught my attention more than Kinder La., product and shortstop Kyle DeBarge. DeBarge, a spark plug 5-foot-9, 170-pound, true freshman was outstanding in the doubleheader scrimmage against LSU and is expected to make an immediate, huge impact for this team.

As for the pitching staff, transfer Drew Shifflet had a strong fall and will factor into the weekend rotation, while righthander Hayden Durke continued to show this fall why he has incredible upside. Durke sat in the 96-98 mph range with his fastball against LSU, and Deggs said his command was strong to end workouts. That’s a promising development for an arm that could be one of the nation’s best at the backend of games.

Without further ado, let’s dive into the Cajuns.

We mentioned Kyle DeBarge in the opening of this story, and we’ll continue our discussion on him. It’s interesting because he kind of gave me shades of former Cajuns standout and third-round pick Blake Trahan, who, too, was a shortstop and from Kinder, La. Deggs, though, said Trahan was a bit more athletic at this stage of his career, but that DeBarge does have some similarities — in his eyes — to former LSU standout third baseman Alex Bregman.

Granted, Deggs wasn’t saying that DeBarge will equal Bregman’s production as a freshman. But at least for now, there are some striking similarities.

“Outside of Dylan Crews, I thought Kyle was the best player out there that night against LSU, and that’s saying something given the dudes that LSU has,” Deggs said. “Kyle is just a gamer. He’ll remind you a little bit of Trahan, but when I look at him, I see a lot of Bregman.

“Size wise, he won’t overwhelm you. But he’s a tremendous player and he plays hard. He’s an unreal competitor and he’s been a winner at every level. He’s come in and taken ahold of that shortstop job. He’s just one of those kids who’s all business all the time. He really throws and he can really handle the bat.”

Over at third base, the Cajuns are optimistic about Houston transfer Will Pendergrass. Pendergrass is a 6-foot-2, 200-pounder, who had a solid fall at the plate, while over at first base, you could see a move there from 6-foot-1, 190-pounder, Carson Roccaforte. Roccaforte hit .274 with four home runs last season, and Deggs feels there’s a lot more in the tank from a production standpoint.

At second base, keep an eye on junior college transfer Will Veillon and Bobby Lada. Veillon had a strong fall and Lada has made a strong transition to second base. He stood out in the fall with his bat and was one of the team’s best hitters during workouts.

Behind the plate, the Cajuns have someone who is ready to take a big step forward in 6-foot-3, 205-pounder, Julian Brock. Brock was stuck behind veteran backstop Drake Osborn last season. Osborn ended up leading the team in hitting. Brock has physicality in his frame and certainly has the tools to put together a strong 2022 campaign.

Where I’m most intrigued with this team offensively and positionally is with the outfield with Tyler Robertson, Heath Hood, Max Marusak, along with Conor Higgs and Connor Kimple.

Robertson is an impressive 6-foot-4, 200-pounder, who is how you draw them up from a prospect standpoint. He certainly made a strong impression at times last season, but his approach and overall hit tool looked on point in the scrimmage against LSU. Perhaps that is a sign of things to come. Hood is a 6-foot, 195-pounder, from Tyler (TX) JC, who had a terrific fall at the plate and put himself in position to be in the starting lineup. Kimple is a speed and strength guy and gives the Cajuns a viable option, while Higgs is an ultra-intriguing power bat. The 6-foot-2, 180-pounder, has 65-70 raw power, but Deggs said it’s all about putting all the puzzle pieces together with him. Finally, I can’t wait to see what Max Marusak can do in the spring. Marusak is a 6-foot, 185-pounder, who’s an exceptional athlete and who had high hopes at Texas Tech. However, things never really came together in Lubbock. He has shown a lot of potential this fall, though he did struggle at the plate against LSU.

“Heath Hood, I thought, really had a tremendous fall. I thought he showed a nice approach. I thought he just made Tyler Robertson better,” he said. “Max is just as athletic at Tyler, and we’re going to give him a chance to put all the pieces together. He reminds me a little bit of former Cajuns slugger Dex Kjerstad. He’s lightning in a bottle; we just need to see it.

“I thought Tyler stood out this fall,” he added. “He looks like an NFL safety out there. He’s athletic and it’s really starting to come together for him. He had a great fall, and he could play in the outfield or infield, really. He has big league ability. He’s going to play for a very long time.”

Two more names to remember include CJ Willis and Trey LaFleur. Willis showed a nice lefthanded stroke against LSU and hit an opposite field home run in the scrimmage, while LaFleur, a 6-foot-3, 195-pounder, will have an opportunity to help the Cajuns both from an offensive and pitching standpoint. He’s got some definite upside at the plate. Wamner Rincones is a name worth filing away, too.

The Cajuns have some arms to replace from last year’s pitching staff, namely a pair of weekend starters in Connor Cooke and Spencer Arrighetti. The good news? There are plenty of talented arms on this pitching staff, and talent is aplenty.

UL has several arms in the mix for the weekend starting jobs, but righthander Drew Shifflet and lefthander Chipper Menard lead the charge. Shifflet is an East Texas native who worked 15.2 innings for Texas last season. Now, after recruiting him multiple times, Deggs has his services in Lafayette. Shifflet was 91-93 mph with his fastball against LSU earlier this fall, while his curveball sat 78-80 mph with some nasty spin in the 2600-2700 RPM range. As for Menard, he’s a hard-nosed lefty who sat 87-90 mph with his fastball against the Tigers, while also showing a quality breaking ball at 75-76 mph.

“Just from a sheer attacking and stuff standpoint, I really like Shifflet. I’ve recruited him three times now, and I think you’ll see him somewhere in the rotation,” Deggs said. “Menard had the best inning of anyone against LSU and he’s really come on this fall.”

Righthander Tommy Ray, righthander Jacob Schultz, righthander Bo Bonds and lefthander Brandon Talley also could be in the mix for a rotation spot. Ray is a 6-foot-5, 215-pounder, who was up to 90-91 mph with his fastball this fall, along with a solid changeup and slider combo. Schultz is a veteran who could potentially fit much better at the backend of the bullpen. However, he can get up to 96 mph at times if he reaches back and will pitch comfortably at 91-92. As for Bonds and Talley, Bonds was impressive against LSU with a fastball up to 93-94 mph along with solid RPMs on the offering — topping out at 2450. He also attacked hitters with a 76-77 mph curveball with a 2355 RPM. Talley is more of a pitchability lefty who will sit 87-89 mph with his fastball, along with feel for a changeup. Like so many arms on this pitching staff, Talley has an aggressive, come at you approach.

For me, the X-factor for this Cajuns club is righthander Hayden Durke. The 6-foot-3, 205-pounder, arrived in Lafayette with high acclaim. And though he had some positives last season, he also looked like a young pitcher a lot of time. Durke needs to improve his command in the spring. He showed signs of doing just that at the end of the fall. But the raw stuff? The upside is undeniable. Durke was up to 95-96 mph with his fastball this fall with RPMs in the mid 2400s at times. He also showed a mid-70s curveball to go with a mid-80s changeup. For now, he will be at the backend of the bullpen with his velocity. But start the ’22 campaign on a hot note? You could see a shift in his role.

“He certainly had a strong fall,” Deggs said. “The big thing with Hayden is just going out there and harnessing his potential. The stuff is there. Now it’s about the opportunity and development. He has the fastball and breaking ball stuff.”

Lefthander Dylan Theut is a 6-foot, 188-pounder, who had a strong fall and will log some innings out of the pen, senior righty Jeff Wilson is an experienced arm back for another season and freshman righthander Bryce Calloway has some projectability. Calloway is a 6-foot-4, 230-pounder, who was 87-89 mph with his fastball with RPMs between 2400-2550. Clearly, there’s a lot more in the tank with the fastball, changeup and curveball combo.

Finally, remember the name Peyton Havard. Havard had a 2.25 ERA in eight appearances for the Cajuns last season but is ready to have a much larger role this spring. Havard lost 30 pounds in the offseason and got into terrific shape, per Deggs. His velocity jumped to around 90-92 mph with the fastball and he threw strikes around the zone with multiple pitches. He attacks hitters with a putaway changeup and a slider at 83-84 mph.