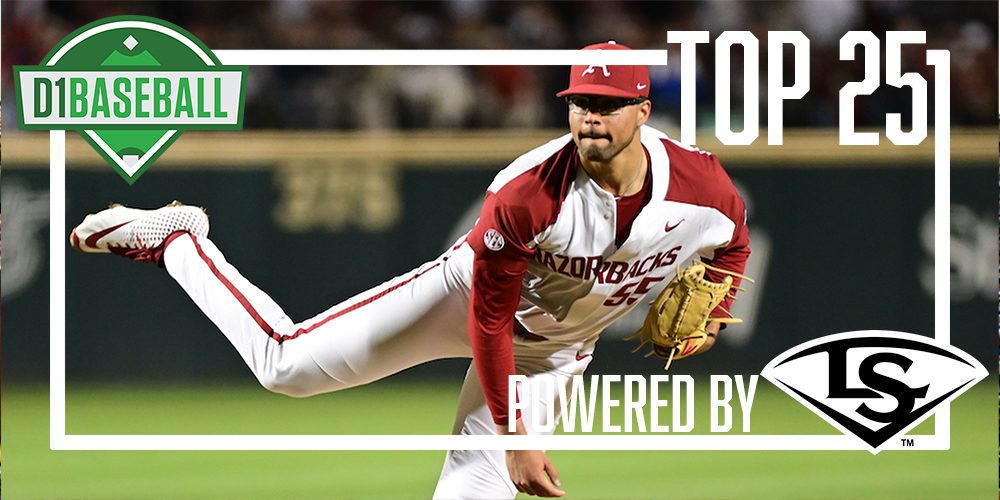 UCLA remains No. 1 for the sixth straight week in the D1 Baseball Top 25, powered by Louisville Slugger, and leads a trio of Pac-12 Conference teams at the top of the rankings. Oregon State follows UCLA at No. 2, and Stanford completes the trifecta. The Pac-12 powers all won conference series over the weekend, with UCLA and Oregon State holding steady and Stanford moving up a spot.

Three SEC teams make it back to back trios — No. 4 Georgia, No. 5 Vanderbilt and No. 6 Texas A&M — with two more SEC teams close behind. Arkansas jumps into the top 10 at No. 8 after sweeping Mississippi State, which falls six spots to No. 9.

A cluster of four teams from the Big 12 reflect how competitive that league is. West Virginia moves up three spots to No. 17, and Texas Tech jumps to No. 18 after taking a series from Baylor, which falls three spots to No. 21. Oklahoma State returns to the rankings at No. 22 after scoring 36 runs in a three-game sweep of Texas.

Big Ten leader Indiana makes its season debut in the rankings at No. 23, and Auburn returns to the Top 25, occupying the final spot in this week’s rankings. TCU, Missouri and Clemson all drop out after series losses.