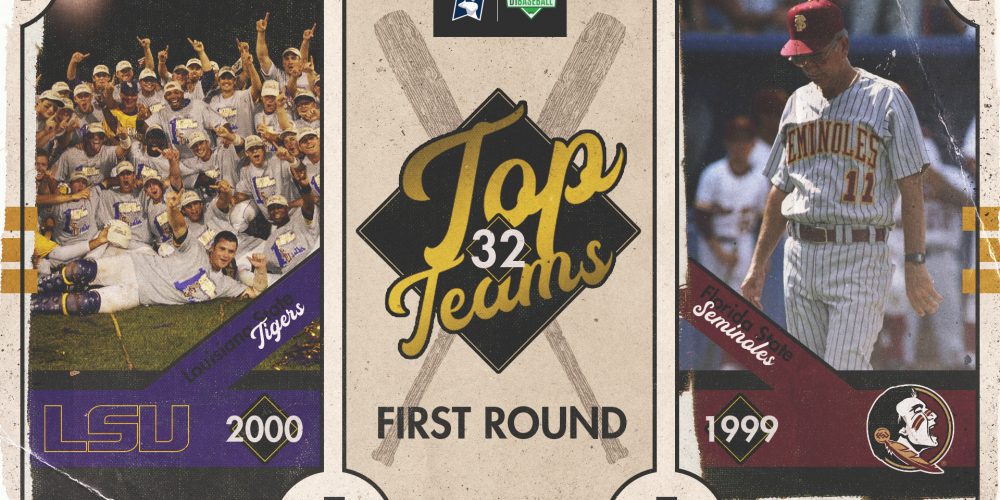 Skip Bertman’s LSU dynasty of the 1990s was capped off by the 2000 national championship, the program’s fifth title in 10 years. But heading into the NCAA tournament, this group was not the favorite to win it all; that was South Carolina, which went 25-5 in the SEC to finish 5.5 games ahead of LSU, the Western Division champion. Still, the Tigers landed the No. 2 national seed after running unbeaten through the SEC tournament, and the No. 1 national seed Gamecocks were stunned in super regionals by Louisiana-Lafayette. Meanwhile, the Tigers were cruising to an undefeated postseason run — they finished the season on a 13-game winning streak that started with their SEC tourney opener and ended with a CWS trophy. After blasting Jackson State and Louisiana-Monroe in the Baton Rouge Regional, LSU bludgeoned UCLA in a super regional sweep. Its bats stayed hot in Omaha, where it took down Texas 13-5 and Southern California 10-4, then it subdued Florida State 6-3 to reach the championship game against Stanford.

The Tigers trailed 5-2 after seven innings in the title game, but they stormed back against Stanford stopper Justin Wayne, tying the game with three runs in the eighth on homers by Blair Barbier and Jeremy Witten. That set the stage for another walk-off national title for LSU — it happened in 1996 on Warren Morris’ home run, and it happened in 2000 on Brad Cresse’s walk-off RBI single in the bottom of the ninth. CWS Most Outstanding Player Trey Hodges worked four shutout innings of relief to earn the win in the clincher and finished with a 1.69 ERA in 10.2 innings over three relief appearances in Omaha. Future big leaguers Mike Fontenot (.462 in Omaha), Brad Hawpe (.400 with three homers) and Ryan Theriot (.368) all came up big to lead LSU’s high-powered offense in the CWS, as did Barbier (.385 with three homers).

Mike Martin, the winningest coach in college baseball history, made 17 trips to Omaha during his illustrious career, but he never came closer to winning the biggest prize than he did in 1999. This FSU team was a buzzsaw, going 22-2 in the ACC to win the league’s regular-season title by 5.5 games and earning the No. 2 national seed — behind only No. 1 Miami. After scoring 47 runs in a 3-0 run through the Tallahassee Regional, the Seminoles kept mashing in a two-game sweep of Auburn in the supers. After beating Texas A&M in their CWS opener, they fell into the losers’ bracket with a defeat at the hands of Stanford, but they rallied back to beat Cal State Fullerton and then out-slug the Cardinal in back-to-back games, capped by Karl Jernigan’s walk-off, three-run homer in the 13th inning of the decisive game, lifting FSU to a wild 14-11 win. That set up a championship-game showdown against arch-rival Miami. The Hurricanes took control with five runs in the fifth inning to lead 6-2, and FSU’s comeback bid came up just short in a 6-5 heartbreak loss.

FSU’s Marshall McDougall nonetheless won the CWS Most Oustanding Player award (one of just two players in the 64-team era to win that honor without playing for the national champion) after hitting .385 with three homers and eight RBIs. Led by future big leaguers McDougall, Matt Diaz, Kevin Cash and John-Ford Griffin, this was a powerful club that led the CWS field with 13 home runs in the first year of the new minus-three bat standards; no other team had more than six homers in Omaha, and Miami hit just four.

How They Match Up: Power was a big part of the attack for both of these clubs. Led by Cresse (30 homers on the season), Fontenot (17 HR) and Hawpe (12 HR), LSU could still mash in the post-Gorilla Ball era. But FSU certainly had the big sticks to out-slug anybody in 1999, led by McDougall (28 HR), Diaz (21 HR), Cash (14 HR), Sam Scott (12 HR) and John Halliday (10 HR). But give the Seminoles the edge on the mound — they posted a 3.18 ERA that really stood out in an era that was still very offensive, while LSU had an aggregate 4.43 ERA one year later. From a pure talent perspective, neither one of these teams had any players who would become big league stars, but LSU had seven big leaguers on the roster (including pitchers Trey Hodges, Brian Tallet and Shane Youman) against FSU’s four (all of them hitters). Give LSU a slight edge in the raw talent category, but FSU was the more balanced team thanks to its better pitching.

Power was a big part of the attack for both of these clubs. Give @LSUbaseball a slight edge in the raw talent category, but @FSUBaseball was the more balanced team thanks to its better pitching. Who takes the W?