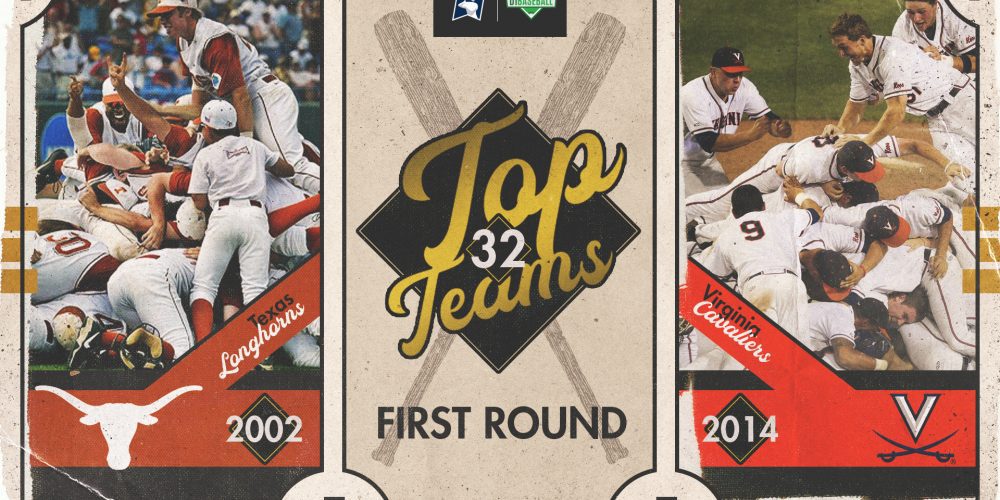 The first of two national title teams in four years for Augie Garrido at Texas, this group brought the Longhorns back to college baseball’s pinnacle for the first time since 1983. The ‘Horns were the class of the Big 12, going 19-8 in conference to win the regular-season crown by three games, then running through the losers’ bracket with five straight wins to capture the Big 12 tournament title and earn the No. 5 national seed. Texas then proceeded to go 9-1 in the NCAA tournament, with the only loss coming in its super regional opener against Houston. The ‘Horns bounced back from that 2-0 defeat by shellacking the Cougars 17-2 the next day, then taking the decisive third game 5-2. After winning a taut 2-1 pitchers’ duel over Rice in its CWS opener, Texas rode potent bats to a pair of wins against Stanford, 8-7 and 6-5. That set up a showdown against No. 6 national seed South Carolina in the CWS championship game, and the Longhorns kept on raking in a 12-6 victory.

This run truly launched the legend of Huston Street, then a freshman reliever who captured CWS Most Outstanding Player honors by saving all four of UT’s Omaha games, finishing with a 1.42 ERA in 6.1 innings. Justin Simmons made two starts in Omaha and won them both, posting a 2.57 ERA in 14 innings. Pitching and defense were this team’s greatest strengths; it ranked second nationally with a 2.83 ERA and fifth nationally with a .972 fielding percentage. Street was one of seven future big leaguers on this roster, though he was the only one to make any significant impact in the majors. But Texas did have some very good college hitters who put together loud seasons offensively, led by Jeff Ontiveros (20 HR) and Dustin Majewski (.401 with 10 HR). And future major leaguers Omar Quinanilla, Michael Hollimon and Curtis Thigpen anchored the airtight defense.

Virginia would take home the national title after sneaking into a regional as a No. 3 seed in 2015, but the 2014 team that fell just short of the championship was actually more talented and far more consistent from the start of the year to the finish. The Cavaliers entered 2014 as preseason No. 1 and spent the entire season ranked in the top five, going 22-8 in the ACC and earning the No. 3 national seed. After allowing just three runs in a 3-0 run through the Charlottesville Regional (which included two wins over Arkansas), UVa. dropped its super regional opener against upstart Maryland but bounced back with two convincing victories to reach Omaha. Virginia rode dominant pitching to wins over Ole Miss, TCU and Ole Miss again in bracket play, allowing just four runs total in that 3-0 run. Then the Cavs split the first two games of the CWS Finals against Vanderbilt. The decisive third game was tied 2-2 in the eighth inning, when Vandy’s Johnny Norwood hit a solo homer to lift the Commodores to a 3-2 victory.

The 2014 Cavs were stacked with talent, led by five future first-round picks (including major leaguers Derek Fisher and Matt Thaiss). Led by Fisher, Mike Papi, Joe McCarthy and Branden Cogswell, this was an athletic team that also had power potential, though it thrived off driving the gaps and racking up doubles in the dead-offense era of the early BBCOR days. But pitching and defense proved to be the strength of this club, led by first-team All-American Nathan Kirby, fellow lefty Brandon Waddell, future big leaguers Josh Sborz and Artie Lewicki, and flame-throwing first-rounder Nick Howard. Virginia finished second nationally with a 2.23 ERA, and fourth nationally with a .981 fielding percentage.

How They Match Up: Both of these teams were elite run prevention outfits, as both ranked in the national top five in ERA and fielding percentage. They competed in vastly different eras and played their CWS games in dramatically different conditions, but Virginia would actually have been well suited to mash when necessary in 2002, and Texas would have had no trouble adjusting to the pitcher-friendly conditions of 2014. So these teams are really mirror images, both built to succeed in a variety of conditions. Had Virginia been able to win that final game in Omaha, this team would have been seeded much higher — but a Norwood solo homer in the eighth inning proved to be the difference between immortality and almost-immortality for these Cavs. Nonetheless, Virginia is a dangerous opponent here.

Both @TexasBaseball and @UVABaseball were elite run prevention outfits, as both ranked in the national top five in ERA and fielding percentage. Who walks away with the win?

〈
Previous Article CWS Top Teams Bracket: 2000 LSU vs. 1999 Florida State
Next Article Off The Top Of My Head: The Omaha Edition
〉