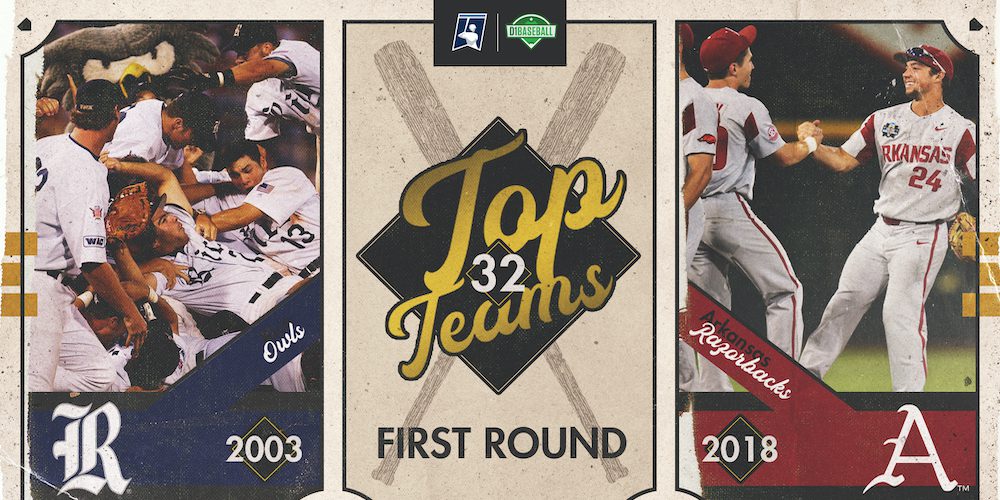 Rice had experienced a wealth of success under legendary coach Wayne Graham well before this season, but 2003 is when all the pieces finally came together for a national title. The Owls had an incredible regular season and made easy work of the first round of the NCAA tournament with a trio of wins over McNeese State and Wichita State (twice). The Owls then faced crosstown rival Houston in the Super Regional round, where they lost to the Cougars in the series opener before scoring 15 runs the final two games to advance to the College World Series.

Once in Omaha, the magical ride continued for the Owls. Rice defeated Missouri State (then Southwest Missouri State) before beating in-state rival Texas twice to advance to the CWS Finals against Stanford. Rice won the series opener in extras, lost to Stanford and then won 14-2 in the series finale to take home the national crown.

The Owls stood out amongst the rest during their CWS run. For instance, Rice led the field with a .279 average, which was just a hair ahead of Stanford. However, the Owls crushed everyone else on the mound with a 2.83 ERA. Stanford, which finished second in the pecking order, had a staff ERA of 4.27, followed by Texas at 4.33. Enrique Cruz Jr. and spark plug Chris Kolkhorst each finished the Omaha run with batting averages well north of .300, while on the mound, stud reliever David Aardsma didn’t allow a run in four appearances, and the Big Three of Jeff Niemann,  Philip Humber and Wade Townsend all succeeded during the run to the national title. It’s worth mentioning that Niemann, Humber and Townsend were all first-round picks with Humber going No. 3 overall, Niemann No. 4 overall and Townsend No. 8 overall. What a rotation and what a season for the Owls.

The Hogs were so close to winning the program’s national title this season, they could literally taste it with one out to go in Omaha. We know how the rest went here, but let’s not rehash that too much, right Razorbacks fans? The Hogs put together a strong regular season that year, going 18-12 in the SEC, which was good enough for a three-way tie in the conference standings. Arkansas scored 20 runs in its first two games of Regional action against Oral Roberts and Southern Miss before edging Dallas Baptist, 4-3, to advance to the Super Regional round. There, the Hogs beat South Carolina two of three games to advance to the College World Series.

Once in Omaha, the Razorbacks went on a wild ride that ended with what could best be described as drama. The Hogs defeated rival Texas, 11-5, to begin their CWS run before beating Texas Tech and defeating SEC foe Florida, 5-2, to advance to the CWS Finals. The Hogs defeated Oregon State 4-1 to begin the Finals before getting one out away from winning the program’s first national title. Then the whole foul ball thing happened.

Though Arkansas’ run ended in heartbreak, it was truly a season to remember. The Hogs finished the CWS that year fifth in terms of team batting average, while finishing third in pitching staff ERA behind Oregon State and Florida. Casey Martin and Dominic Fletcher each hit well over .300 during that run to the CWS Finals, while on the mound, wiry righthander Blaine Knight continued his legendary status with two excellent starts and a 2.45 ERA in 11 innings, along with 10 strikeouts and two walks.

Arkansas proved that winning the national title can be incredibly difficult. They fell short of that goal that season, but that crown will head to Fayetteville at some point in Dave Van Horn’s career.

How They Match Up: This Rice team will go down as one of the best championship clubs ever, thanks to the Big Three of Niemann, Townsend and Humber, along with stud reliever Aardsma. But I love so many aspects of that team. From Jose Cruz Jr., to one of my personal favorites in Kolkhorst, the Owls were an exciting club that didn’t seem to have a weakness. As for the Hogs, there’s no doubt the lineup could matchup with the Owls. The Hogs had a deep lineup loaded with power, while on the mound, Blaine Knight, Isaiah Campbell and Matt Cronin were the headliners. Arkansas has a formidable set of arms, but it doesn’t stack up with the Owls here.

This @RiceBaseball team will go down as one of the best championship clubs ever, thanks to the Big Three of Niemann, Townsend and Humber, along with stud reliever Aardsma.

Who do you think takes the dub?