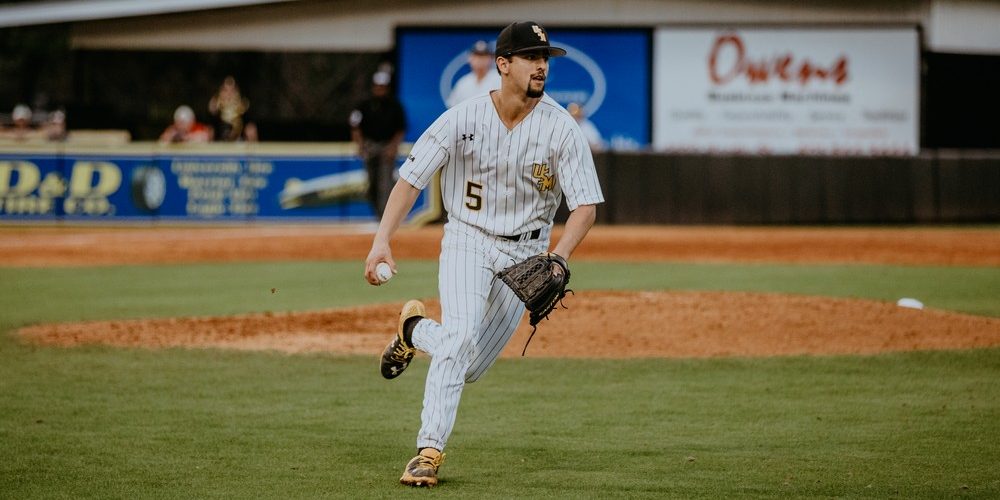 HATTIESBURG, Miss. — Up, down, under. Nick Sandlin was all over the arm side of the Pete Taylor Park mound Friday. The Southern Miss righthander varied his arm slot and velocity, and simply baffled Mississippi State in the Golden Eagles’ 11-0 victory.

Sandlin worked a career high seven innings in his first collegiate start after serving as the team’s closer much of the past two seasons. After combining for 20 saves in two seasons and winning 10 games out of the pen a year ago, he allowed only four hits and was in command throughout his 93-pitch outing. The junior struck out nine Bulldogs and did not walk a batter. He really only struggled in the third inning when he allowed three consecutive hits, all with two outs. He rebounded the retire 13 of the next 14 hitters.

“He is a grinder, he was a bulldog out there,” said USM designated hitter Matthew Guidry. “Well, not tonight, he was a competitor out there,” as the he reconsidered comparing his pitcher to the opponent’s mascot.

“We wanted him to set the tone and he did,” said USM assistant Chad Caillet who filled in the suspended Scott Berry. “He filled up the zone. He is tough to hit. We struggle hitting him in intra-squads. We really do. He can throw from different angles and come over the top. He was predominately a fastball, slider guy when he got here. He has developed a change-up and that has got him over the hump to be a starter.”

Sandlin also had 10 groundouts as MSU hitters only elevated two fly ball outs. His delivery was deceptive as he would make most of his pitches from a three-quarters arm slot but slide them up or down to over-the-top and also submarine.

“He will pitch anywhere from 85-92 MPH depending on the arm angles,” said Caillet. “It is really tough as a hitter when you can’t gauge speeds and guess locations.”

“I learned the sidearm stuff to go with what I used to be able to do, come over the top and a little to the side,” Sandlin explained. “I try to mix that in. Show them, even if it is not a strikeout pitch. In the past, I have only done for a strikeout, maybe once or twice an outing. As a starter I will do it more. I worked on it a lot this summer. ”

Sandlin said his changeup is a different pitch from different slots as is breaking ball while the fastball is mostly the same. Over the top, he uses a two-seamer that he tries to elevate and will sometimes throws a four-seamer. Then he has a curve ball and a circle change he can throw as well. From sidearm, he uses a sinker, slider and a splitter.

“I put a glove up and he will hit it,” said his catcher Cole Donaldson. “It gets a little tricky with the armslots. We communicate when he is going to change (release points). We don’t want to cross me up. Sandlin is smart and has a good baseball IQ. I see that guy going to the league one day.”

The Southern Miss victory helped soothe a little of the offseason bitterness of losing their home regional to the Bulldogs last June. Berry’s suspension came from an ejection in the regional final. The USM coach got to enjoy this one as his club cruised to an easy victory.