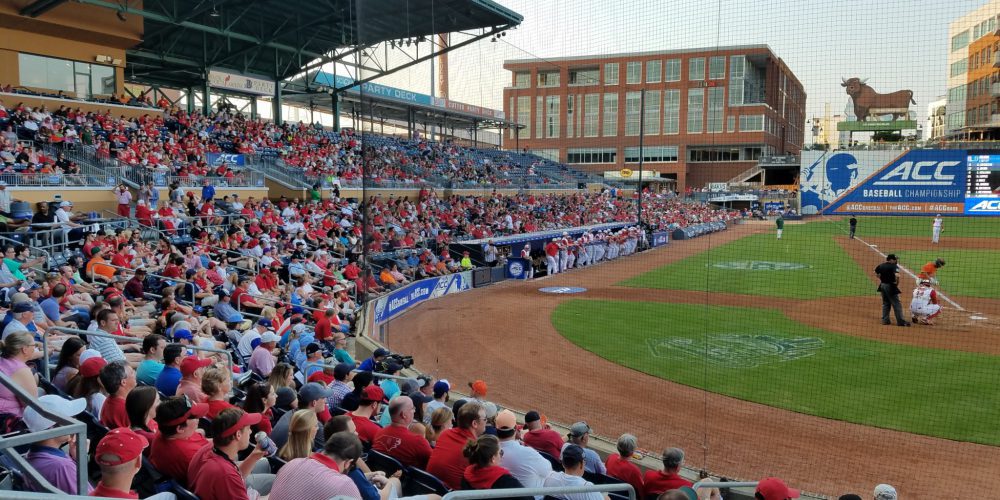 Two days after the NCAA announced it will move all seven of its scheduled championship events out of North Carolina as a result of the state’s controversial anti-LGBT HB2 law, the ACC followed suit. The conference, which is based in Greensboro, announced that it will relocate all eight of its neutral-site championships that had been scheduled in North Carolina for this academic year. That includes the ACC baseball tournament, which has been held at Durham Bulls Athletic Park for five of the last seven years and was slated to remain there through at least 2018.

“As members of the Atlantic Coast Conference, the ACC Council of Presidents reaffirmed our collective commitment to uphold the values of equality, diversity, inclusion and non-discrimination,” the ACC said in a statement. “Every one of our 15 universities is strongly committed to these values and therefore, we will continue to host ACC Championships at campus sites. We believe North Carolina House Bill 2 is inconsistent with these values, and as a result, we will relocate all neutral site championships for the 2016-17 academic year. All locations will be announced in the future from the conference’s office.”

While disappointed to lose the 10-team tournament (and the accompanying revenue generated for the community by the event), the Durham Bulls expressed support for the ACC’s stance.

“Our partners at the Atlantic Coast Conference had a difficult decision to make regarding the location of neutral site championships throughout the state of North Carolina,” the Bulls said in a statement. “We understand the conference’s position, and support our partner’s decision to remove those championships from North Carolina. We look forward to a resolution of this issue, so that we can welcome the tournament back to Durham in future years. We have opposed House Bill 2 from the beginning, and continue to share that sentiment.”

Even Duke baseball coach Chris Pollard, whose team has hosted the ACC tournament on its home field (the DBAP), agreed that the ACC did the right thing, even though he said it was “a huge blow” to Duke baseball.

“It’s disappointing. It’s kind of a sad day for the ACC and it’s obviously disappointing for us and the folks here at the DBAP. But I would also say we fully support the ACC’s decision,” Pollard told D1Baseball. “It was a good and necessary move on their part. We’d love to be playing the ACC tournament in Durham, in our home ballpark and in front of our hometown fans. But the ACC did the right thing and Duke baseball supports them, and I know the Durham Bulls have been very clear in their support of the decision the ACC has made. So everybody’s behind the decision and in lockstep with how we feel about this whole thing.

“It’s sad, it’s embarrassing. I echo what Coach K said: It’s embarrassing. ‘Disappointing’ and ‘embarrassing’ are the two best descriptors I saw to describe this whole thing. It’s head scratching, it really is. I applaud folks who are taking the necessary steps to apply pressure, to exact change. But how much has to happen before common sense prevails?”

HB2 is also causing scheduling headaches for North Carolina teams, because five states have banned public employees from traveling to North Carolina. New York’s travel ban forced Stony Brook to cancel its series at UNC and Binghamton to cancel a series at NC State. The Tar Heels got lucky, replacing the Stony Brook series with a set against Long Beach State. And the Wolfpack replaced Binghamton with a season-opening road trip to Hawaii. Pollard said Duke’s baseball team has not had any cancellations, although the school’s basketball team did.

So where does the ACC tournament go next? Depending upon the schedules of minor league clubs, there are plenty of options. It could return to Jacksonville, where it was held from 2005-08. That location draws good fan support from Florida State fans and is a reasonable drive for Miami and Georgia Tech fans, but it’s far from a central location for a league that stretches from Boston to Miami and as far west as South Bend, Ind. Still, Jacksonville must be considered one of the front-runners.

There was talk of Myrtle Beach hosting the event several years ago, and that seems like another strong possibility. The Norfolk Tides have already expressed interest in hosting it; the Tides are traveling during the ACC tournament, and the Tidewater region is an easy drive for plenty of ACC programs. That option makes a lot of sense.

The ACC nearly held the event at Fenway Park a while back, but that option is not available because the Red Sox are home during the ACC tournament next year. Likewise, Greenville’s Fluor Field is already booked for the Southern Conference tournament, so it is not an option.

But there’s no shortage of minor league venues to choose from in the ACC’s vast footprint. Charleston, Columbia, Gwinnett County, Richmond … maybe even Turner Field (the Braves will move into their new ballpark in April). It should not be difficult for the ACC to find a willing partner ready to step in for the Bulls.

Pollard pointed out that the Bulls invested a lot of resources into bringing the event to Durham, where it was a real success. Someday, when HB2 is finally repealed or overturned in the courts, here’s hoping the tournament will return to the Bull City.

“The Durham Bulls do a great job of everything they do,” NC State coach Elliott Avent said. “(Bulls owner) Jim Goodmon and those people are such professionals, they’re such good business men, and they have such a pulse for the Triangle area and for college baseball. They were so committed to it. I know they’re disappointed. But they did a great job.”