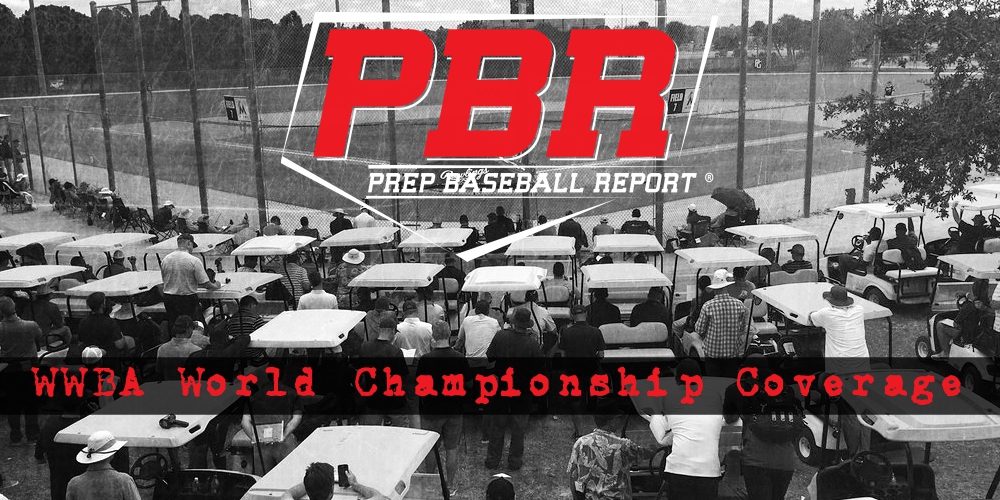 If by chance Owen White (Jesse C Carson HS, NC) had fallen out of the conversation as one of the top right-handed pitching prospects in the 2018 draft class, the highly athletic 6-foot-3, 175-pounder provided a friendly reminder Thursday afternoon that, indeed, he should be right there near the top of the list.

White delivered a near flawless performance for the South Charlotte Panthers in his complete-game shutout of a talented Rawlings National Scout Team. White struck out 13 without issuing a walk, and allowed only one hit – a double to Tennessee recruit Sean Guilbe (Berks Catholic HS, PA) – in the second inning.

Ranked No. 27 in the PBR Draft 100, the South Carolina recruit was in complete command of his four-pitch arsenal, pumping 74 percent strikes during his 87-pitch masterpiece. He came out the gates firing easy 92-mph fastballs throughout the first inning, topping at 93. He settled in the 88-90 range when he began to shuffle his polished arsenal with more regularity.

Aside from his easy velocity, White’s command of his secondary stuff is the separator in an event loaded with big fastballs. His slider – sharp and tight with a 2700 spin rate – ranged between 77-81 mph, and it served as a putaway pitch. He also mixed in a mid-70s curveball that showed more depth, while keeping hitters honest with an advanced 81-84 changeup coming out of the same window and similar fastball arm action.

His arm is clean and highly athletic, repeats his delivery well, and has a calm, easy demeanor on the mound.

• 2018 RHP Simeon Woods-Richardson (Kempner HS, TX), who’s ranked No. 24 in the PBR Draft 100, started the game for the Texas Scout Team Yankees and didn’t disappoint. The 6-foot-3, 210-pound Texas recruit threw a high volume of strikes with his fastball-slider combination. His slider is a true out-pitch, commanding it at 74-77 mph. His fastball sat 91-92, touching 93, in the first inning, and settled in at 89-91 for the remainder of his four-inning stint against Nelson Baseball School. He allowed three hits, one run, struck out four with no walks during the Texas Scout Team’s surprising 2-0 defeat.

• 2018 Micah Dallas , a 6-foot-2, 207-pound Texas Tech recruit, pitched in relief for Rawlings National Scout Team and was nothing short of dominant. Dallas has a long draw in the back and creates wicked heavy sink with his 90-91 mph fastball. Then he put away hitters with a hard, lateral 82-84 mph slider that had late dive. His slider is a true swing-and-miss offering at the next level. Dallas struck out four with no walks in three innings, surrendering one hit while throwing 22 of his 27 pitches for strikes.

• 2018 RHP Aidan Maldonado (Rosemont HS, MN) put scouts on high alert early on as the Reds Midwest Scout Team upended a loaded Team Elite Prime squad, 6-3. The 6-foot, 175-pound Illinois recruit came out hot, topping at 94 mph, and sitting chiefly at 92 in the first inning. He came back down to earth a tad, working in the 87-91 range in his three-inning stint in which he struck out three, walked two and yielded two earned.

• Following Maldonado was RHP/SS Tanner Kohlhepp (Eau Claire Memorial HS, WI), a lanky 6-foot-3, 180-pound Tennessee recruit. Working from a 3/4 slot with long arms, Kohlhepp topped at 93 mph, but pitched mostly at 87-91 in his two innings. Erratic at times, his 77-80 slider flashed sweeping late action with a spin rate of 2786. He didn’t work the cleanest of two innings – surrendering two hits and one walk – but with his athleticism and slot, Kohlhepp has tantalizing upside.

• RHPs Jack Anderson(Jesuit HS, FL) and Franco Aleman (Alonso HS, FL) to the hill for FTB/Giants Scout Team in the nightcap. Anderson pitched three innings, allowing just one run on just two hits and a walk while striking out four. The lone blemish came on a home run off the bat of 2021 1B Blaze Jordan (DeSoto Central HS, MS), who went down and got a curveball. OF Isaiah Thomas (The Benjamin School, FL) nearly robbed Jordan with a spectacular catch over the wall, but it went off his glove. Aleman logged two innings of relief and allowed two hits while striking out four.

Anderson sat 89-92 mph early, settling in at 89-90, with finish to his fastball. It comes out of his hand well and gets on hitters quickly, causing a lot of swings and misses. He also has a wipeout slider at 77-80 and flashed a breaking ball with more depth at 76. He is committed to Florida State. Aleman, a Florida International recruit, has a tall, long frame at 6-foot-6, 200 pounds and comes through a high-3/4 slot with a long arm action. His fastball has above-average arm-side life and ranges from 87-92, sitting mostly 89-90. He also showed the ability to spin a curveball that was sharp at times at 75-77. It flashed 11/5 shape and depth.

• RHP Chase Costello (Pompano Beach HS, FL), a Louisiana State recruit, had a strong outing at the Florida Diamond Club Showcase last weekend, so he attracted a strong crowd of scouts for his start with the Toronto Blue Jays Scout Team. This outing wasn’t on par with last week, but his upside is still evident. He has an athletic, projectable frame and flashed some sink to his fastball at 87-90. He shows solid feel for a changeup at 79-81 and mixed in a slider that had tight break at times. It sat around 80. He allowed an unearned run on four hits and three walks while striking out three.

• One of the highly anticipated starts on the day was RHP Seth Halvorsen (Heritage Christian Academy, MN), who took the mound for the Minnesota Blizzard against the East Coast Sox Select. Halvorsen was solid, though the numbers didn’t speak to that. In four innings of work, he allowed six runs, but just one was earned. He surrendered five hits and a walk while striking out two. Halvorsen’s first two pitches were 95 and 94, but he pitched at 91-92 and was 88-91 by the third inning. His fastball had heavy life, inducing weak contact and he went between two breaking balls—a curveball with sharpness and depth at 74-75 and a slider at 80-81.

• 2018 INF Jared Poland (Cathedral HS, IN), a Louisville recruit, is one of the more physical infielders in the class, and looks like he may have a chance to be a true, offensive second baseman in the future. The 6-foot, 190-pounder played second base, where he moved around with his usual athletic actions. What separates Poland from other second/third baseman is his ability to handle the bat. He blasted a deep double to right centerfield, and has a chance to hit at a high level. The ball sounded different off his bat as his quick hands ripped through the zone.

• 2018 C Hayden Jones (Carroll HS, IN), a Mississippi State recruit, looks even more physical than he did in the past, and the swings from the 6-foot, 200-pound catcher exhibited that new strength. The left-handed hitter laced a line drive slightly right of centerfield, and stretched it into a double to showcase his athleticism. He is an above average receiver with a strong arm, and demonstrates the ability to lead a pitching staff.

• 2018 INF Bryce Reagan (IMG Academy, FL), a Texas recruit, didn’t have the results at the plate, but showed balance and quick hands from both sides. He did, however, make his presence felt on defense where he went deep in the hole at shortstop before firing a strike to first base while throwing against his body going towards the left field line. It was a fantastic play, and put the 6-foot-2, 190-pound, proportionally built infielder’s athleticism on full display for North East Baseball.

• 2018 CIF Grant Lavigne (Bedford HS, NH), a Wake Forest recruit, looks like he may be the next in what is becoming a trend of big, physical power hitters to head to Winston-Salem, and have success. At 6-foot-4, 230-pounds, Lavigne is a presence in the box hitting from the left side. He had multiple good at-bats on the day, and his ability to allow his barrel to lag in the zone while driving the ball to the opposite field stood out.” />+ Uncommitted LHP Destin Dotson (Scotlandville Magnet HS, LA) stands tall on the mound at 6-foot-7, 225-pound, and with his long stride to the plate and long limbs, he seems to be on top of the hitter when he releases the ball. He ran his fastball up to 90 mph from a higher ¾ slot as he struck out five batters in two innings of work. His breaking ball is currently more of an average pitch with 2/8 break, but shows promise of becoming better in the future. The big left-hander has a longer arm swing with quick hand speed out front as he remains, fairly, linear down the mound.

• OF Nick Decker (Seneca HS, NJ) showed off why he is one of the better power threats in the 2018 class as he smashed a two-strike triple off the right field wall in his first at-bat. The proportionally built, muscular 6-foot, 195-pounder fouled off some tough pitches before sending the ball flying to the wall. His hands flow freely back in sync with a short stride before his barrel works flat through the zone showing lag and power with a loose finish. He would later double in the game to round out an excellent day.

• The 6-foot-1, 205-pound 3B Brandon Howlett (George W. Jenkins HS, FL) looks stronger than he did last year, and his frame appears to have matured even more. In his first at-bat, Howlett sent a 90 mph fastball off  the left field scoreboard for a home run. Howlett is gifted with advanced quickness in his hands, and his strong lower-half allows him the foundation with which to drive the ball. His final at-bat of the day was the most impressive as he fell behind early after fouling balls straight back, but worked his way to a 3-2 count, and proceeded to stroke and outside fastball for  a line drive single to the opposite field.

• The long, athletic RHP Cole Winn (Orange Lutheran HS, CA) picked up right where he left at last year’s event, and showcased his dominant stuff over three innings. The 6-foot-2, 195-pound right-hander looks even taller when standing high on the mound as his arms and legs seem to go on forever. He athletically repeats and uptempo delivery that remains compact down the mound before his whippy arm goes through a medium-sized arm swing. Winn’s fastball jumped out of his hand at 91-93 and peaked at 94 mph as he showed command of it to both sides of the plate. The pitch, also, featured some arm side run at times. His slider had wipeout capability at 78-81, and he was able to throw it early in counts for strikes while getting it in and out of the zone late when ahead. More intriguingly, Winn demonstrated advanced feel for his changeup at 83-84 with fading action and fastball arm speed. Winn’s electric stuff had the large collection of scouts whispering about the exciting possibilities of what he may one day become.