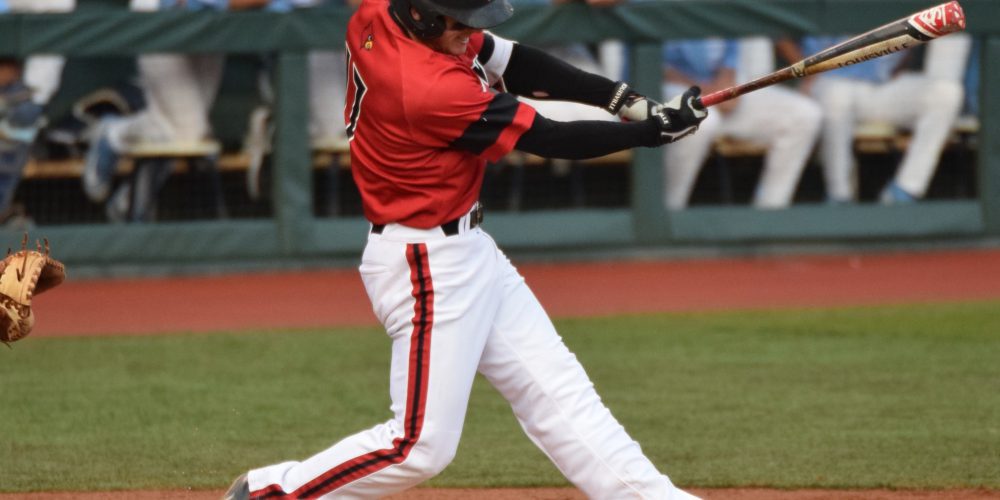 Dan McDonnell’s Cardinals seem to be finding their stride these days. The Cards went on the road last weekend and captured a road series win over North Carolina, and shined again on Tuesday night with an 8-5 road win over Vanderbilt.

The key in this game was UL getting off to a hot start offensively, scoring four runs in the second inning, with the big play of the inning coming on a Drew Ellis three-run homer. Vanderbilt made a little rally late in the contest with Ethan Paul hitting a three-run homer of his own, but it wasn’t enough to lead the Commodores back.

Louisville’s Nick Solak also hit a home run in the contest a two-run job as he finished the contest 3-for-4 with two RBIs, while Brendan McKay and Corey Ray each had two hits.

The Cougars hoped to respond in kind from a tough series loss to Pepperdine this past weekend. Well, they accomplished that goal in impressive fashion, pummeling Utah Valley 17-6 on the road.

Urry had a huge night at the plate, going 3-for-5 with a pair of homers, two runs scored and five RBIs, while also drawing a walk.

Upset of the day: Jacksonville over Florida State

The Dolphins have quietly put together quite an impressive season and they bounced back from a tough series loss to Kennesaw State over the weekend with a 6-2 home triumph over the Seminoles.

Jacksonville shortstop J.J. Gould went 3-for-3 with a double to lead the offensive charge, while the most impressive aspect in this one was the start put together by JU’s Jeff Tanner, who struck out three and allowed just a run on six hits in six innings to improve to 3-0 on the season. For the Seminoles, starting pitcher Andrew Karp allowed three runs on two hits in just an inning of work.

With the win, JU’s RPI improves to 53 and this team could, emphasis on could soon to get into the at-large discussion as the Atlantic Sun tournament looms in the horizon.

HOUSTON SCRATCHES RICE: The season hasn’t gone as planned for the Cougars with an RPI in the 90s and highly unlikely to make the postseason at this point without winning the AAC conference tournament. However, Todd Whitting’s club helped the coach notch win No. 200 on Tuesday night with a 10-0 throttling of crosstown rival Rice on the road. UH young starting pitcher Trey Cumbie struck out five and allowed just five hits in eight shutout innings, while the offense banged out 12 hits with Corey Julks tallying two hits and three RBIs and second baseman Josh Vidales collecting three hits and knocking in two runs. On a side note, Rice pitchers walked 13 Cougars on the night, with All-American candidate and righthander Glenn Otto walking five in 1.1 innings.

ARIZONA STATE WINS AGAIN: The Sun Devils have played an impressive brand of baseball over the past few weeks and again took care of business on Tuesday with a 6-4 win over UNLV on the road. ASU’s David Greer led the charge at the plate, going 3-for-4 with a home run, four runs scored and three RBIs.

COWBOY MAGIC: Oklahoma State is in the mix for a regional host site and the Cowboys picked up a huge 8-7 home win over Dallas Baptist. The Cowboys were down just a run in the bottom of the ninth inning when Jon Littell hit an RBI triple to tie the game. OSU won the contest in the 11th when Corey Hassel hit a walk-off RBI single up the middle. Lefthander Garrett Williams started for OSU and allowed four runs on three hits in four innings, but the offense took care of business with Collin Theroux collecting two hits and knocking in four runs.

HERE COMES CLEMSON: Remember those Tigers, who were taking the college baseball world by storm earlier this season? Well, they appear to be back, taking back-to-back series from Florida State and NC State, while also crushing Charleston 13-4 in midweek action. Clemson banged out 15 hits in the victory with leadoff hitter Chase Pinder going 2-for-5 with a double and four RBIs, while Chris Okey knocked in a pair of runs. Clemson’s conference record is the only thing holding it back from a host site and being in the running for a national seed at this point.

TAR HEELS JAIL PIRATES: North Carolina dropped a tough home series against Louisville over the weekend, and really needed to bounce back with a midweek win over a quality RPI team like East Carolina. Well, the Tar Heels got exactly what they needed in a 9-1 victory. North Carolina used four pitchers in the win, with righthander A.J. Bogucki striking out three in 4.1 shutout innings, while Tyler Ramirez led the offense with a home run, double and two RBIs, and shortstop Logan Warmoth had three hits and two RBIs.

HAPPY HOOSIERS: There’s no doubt Chris Lemonis’ club has some serious work to do RPI-wise over the next few weeks to make the postseason, but this team is making things mighty interesting, grabbing a 3-2 win over Kentucky at home, with the game-winner being a walk-off RBI single from Laren Eustace in the bottom of the ninth inning. IU used four pitchers in the game, with Luke Stephenson and Thomas Belcher each tossing two shutout frames. With the win, IU is now up to 94.

TOP-RANKED TAMES BULLS: Florida continues to rack up impressive wins, and it took care of business on Tuesday with an 11-4 win over South Florida. UF first baseman Peter Alonso went 3-for-4 with a double and three RBIs.