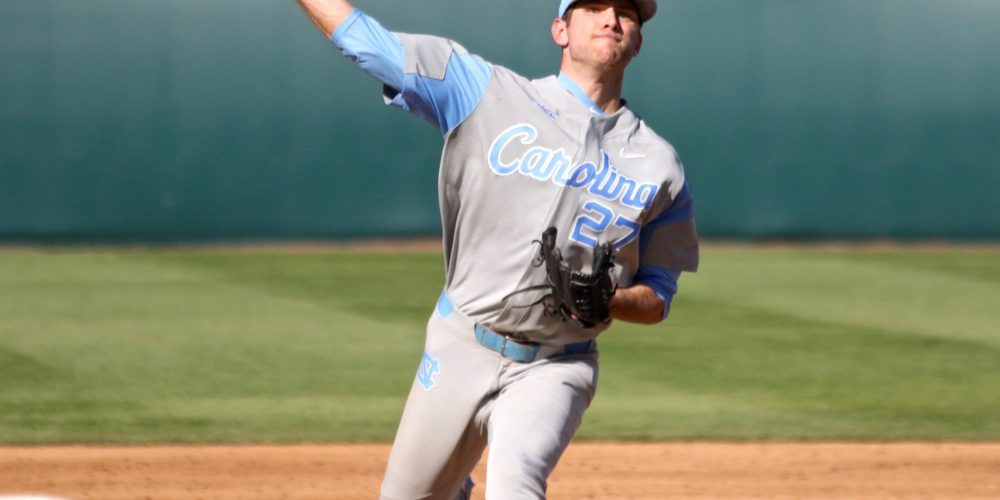 North Carolina has quietly gotten back on track in midweek play after scuffling on weekends over the last month. The Tar Heels scored 19 runs in midweek wins against UNC Wilmington and Campbell last week heading into their exam break, and they kept it going with an 11-0 throttling of Atlantic-10 leader VCU on Tuesday. Brian Miller, Tyler Ramirez, Logan Warmoth and Brandon Riley combined for nine hits and nine RBIs to lead UNC’s 15-hit barrage in support of Jason Morgan (6 IP, 4 H, 0 ER). UNC seems to have some momentum heading into a huge series this weekend against Louisville.

Upset of the Day: EKU over Kentucky

In his first year as head coach at Eastern Kentucky, Edwin Thompson has already led the Colonels to as many wins as they recorded all of last season. EKU isn’t very deep on the mound, but it has a powerful offense and has proven capable of knocking off quality teams during a 21-25 season. On Tuesday, the Colonels knocked off in-state power Kentucky 5-4, giving them their second win this season against an SEC opponent (they also beat Mississippi State earlier this year). Wrecking ball third baseman Mandy Alvarez had two more hits and an RBI to lead the offense for EKU, which got six innings of one-hit, shutout relief from Chris Cervantes. Alvarez is now hitting .396/.438/.635 with 10 homers, 13 doubles and 49 RBIs. He’s got a shot to make a run at All-America honors at third base.

The loss is a significant setback for Kentucky’s at-large hopes, as it dropped the Wildcats 12 spots to No. 54 in the RPI. The Wildcats have also lost three straight weekend series — including back-to-back series against two teams not projected to make regionals, Arkansas and Auburn. UK needs to reverse its momentum with a home series win against South Carolina this weekend.

• Sam Houston State is hanging around the periphery of the at-large race, and a 4-0 win Tuesday against Houston will help the Bearkats’ case. Freshman righty Riley Gossett improved to 5-0 with six shutout innings of work, and SHSU did all of its scoring in a four-run sixth inning to beat Trey Cumbie. Sam Houston is 17-4 in the Southland but No. 84 in the RPI, so they need some more wins like this. Houston is scuffling, at No. 79 in the RPI.

• A big reason for Louisville’s robust RPI and sterling 36-9 overall record is that the Cardinals win every midweek game — literally. They improved to 12-0 in midweek action with Tuesday’s 7-1 win against American Athletic Conference leader Cincinnati. And a big reason Louisville has won every midweek game is because it has college baseball’s best Tuesday starter in Kade McClure, who improved to 9-0 on the season with seven innings of one-run ball against the Bearcats. Will Smith, Colby Fitch and Blake Tiberi contributed two hits apiece to lead the Louisville offense.

• As we debated regional hosts late Tuesday night, Oregon State consistently came up in the discussion against the likes of Washington and others. Well, the Beavers continue to trend upward and picked up an important, 5-4 win in the 11th inning over Seattle, catcher Logan Ice getting the game-winner with a walk-off RBI double. Ice finished the contest with four hits, while Jordan Britton gave the Beavers four strong innings to start the contest.

• JJ Schwarz and Nelson Maldonado each homered in Florida’s 7-1 win against Bethune-Cookman. Scott Moss started and threw three hitless innings for the Gators.

• Julian Infante went 2-for-4 with two runs, three RBIs, a double and a triple to lead Vanderbilt’s offense in a 6-1 win against Western Kentucky. Freshman Matt McGarry started and worked three innings to pick up his first collegiate victory.

• Virginia stayed hot with a 7-3 road win at scuffling Liberty, which fell under .500 overall at 22-23. The Cavs are surging right into hosting position, with six straight wins and a No. 15 RPI. Pavin Smith and Adam Haseley had two RBIs apiece to lead the Virginia offense Tuesday, and Tyler Shambora (4.1 IP, 3 H, 0 R) picked up the win with strong relief work.

• Star catcher Austin Athmann and freshman second baseman Riley Smith had four hits apiece, and Smith added five RBIs to help lead Minnesota to a 19-7 throttling of Kansas. It was the 1,200th career win for Minnesota coach John Anderson — and all of them have come with the Gophers.

• Fresno State knocked off bubble-dwelling St. Mary’s 3-2 in an important West Coast midweek showdown. Scott Silva hit a tie-breaking solo homer in the ninth to life the Bulldogs to the victory, helping them climb nine spots to No. 62 in the RPI — back in the at-large conversation. St. Mary’s, meanwhile, dropped seven spots to No. 64.