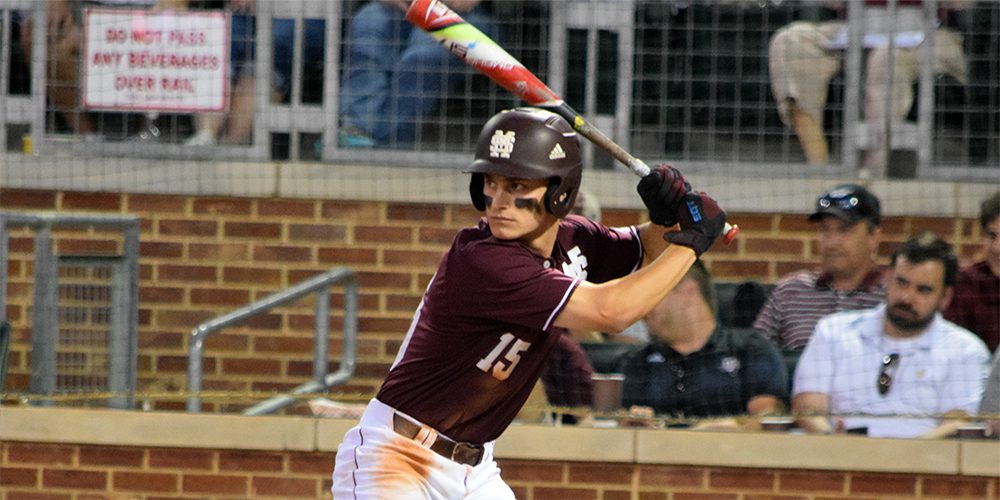 On The Mark: Super Sunday Roundup

It’s a final, 12-8 in 11 innings. Mississippi State outlasted Vanderbilt in three, wild, incredible, emotional contests. This is as good as our sport gets.

For a program like Miss State, with how their season started and how they struggled, it is quite the story of persistence to see them headed to Omaha.

The cardiac kids outlast Vandy in a Super Regional for the ages, 10-6 in 11 innings, to punch their ticket! #RoadToOmaha pic.twitter.com/MqJHHg3voM

This has been a classic

Mississippi State just broke through for four runs in the 11th and will try to hold on to that lead once again. Vandy will try to tie it to force a 12th inning, or perhaps even take the lead to end this incredible American sporting event. It has been one of the most exciting games in recent memory.

After Fullerton scored three in the ninth to take the lead, Washington tied the game to force extras. After the Titans scored one, Washington took advantage of some defensive miscues to walk off with a 6-5 victory.

Washington is… OMAHA BOUND! @UW_Baseball is headed to the #CWS for the 1st time in program history after defeating Fullerton 6-5! #RoadToOmaha pic.twitter.com/E5CvwLb1rH

Hank LoForte hits his second home run of the season and the Titans lead 5-4 in the top of the tenth.

You picked a heck of a time to hit your second home run of the year Mr. LoForte…

I don’t know what to say

Washington tied the game at four in the bottom of the ninth as Kaiser Weiss doubled and Jonathan Schiffer singled him in.  The run gets DeMers off the hook for the loss after he pitched an amazing first seven innings.

HUSKIES NOT GOING AWAY!!!
Schiffer singles to left and Weiss with wheels crosses the plate!

Mangum in the Middle, Again

Mississippi State scored three runs in the top of the ninth highlighted by Jake Mangum’s RBI single. Another run scored on a sac fly and Mangum can around to score on wild pitch. MSU is up 6-3 and three outs from Omaha.

After being handcuffed by DeMers for much of the game, Cal State Fullerton scrambled back to take the lead 4-3 in the top of the ninth on a hit batter and three singles.

Bases loaded with Commodores. Full count. A Riley Self is tapped to third by Kaiser but MSU third baseman Justin Foscue collides with Vandy runner Austin Martin. The call was runners interference to end the threat but oh, man, what a crazy series.

Duke finished off Texas Tech 11-2 to force a winner-take-all game Monday at 4 ET.

And in Nashville, Connor Kaiser whistled a line drive to right but MacNamee caught to strand another couple of runners. They are still tied at 3.

Mississippi State and Vandy are now tied as Elijah MacNamee scored on a wild pitch. This is going to be a fun finish.

Speaking of fun, Joe DeMers is having fun in Fullerton. The righty has thrown just 61 pitches in six innings of perfect baseball. The Huskies lead 3-0 in the sixth.

Vanderbilt now leads 3-2 after a two-run outburst that chased MSU starter Jacob Billingsley. They left the bases loaded however, as reliever Cole Gordon struck out Connor Kaiser to end the threat.

The Commodores have the lead and turned the ball over to closer Chandler Day in the fifth inning.

Duke is trying to close out Texas Tech leading 10-1 in the eighth.

Duke scored four in the fourth and six in the fifth and leads Texas Tech 10-1 in the sixth. A Blue Devil victory would give us a full schedule of four games Monday.

In Fullerton, Washington’s Joe DeMers is dealing against the Titans in a scoreless game.

Nine up, nine down for #Washington RHP Joe DeMers, who had been almost exclusively throwing fastballs tonight.

Mangum in the Middle

Mississippi State scored first and wouldn’t you know Jake Mangum was in the middle of it. He came through with a hit behind the runner single to advance Jordan Westburg to third who scored on a Rowdy Jordan sac fly. Mangum then scored from second on a single by Hunter Stovall.

Vandy cut the MSU lead in half on a home run by Stephen Scott. It’s 2-1 Bulldogs bottom 3.

Duke is up on Texas Tech 9-0 in the fifth inning. Blue Devil hurler Graeme Stinson has allowed just three hits in five innings.

Cal State Fullerton and Washington are just getting started at Goodwin Field.

The Blue Devils have something cooking in the third inning off TTU starter Caleb Killian. They have scratched across three runs and have a runner on second with one out.

Both Mississippi State and Vanderbilt had base runners in the first inning but are scoreless. Vandy loaded the bases but MSU starter Jacob Billingsley got a strikeout to end the threat.

The third set of games were delayed by weather but we have baseball in Lubbock and are about to start in Nashville. Texas Tech and Duke are scoreless after two innings. Duke just loaded the bases but a double play ended the Blue Devil threat. Mississippi State and Vanderbilt are set to start at 8:05 ET.

South Carolina used three home runs and received ten walks as they defeated Arkansas 8-5 Sunday to even the Super Regional series at a game apiece. The teams meet Monday at 7 PM ET to decide which team advances to the College World Series. LT Tolbert’s grand slam was the big blow while Justin Rowe and Hunter Taylor also homered. Heston Kjerstadt and Carson Shaddy homered for the Razorbacks.

One More Game in Austin

Texas beat Tennessee Tech 4-2 to set up one final game with a trip to Omaha on the line. For the Horns, Kody Clemens was the hitting star with a homer, a double and two runs batted in. Chase Shugart and Blair Henley combined to limit the nation’s leading offense to three hits. Henley, normally a starter, pitched the final three innings for the save. The teams meet at Monday at 1 PM ET for the third and deciding game.

Neither Tennessee Tech or Arkansas plans to go quietly. David Garza hit Tennessee Tech’s first home run of the Super Regionals to cut the Texas lead to 4-2 in the eighth. Arkansas got a two run home run from Carson Shaddy to cut the South Carolina lead to 7-3 in the sixth.

LT Tolbert hit a grand slam and Hunter Taylor followed with a solo homer to blow open a one-run game. South Carolina now leads 7-1 over Arkansas in the fifth. The Gamecocks are in great shape to force a game three Monday.

⚠️Grand Slam ⚠️@GamecockBasebll shows no mercy as Tolbert blasts one with the bases loaded!

In Austin, Texas leads Tennessee Tech 4-1 in the seventh inning. A Longhorn win would give us another game three on Monday.

Are we keeping score?

In a sequence reminiscent of tee-ball, South Carolina committed three errors on two plays to allow Arkansas to tie the game at 1 in the third inning. After Casey Martin reached on a throwing error, Heston Kjerstadt hit another grounder that resulted in a throwing error. Then he took third when a throw to second skipped into the outfield. Kjerstadt was later called out trying to score on a wild pitch.

Heston Kjerstad is on 3rd…

You've got to see how he got there! #RoadToOmaha pic.twitter.com/tNdfM4FXcL

Justin Rowe just smashed a Kacey Murphy pitch into the left field bleachers to get that run back. South Carolina leads 2-1 after three.

Clemens Does It Again

Kody Clemens homered, his 23rd of the season, to help boost Texas to a 3-1 lead over Tennessee Tech in the fourth. The Horns have come out focused and energized as they try to extend their season. A Clemens throwing error had allowed a run in the prior inning. Clemens got that run back.

It continues to surprise me how Clemens is getting good pitches to drive as locked in as he has been down the stretch with ten home runs in his last fifteen games.

In Fayetteville, South Carolina has a 1-0, third inning lead over Arkansas thanks to an RBI by Justin Rowe.

We will have at least one game Monday. After Florida tied the game in the top of the ninth, Luke Jarvis got the walkoff hit off of closer Michael Byrne with an RBI single to the left center to give Auburn a 3-2 win. The teams will face off one final time Monday evening at 8:30 ET. It was a well-pitched game as both teams managed only seven hits off strong pitching performances.

Auburn’s lead was short-lived as Austin Langworthy led off the ninth with a long home run to right field. We are tied at 2. Blake Reese then followed with a long fly out to the left field wall. Can Auburn closer Cody Greenhill keep the game knotted?

Langworthy launches his first homer at the Mac this season, his third overall.

Will Holland smacked a double to left center off reliever Jordan Butler to score Josh Anthony from first. Holland was 0-8 in the series prior to that at bat. Auburn is now three Gator outs away from forcing a game three Monday.

We are still tied at 1 in the eighth inning. For Auburn, their season will be decided in the next few minutes. For Florida, a win sends them back to Omaha for their fourth consecutive season. Fun stuff from Gainesville.

Florida scored first with an RBI double by Nick Howarth. Then Auburn answered as freshman Steven Williams broke up Jackson Kowar’s no-hitter and shutout with one swing. They have played 4 and half with the game tied at 1.

SEC Gets Us Started

Florida and Auburn kick off Super Sunday with yet another good pitching matchup. Heralded Auburn freshman Tanner Burns take on Florida first rounder Jackson Kowar. Yesterday’s heralded pitching matchup was one-sided as Gator Brady Singer outdueled Auburn’s Casey Mize in an easy victory. Both pitchers today are off to a good start. Burns is pitching into but out of trouble in his three innings. Kowar has shoved in his three innings thus far, striking out the side in the third.

Jackson Kowar looks particularly nasty today for @GatorsBB. Strikes out the side in the third, has yet to allow a hit, and he's hammering the strike zone: 35 pitches, 23 strikes. Stuff is electric as usual, and the command is sharp.

No score as they head to the fourth in Gainesville.

Here are the times for today’s games:

Here’s where we stand for Omaha heading into Sunday’s games: