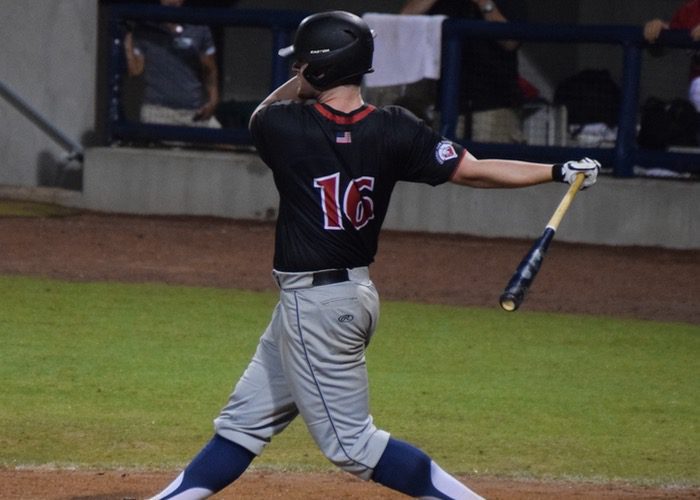 FLORENCE, S.C. — The Coastal Plain League held its 2015 all-star game and scout day workouts Monday at Sparrow Stadium, home of the CPL’s Florence RedWolves and Division II power Francis Marion. Most of the league’s best talent was on hand, with the notable exceptions of three South Carolina players (Taylor Widener, Madison Stokes and Matt Vogel) who were named all-stars but were unable to attend. Two other Gamecocks were there, however, and both made strong impressions.

Rising sophomore first baseman Alex Destino and rising sophomore outfielder Clark Scolamiero stood out as two of the top prospects in the CPL. Destino, who hit .306/.360/.476 with four homers and 29 RBIs in 28 games for the Wilmington Sharks in the CPL’s first half, showcased plus lefhanded power potential in batting practice, hitting one of the day’s deepest homers to right-center field. Once the game started, Destino delivered a sharp RBI single up the middle in the first inning, working the count to 3-2 and fouling off a number of pitches before coming through with the single. He hit a curveball to deep center field for a long fly-out in his next at-bat. Though his swing has some length that can make him prone to strike out, Destino has the strength and hand-eye coordination to emerge as a star during his sophomore year next spring.

Scolamiero was actually the highest-ranked recruit in South Carolina’s fifth-ranked recruiting class last fall (per my rankings at Baseball America), but he hit .214 in just 56 at-bats as a freshman, so his summer with the Wilson Tobs is key for his development. So far, so good: Scolamiero hit .304/.424/.344 with 16 steals in 18 tries in his first 35 CPL games. A rangy, live-bodied 6-foot-1, 180-pound athlete, Scolamiero has above-average speed and arm strength, though his throws were a bit erratic during the workout. He reached safely in both of his two at-bats during the all-star game, lining a crisp single to center field on a 91 mph fastball and drawing a walk. Like Destino, Scolamiero figures to be a key piece for the Gamecocks next year, and he looks ready to assume an everyday job in center field.

Here’s a look at some other prospects who stood out Monday: