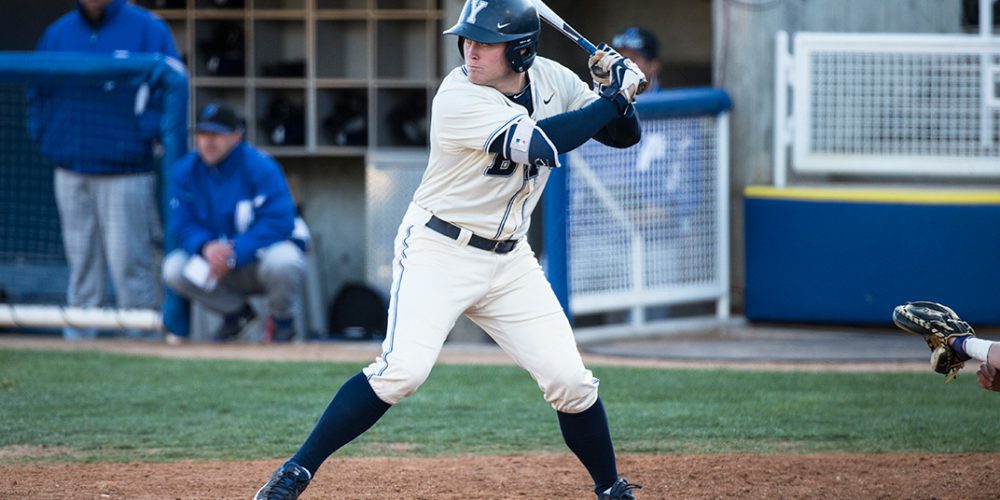 Brennon Lund is having a quality campaign for BYU. (BYU)

Under The Radar: Brigham Young

Mike Littlewood might just be the magic maker BYU needed.

Establishing a winning tradition in a state like Utah isn’t easy in the landscape of college baseball. Utah has struggled to gain traction on the national stage, and it hasn’t gotten easier over the past few seasons as a member of the Pac-12. BYU has been in much the same boat. The Cougars have the facilities and infrastructure, along with a strong national brand, to do some special things. But, it’s not until now that BYU realized its potential.

And that starts with Littlewood, who earned a stellar reputation during his highly successful stint as head coach at Dixie State (Utah) CC, where he won a national title back in 2004, while also guiding that program to four NJCAA World Series appearances.

Littlewood is in his third season with the Cougars, and while he guided the Cougars to a second place finish in the West Coast Conference back in 2013, his first season, last season was a whirlwind as his program finished the year with an overall record just above .500, but also going a respectable 16-11 in WCC play. As a result, few knew exactly what to expect from BYU this spring, but it’s been so far, very good, and pleasantly surprising, as Littlewood and the Cougars have an astonishing 16-1 overall record fresh off a midweek rivalry win over Utah.

“It feels more like my Dixie State days right now, back when we were winning national titles,” Littlewood said. “When our guys took the field back then, we expected to win, and we didn’t have to play perfect to win. That’s just the culture and mentality after you get talented guys in the program, and this team just has that mindset.

“I said it on television today that we’re not going to go 53-1, but with consistency and going about our business the right way, we’ll be just fine,” he continued. “Tomorrow is a new season, and we’ll have the same mindset as we did before. I just let those guys [players] go out there and do it.”

It wouldn’t be fair to place lofty expectations for the rest of the season on this team just yet, but their situation looks promising moving forward. In addition to such an impressive record, the Cougars sit 23 in the way-too-early RPI and have some favorable matchups coming up. For instance, BYU gets Loyola Marymount and San Diego at home early in the conference slate, while also hosting Creighton in the middle of the season. As it stands, those are all quality matchups and potential RPI boosters.

But first things first, and that’s fine-tuning all aspects of this team. What’s been the biggest reason for BYU’s climb? It’s rather simple: the offense. BYU certainly didn’t have a “bad” offense last season, but this was a team that finished the year with a .297 batting average. That’s a stark contrast to the .348 average they carry right now, which ranks second nationally behind UNC Greensboro and ahead of national stalwarts such as Texas A&M, Oregon State and Louisville.

“I would say that obviously I wouldn’t expect to be hitting near .350 as a team with a 16-1 record. Nobody expects that, but I do think I expected the approach that we’ve had offensively,” he said. “I am a little surprised at just how hard we’re putting balls into play. I’m seeing line drives all over the field up and down the lineup and there always seem to be someone stepping up from that standpoint. They’ve definitely exceeded our expectations so far.” 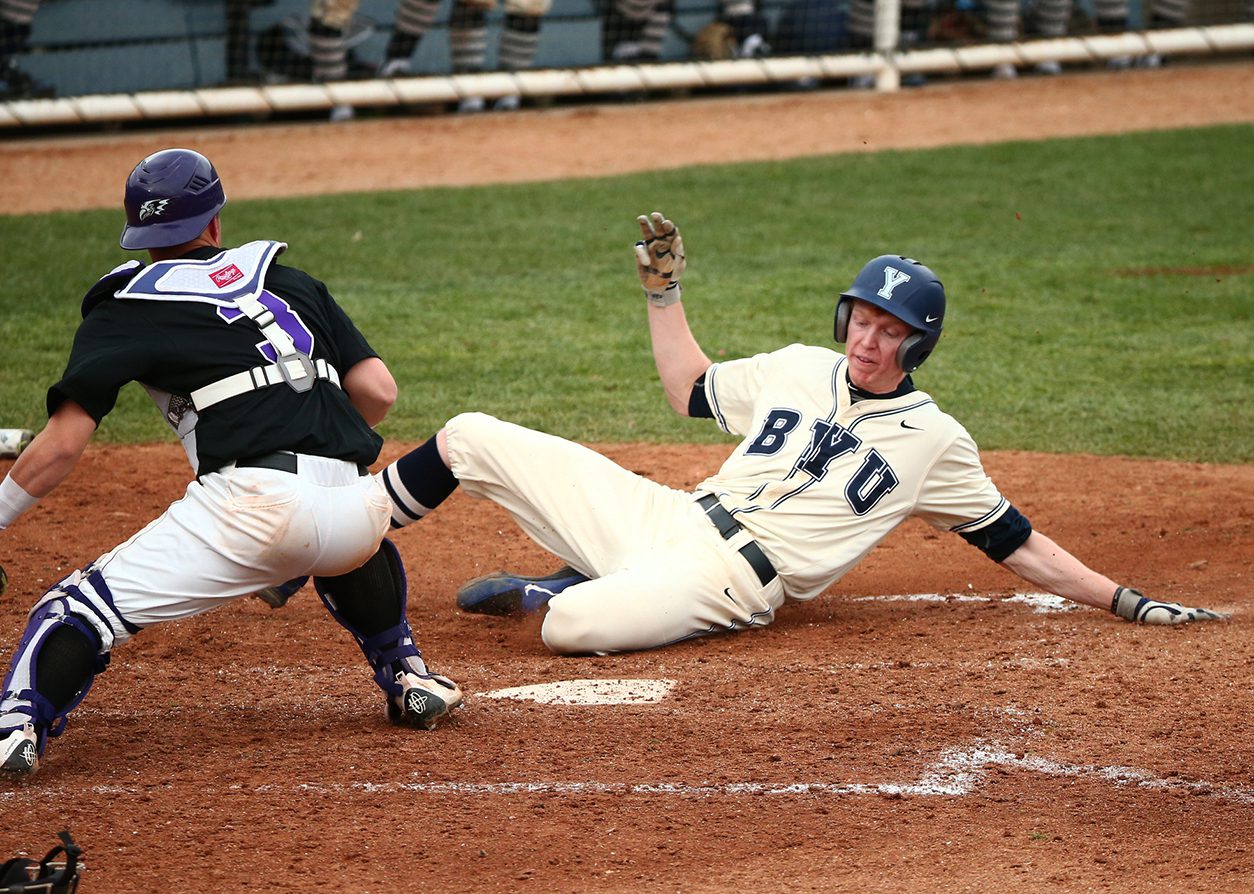 Nate Favero is having a season to remember for BYU thus far. (BYU)

BYU has so many hitters contributing at a high level, it’s tough to pinpoint where to start. But, junior outfielder Brennon Lund (.375/.477/.458) is a headliner, while hard-hitting Colton Shaver has been a big riser. The same goes for junior Tanner Chauncey (.439/.488/.469) and sophomore Nate Favero (.414/.433/.603). Second baseman Brennon Anderson, another talented sophomore on this team, also has been terrific with a .379 average, three homers and a team-best 24 RBIs. Even a first-year player such as highly touted Kyle Dean, is still producing with four homers on the year despite hitting .286, which isn’t bad, but isn’t anywhere near the top for this potent lineup, while senior outfielder Eric Urry is capping off his final campaign with some impressive numbers with a batting average above .300 and four homers, which ranks second on the team.

“Favero went on a mission and is back and he’s got some scouts comparing him to a Ben Zobrist type of player. He’s a lefthanded hitter with a quick twitch, and he’s going to be scary as he gets stronger,” he said. “Brennon Anderson has been terrific for us, and Colton Shaver has gotten himself into much better shape. He’s a fire hydrant type of player, but he has slimmed down a little bit and he has more bat speed, but hasn’t lost that power that he previously displayed. You think of Colton as a power hitter, but the more I see him, the more I think he’s a complete hitter.

“Lund got off to a great start for us and he was leading the country in hits at one point, but he’s scuffled a little bit lately.  He’s still our guy, though,” he continued. “He’s a 6.3-6.4 runner and he’s up and down right now, but in the long run, as he goes, we go. I think he’s a top-five round talent type of guy right now.”

Overall, this is a very intriguing lineup to watch with a nice blend of youth, experience, power and consistency.

“I think overall we have a lineup that can really go 11 or 12 guys deep and still put together really good at bats,” he said. “The big thing about this lineup is that we don’t give pitchers much time to breathe. In the past, we had four or five hitters, but now when a pitcher makes a mistake the entire lineup can make them pay, thus opponents’ pitch counts are rising.”

With an offense as potent as this one, the natural question is whether the pitching staff can help this club progress from one with big bats to one with balance across the board, and with the ability to make a statement on the national stage come late May and June.

That answer, for now, appears to be a resounding yes. Though it doesn’t always tell the whole story, the Cougars have a 2.88 staff ERA and have some projectable arms in the weekend rotation. No one more impressive, though, than junior righthander Michael Rucker. The 6-foot-1, 185-pounder, has a 2.59 ERA in 24.1 innings, along with 30 strikeouts and seven walks, and has some premium stuff to go with it with a fastball anywhere from 92-94, and up to 95, along with the ability to throw three pitches for strikes. Meanwhile, sophomore righty Maverik Buffo has a 3.42 ERA in 23.2 innings and will sit 89-91 with a quality changeup and good slider command, while sophomore lefty Hayden Rogers is a pitchability lefty who sits 86-89 mph with his fastball and pounds the zone. The Cougars also have an ultra-intriguing arm in 6-foot-3, 205-pound, righty Connor Williams, who likely will be relegated to midweek duties for a while, but who has a massive arm with an ability to get up to 93-96, and even 97 with his fastball, while freshman righty Jordan Wood is another power arm that could gain more innings as the season progresses. 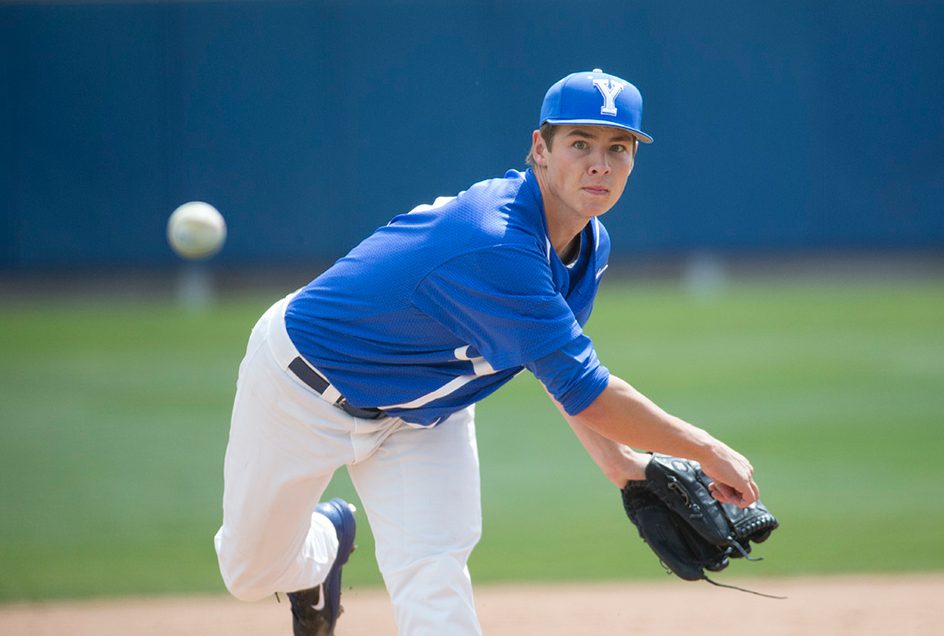 Michael Rucker is a talented prospect to watch on this team. (BYU)

“Rucker just sets the tone for us every weekend. He just throws things where he wants to and we know where the ball is going nine out of 10 times,” he said. “Maverik has been a nice surprise for us and just has a good starter mentality, while Hayden is a crafty lefty type and Wood is waiting in the wings and may very well be a starter at some point in the near future. Williams is just one of those guys that needs to prove himself in the midweek before he can get back into the weekend rotation.”

Though BYU is off to a torrid start this spring, Littlewood realizes there’s a long season ahead and consistency must be emphasized. But, it’s easy to get excited about the prospectus with this team. BYU has not reached the NCAA postseason since making back-to-back trips in 2001 and ’02, but this team looks like one that might very well help the program turn a corner.

It’s been a strenuous process for Littlewood and his coaching staff, but they’re finally able to see the fruits of their labor.