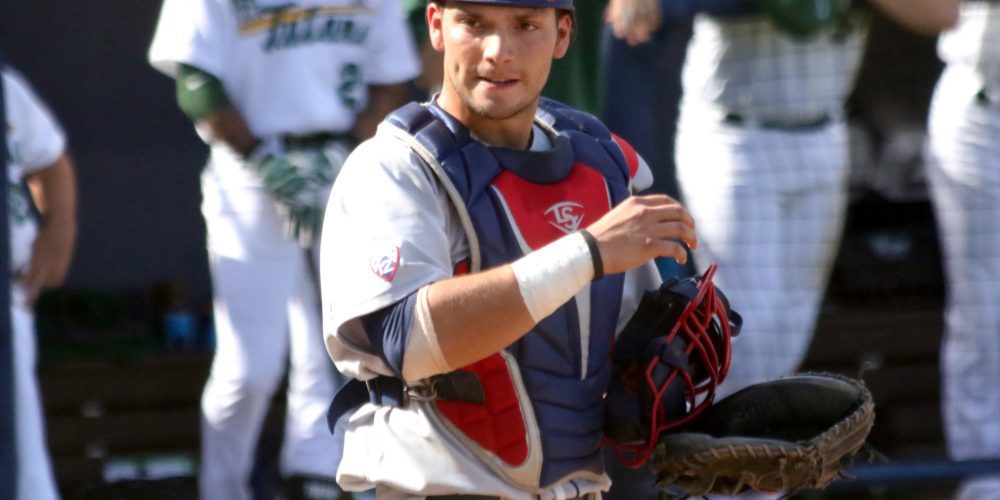 Saturday Roundup: Home is Where the Loss Is

Who knew that winning at home would be so difficult? The home team struggles continued on Saturday as home teams fell to 1-7 in super regional openers. Home teams were only marginally better in Game 2 of the Friday-Saturday-Sunday series as Texas Tech rallied for a 13th-inning win while Texas A&M won. Miami had a chance to win, but Boston College forced a winner-take-all. But the big surprise of the day and possibly the weekend happened in Starkville, where Mississippi State blew a 5-1 lead and was eliminated by Arizona.

Player of the Day: Coastal Carolina No. 6 hitter Seth Lancaster reached base five times. He was 4-for-4 with two doubles, two runs, an RBI and a walk.

Pitcher of the Day: Drew Carlton picked a good time for his first career shutout, tossing a two-hitter in Florida State’s 3-0 win in Gainesville.

Surprise of the Day: Remember how down the Pac-12 was supposed to be? It was down, but that didn’t stop the Arizona Wildcats from surprising everyone with a run through the Lafayette Regional and a clean sweep of Mississippi State in Starkville. Jay Johnson’s first season will conclude in Omaha after taking two in a row from the SEC champs on the road.

Brent Rooker had blasted two solo homers and Mississippi State held a 5-1 lead on Arizona. It looked like the Starkville Super Regional was headed to a decisive Game 3. But the Wildcats rallied. Ryan Aguilar rocked a three-run homer to right field in the eighth inning to make it a one-run game.

Arizona loaded the bases, but Reid Humphreys was able to escape with a strikeout and a groundout. He couldn’t keep the Wildcats from tying in the final at-bat of regulation. Cody Ramer doubled and scored on a Alfonso Rivas flare to left field. Two innings later, Cesar Salazar singled through the right side for a walk-off victory to send Arizona to Omaha in head coach Jay Johnson’s first year.

Cesar Salazar delivers the WALK OFF for Arizona and the celebration is on! #CWS pic.twitter.com/LiSu2V3aCO

Cameron Ming picked up the win with two scoreless innings after getting the save in the first game. Arizona’s comeback ruined a nice performance from Austin Sexton: 5.1 IP, 7 H, ER, 6 K.

For the 17th time in program history, the Arizona Wildcats are headed to the #CWS! pic.twitter.com/MrfS9xxSYG

The Cowboys broke open a 2-0 game in the ninth inning when No. 9 hitter Collin Theroux launched a three-run homer. That gave Oklahoma State plenty of breathing room even after Dom Thompson-Williams hit a leadoff homer in the bottom of the ninth. Thomas Hatch pitched seven scoreless innings, allowing just four hits before turning the ball over to Alex Cobb, who picked up a six-out save.

Buddy Reed had a two-out single in the second inning. Danny Reyes singled in the third inning, but was soon erased on a double play. That was the extent of the Florida offense. Drew Carlton shoved. He retired the final 19 batters of the game as he tossed a 115-pitch two-hitter. He struck out five.

Florida starter Alex Faedo had strong stuff, but struggled to command it with his normal precision. Florida State took a 1-0 lead on a bases-loaded, four-pitch walk in the fourth inning and Faedo was done after allowing a single to start the next inning. He struck out seven, but allowed three hits and three walks. He was charged with two runs after a Taylor Walls RBI double brought home a run. Florida State brought Walls home for a 3-0 lead when the Gators couldn’t field a sacrifice bunt. That was plenty enough for Carlton.

It’s a simple formula for UC Santa Barbara. Win Shane Bieber’s start and then split the final two games of the series. That’s how the Gauchos were able to be so successful in weekend series this year. They accomplished the first half of that equation on Saturday beating Louisville, 4-2, as Bieber went seven innings, allowing eight hits and two runs while striking out seven.

Bieber was in cruise control except against Blake Tiberi. Tiberi hit a solo homer in the second inning and drove in a run in the sixth inning. But in between, UC Santa Barbara’s duo of Clay Fisher and Austin Bush continued to have monster postseasons. Fisher had two doubles driving in one run while Bush homered in his fourth straight game. Kyle Plantier added an RBI double and the Gauchos put together three straight singles in the fifth inning to score a run. Santa Barbara turned over a 4-2 lead to Kyle Nelson, who pitched two hitless innings for his ninth save.

It's a good day to be a Gaucho! #RoadToOmaha pic.twitter.com/Nur7UbpWuL

Despite a nearly three-hour delay, the Eagles finished off a 5-3 win over Miami to even the series up. The Hurricanes took a 2-0 lead in the fourth inning on a Zack Collins homer and Jacob Heyward RBI single, but Boston College immediately answered, plating four runs with the help of two Miami errors. The Canes got a run back on a Johnny Ruiz triple in the fifth inning, but couldn’t get the tying run across in that inning or the eighth inning when they put two men on. Bobby Skogsbergh closed the door to force a winner-take-all on Sunday.

Kyle Simonds was impressive, pitching into the eighth inning while allowing just four hits and one run to force a third game in the series for the second year in a row. The Aggies hit four homers, starting with J.B. Moss’ solo shot in the first inning. Jonathan Moroney, Michael Barash and Hunter Melton all had solo shots as well.

Robert Duggar and Joe Ingle engaged in an epic battle of the bullpens as the game extended into extra innings. Ingle threw five scoreless innings, pitching around five walks by striking out six. But as soon as he came out, Texas Tech was able to push across two runs on an Eric Gutierrez’ bases loaded chopper up the middle. After the Red Raiders went ahead in the top of the 13th inning, Duggar came out for his fifth inning of work and locked down the win to force a Game 3 in Lubbock. Duggar improved to 6-0 after allowing two hits and two walks.

Big 12 Player of the Year comes up HUGE!

Gutierrez breaks the tie in the 13th with a 2-run single! #RoadToOmaha pic.twitter.com/ZuPDKFNTO4

It was sloppy at the end, but the Chanticleers picked up their first Super Regional win in program history, beating LSU 11-8 at Alex Box Stadium. Coastal Carolina’s heart of the lineup of Connor Owings, Zach Remillard and G.K. Young all homered and combined for five runs, six hits and five RBIs. Andrew Beckwith didn’t make it five innings, but Mike Morrison pitched the final three innings to lock up the win.