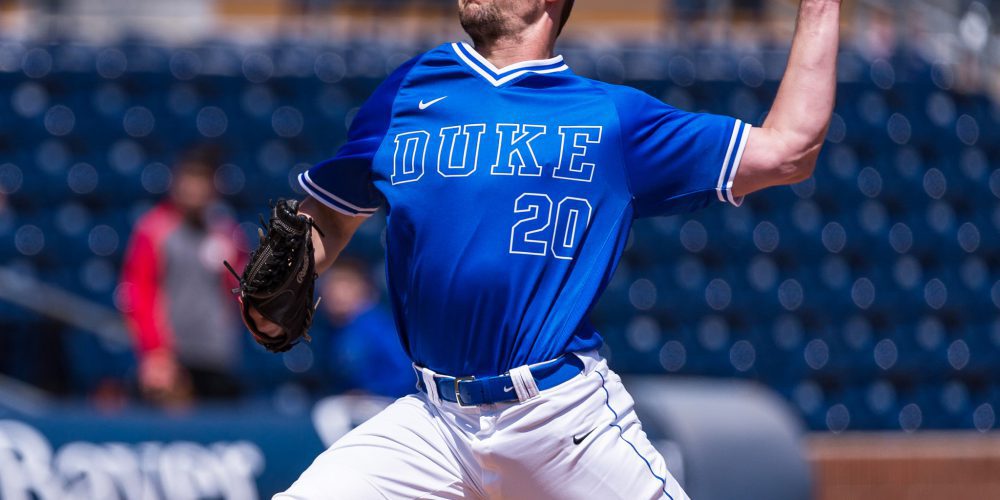 Duke had already proven it can win series against very talented opponents. The Blue Devils opened the season by taking two of three against a preseason top-10 team, Cal. They opened April with a pair of very impressive series wins on the road against Georgia Tech and at home against Clemson. They own single wins in series losses against Virginia, Miami and NC State. They’re far from a pushover.

But even so, the Devils were a heavy underdog this weekend in a series against perennial ACC heavyweight Florida State, the fifth-ranked team in the country. Duke hasn’t won a series against FSU since 1994, and the Devils haven’t been to regionals since 1961. Florida State hasn’t missed a regional since 1977, and it has won 14 regionals in the 17 years of the super regional era. And FSU ranks second in the ACC in scoring (7.7 runs per game) this year, while Duke ranks second to last in the league (4.9 runs per game). Pitching is Duke’s strength, but Florida State also has a better team ERA than Duke.

So the Blue Devils knew they needed to win this series to keep their NCAA tournament hopes alive, but few of us pundits thought they could do it. But they did it.

After taking Friday’s series opener 5-4, Duke got a strong start Saturday from fifth-year senior lefthander Trent Swart (6 IP, 6 H, 1 ER, 1 BB, 9 K) and three combined scoreless innings of relief from Al Pesto and Mitch Stallings to secure a series-clinching 3-1 victory. Jimmy Herron went 3-for-4 with a run and an RBI to lead the Duke offense. Swart’s return from Tommy John surgery has given the Devils a huge boost this year; he was one of the ACC’s most effective pitchers as a junior in 2014, posting a 1.76 ERA, and he has gradually returned to form this spring, going 3-2, 3.35 in 51 innings. His disappearing changeup has always been his best pitch, but he has also regained his feel for his curveball, and that was a key weapon for him Saturday.

“I had all my pitches pretty much the whole day,” Swart said afterward. “My curveball felt the best it’s felt all year. I was able to spot up and even when I missed, I felt I was missing down. They’re a really good hitting team, but I had my best stuff today.”

Duke climbed to No. 26 in the RPI and improved to 12-14 in the league, with four games remaining in the ACC — vs. FSU on Sunday, then at Pittsburgh. If the Devils can win two of those last four games to reach 14 ACC wins, they’ve got to feel very good about their at-large chances. If they can win three of their last four, they’re a shoo-in. And nobody saw that coming. Chris Pollard worked wonders during his days as head coach at Appalachian State, and now he’s doing the same in Durham.

We’ve written plenty this year about how impressive Mississippi State’s high-end series wins are. But Texas A&M can now rival the the Bulldogs in that category. The Aggies clinched a road series at No. 9 South Carolina with a 5-2 win Saturday, as Ryne Birk (3-for-4, 3 R, 2 RBI) powered the A&M offense and Andrew Vinson (4.1 IP, 1 H, 0 R) earned the win with sparkling relief work.

The Aggies have now won back-to-back series against top-10 opponents Vanderbilt and South Carolina. They own a road series sweep against Mississippi State and a home series win against LSU. They have lost just one series all year — when they were swept at Florida in early April. And they’re now atop the SEC’s overall standings at 18-8. In short, they are having a simply incredible season, in case anyone failed to notice.

With South Carolina, Florida State and NC State losing series this weekend, there is room for somebody else to step into the vacuum at the back of the national seed pack. And Ole Miss is taking advantage of that opportunity. The Rebels completed a three-game sweep of Kentucky — the same team that won a series from South Carolina last week — with a 7-5 win Saturday, as Tate Blackman, J.B. Woodman and Henri Lartigue combined for seven hits, four runs and five RBIs to power the Rebels to victory. The Rebels were down 5-0 after three innings, but they chipped away at the deficit and then rallied for three runs in the bottom of the ninth to win on Lartigue’s walk-off three-run homer.

Ole Miss has now won four straight SEC series to improve to 17-10 in the league with one series remaining at Texas A&M. Saturday’s win helped the Rebels climb three spots to No. 5 in the RPI, and they have high-end series wins against LSU and Louisville. As long as they can avoid getting swept at Texas A&M, they look like a solid bet for a national seed at this juncture.

In the showcase series of the week in the Pac-12, Arizona bounced back from Friday’s loss to rival Arizona State with a 4-2 win Saturday, leveling the series. Lefthander JC Cloney (7.2 IP, 6 H, 2 ER, 0 BB, 5 K) turned in a very solid start for the Wildcats, who got two doubles from Ryan Aguilar and two hits from Kyle Lewis. Arizona broke a scoreless tie with two runs in the fifth against Eli Lingos, then took control with two more in the sixth.

Sunday’s rubber game has major implications for Arizona’s hosting case and ASU’s at-large case, but both teams are in pretty good shape in those two regards. The Wildcats are up to No. 22 in the RPI and 15-11 in the Pac-12, just a half-game behind first-place Utah (which lost Saturday). The Sun Devils climbed nine spots to No. 43 in the RPI even in defeat, and they remain above .500 in the league at 12-11.

Hartford feasted on UMass-Lowell’s pitching in a three-game sweep of the River Hawks, scoring 54 runs on 51 hits over 25 innings against a staff that led the conference with a 3.70 ERA entering the weekend. Sophomore shortstop Ben Bengston had a game to remember in the opener of Saturday’s doubleheader, a 14-10 Hartford victory. Bengston launched grand slams in each of his first two at-bats in the first two innings of the game. It’s hard to do better than two grand slams in one game.

Hartford, by the way, is No. 69 in the RPI and owns a 4-3 record against the top 50, giving it an outside shot at an at-large bid. The fly in the ointment is its 13-7 conference record, which places it four games behind Binghamton and makes an at-large bid very unlikely. Still, it’s hard to build a top-70 RPI as a member of the No. 20 RPI conference, so give the Hawks some credit.

Remember when we all thought the Cavaliers might be a team in trouble from a postseason standpoint? Well that certainly now seems like ancient history, as Brian O’Connor’s club won their eight-straight contest and clinched a series win over Georgia Tech with a 9-4 triumph. 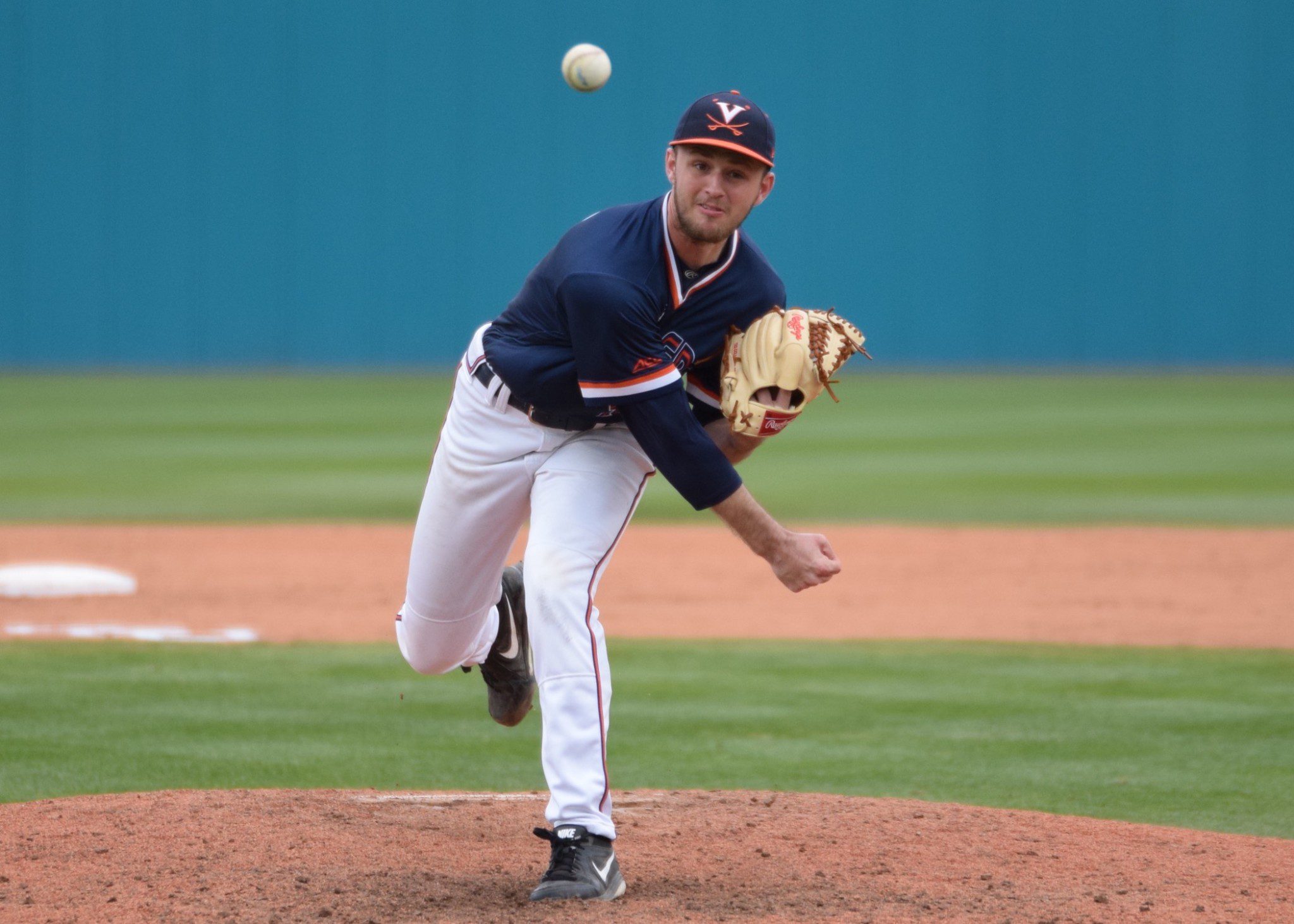 Alec Bettinger helped lead UVa. to yet another series win.

With Florida State and NC State scuffling in the national seed mix, could the Cavaliers actually work their way into the discussion? It’s possible, as O’Connor’s club is up to 10 in the RPI with a 14-13 mark vs. RPI Top 50, along with a solid 16-10 mark in the ACC. There’s still plenty of work to do for this club, but the Cavaliers, to no surprise, are surging at exactly the right time as the postseason nears.

After dropping the series opener at UC Santa Barbara, the Titans couldn’t have responded in much more impressive fashion with an 18-2 win over UC Santa Barbara, contest that saw them finish with a whopping 21 hits.

The Titans never allowed UCSB’s pitchers to get into a groove, and freshman outfielder Ruben Cardenas led the charge, hitting a home run, double and knocking in six runs, while Tanner Pinkston also had a huge night for the Titans with four hits and three RBIs. Meanwhile, Timmy Richards, Jerrod Bravo, and Jake Pavletich each had impressive performances. 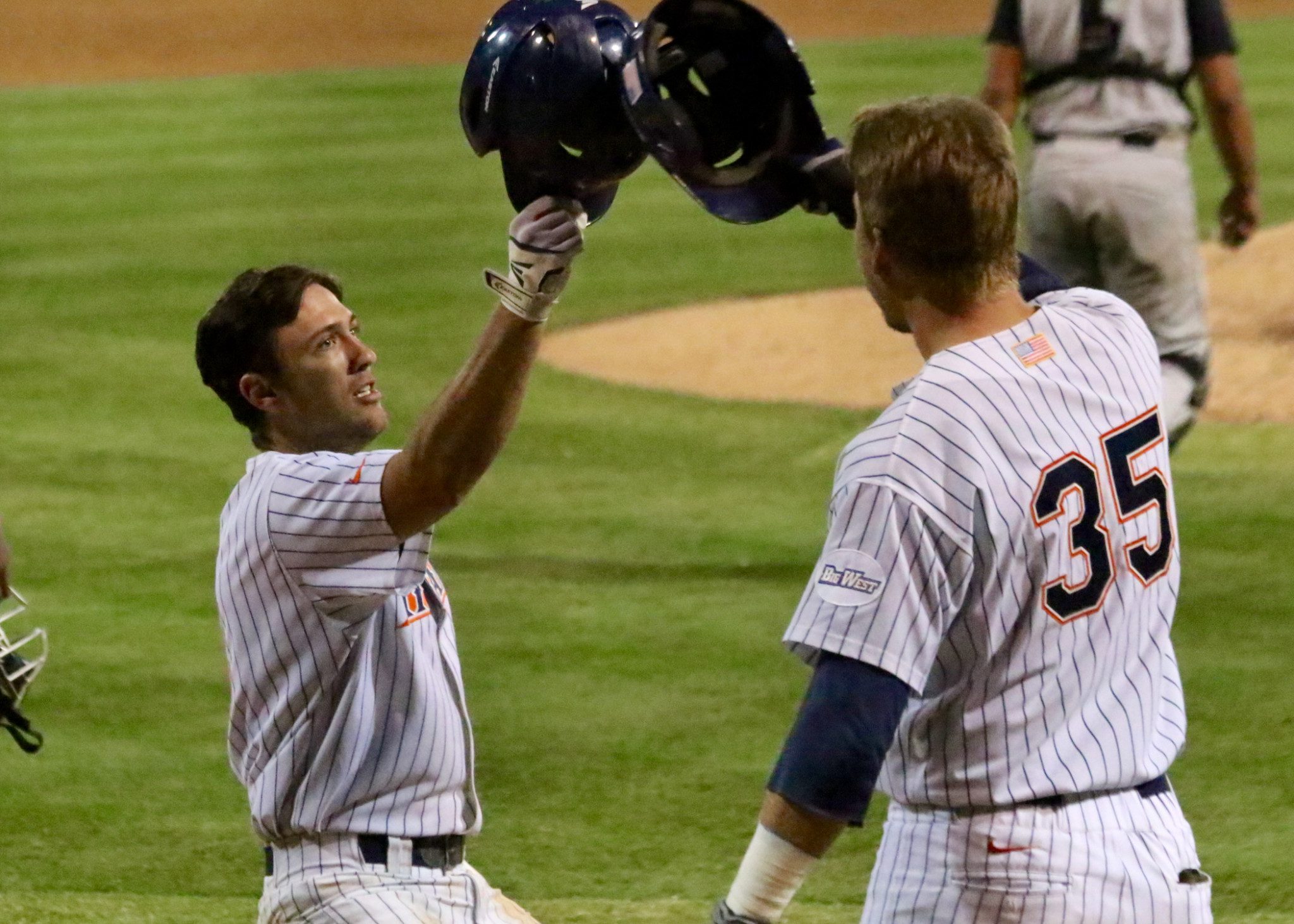 Cal State Fullerton had a strong showing against UCSB.

Though the offense led the charge, the Titans did get a quality start from lefthander John Gavin, who struck out five, walked three and allowed two run (unearned) on three hits in six innings.

With the win, the Titans improved to 31-17 overall and are now up to 34 in the RPI with a 4-7 mark vs. RPI Top 50. With Washington scuffling yet again on Saturday, you have to strongly consider the Titans working themselves into the hosting discussion.

3. Louisville flexes its muscles yet again

That series loss at Boston College a few weeks ago must’ve been a wakeup call for Dan McDonnell’s Cardinals. After all, they’ve won 11 of their last 12 contests, including a 4-2 decision over NC State on Saturday to clinch that important ACC series.

Louisville workhorse lefthander Drew Harrington put together a strong start, striking out seven, walking just one and allowing two runs on eight hits in seven innings, while the bullpen did their job, too, with hard-throwing righty Zack Burdi striking out all three batters he faced in the ninth to notch his ninth save of the season. 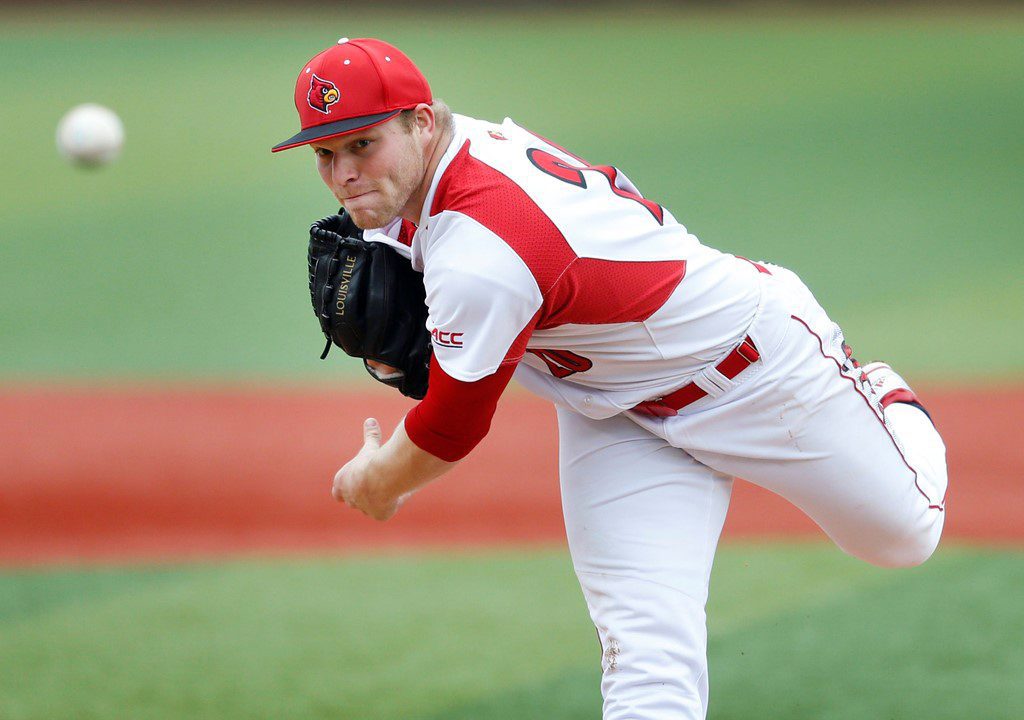 Drew Harrington put together a strong start for the Cards.

Offensively, Brendan McKay and Drew Ellis each had two hits to lead the charge, while for NC State, starting pitcher Brian Brown scuffled a little, allowing four runs on seven hits in 4.2 innings.

While Louisville moves into very safe national seed area, the ACC duo of NC State and Florida State now have some serious question marks after the Pack’s loss today, and of course, FSU’s loss to Duke to lose that series.

The Cards are getting red-hot at exactly the right time.

As we navigated the regional projections last week, TCU and Oklahoma State were hot and heavy in our discussions for the final host spot. Well, that decision might not be so difficult this week, as the Horned Frogs dropped a road series to Baylor with an 8-5 setback on Saturday.

TCU righthander Mitchell Traver made his second start of the season and allowed a run on three hits in three innings. However, the bullpen was unable to take care of business, while Baylor lefthander Daniel Castano was able to keep TCU’s offense off balance by allowing just two runs on seven hits in seven innings of work.

While the Frogs are theoretically still in the hosting hunt with an RPI of 18, it’s hard to vouch for the resume at this point. In addition to being just 8-6 vs. RPI Top 50, the Frogs are now a whopping 5 1/2 games behind first-place Texas Tech. Meanwhile, Oklahoma State isn’t in much better shape, but is two games ahead of TCU in the conference standings.

Never say never, but the Frogs are trending the wrong direction.

The Huskies and Utah entered the weekend all tied up atop the conference standings, but UW is now playing from behind after losing the first two games of its home series against rival Washington State, 9-3 and 7-2 in Saturday’s contest.

For the Huskies, things now get very, very interesting. We thought this team looked good for a host site last week, but UW is now down to 47 in the RPI with a 5-3 record vs. RPI Top 50. In other words, as of right now, conventional wisdom and historic trends would suggest no host for the Huskies.

Once again, it’s incredibly difficult to figure out what’s going to happen in the Pac 12 from week to week.