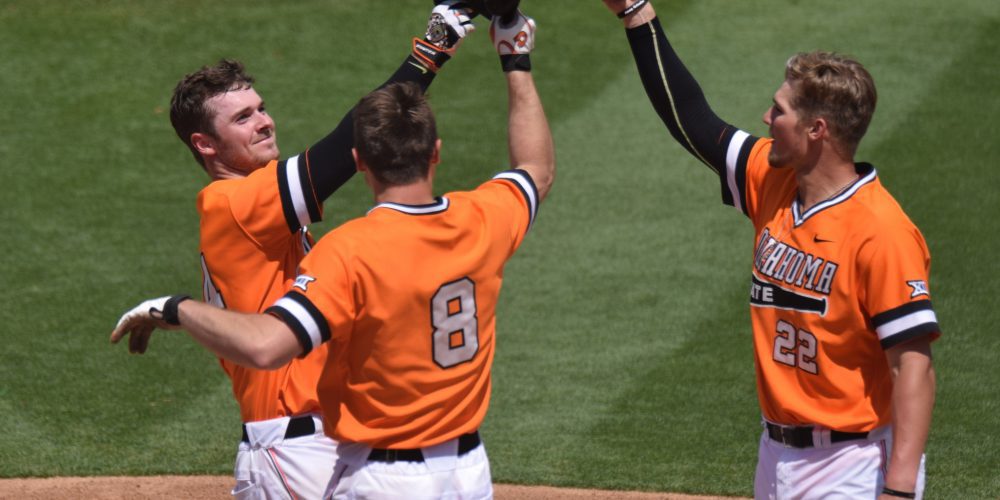 Teams On The Upswing: Week 10

Another week of college baseball action is finished, and as usual, the sport is again somewhat of a revolving door outside the top eight or nine teams in the country. That hasn’t kept plenty of teams out there from trending the right direction.

In our latest edition of On The Upswing, we look at 10 teams that are trending a positive direction and have a chance to make some serious noise as the postseason nears.

The Cowboys have endured an up-and-down season, but they’re starting to look more like the preseason top-10 club we expected to see. After losing back-to-back series at West Virginia and home against Texas Tech, OSU fell out of the Top 25, but they returned to the rankings this week after taking two of three from Big 12 power TCU. Now OSU has won six of its last seven games (all against Big 12 opponents — Baylor, Oklahoma and TCU). But most encouragingly, the Oklahoma State offense is finally starting to perform up to its potential. The Cowboys scored 26 runs in three games against a TCU pitching staff that ranked in the nation’s top 20 in ERA heading into the weekend.

Mainstays like Dustin Williams and Ryan Sluder have struggled mightily for most of this season, and Conor Costello has been sidelined most of the year while working his way back from a broken wrist. Those three were all key middle-of-the-order run producers over the previous season or two, so their struggles have been a big reason OSU’s offense has underperformed. Naturally, Oklahoma State coach Josh Holliday was pleased to see them each contribute this weekend, especially Sunday.

Sluder reached safely in seven of his 12 plate appearances this weekend and delivered an RBI single and a double in Sunday’s 11-7 win. Williams had a two-run single and a mammoth solo homer on Sunday, and Costello made just his 10th start of the year and made his presence felt, launching a towering three-run homer down the left-field line that helped put the game out of reach in the fourth.

If that trio can use this weekend as a springboard and contribute in a big way down the stretch, Oklahoma State can still be a very dangerous offense, because it has some weapons in the top half of the order, led by superb switch-hitting shortstop Donnie Walton and catalyst J.R. Davis, who was on base all weekend out of the leadoff spot.

“I though Ryan had his best weekend in quite some time. Dustin got the bat going a little bit, for sure today,” Holliday said. “Donnie is as steady and consistent of a high-level performer as you could ever hope to coach — he gets one or two hits every single game, makes great plays, leads, stabilizes the team … (Davis) can put a good swing on a pitch; he’s dangerous. He got some good pitches to hit early in the count and he hit them. So he was on go, that sets the tone that works its way through the lineup. He’s a threat to run a little bit, gets some fastballs hopefully for the guy behind him.

“We’re a team that needs to be playing all cylinders, and I felt like this weekend against a very good team, we played very well, with the exception of a couple innings (Saturday) when their outstanding offense kind of took over. But other than that, I thought we did some really good things.”

Now the Cowboys are up to No. 25 in the RPI, and a run at a regional host and maybe even the Big 12 title is back within the realm of possibility.