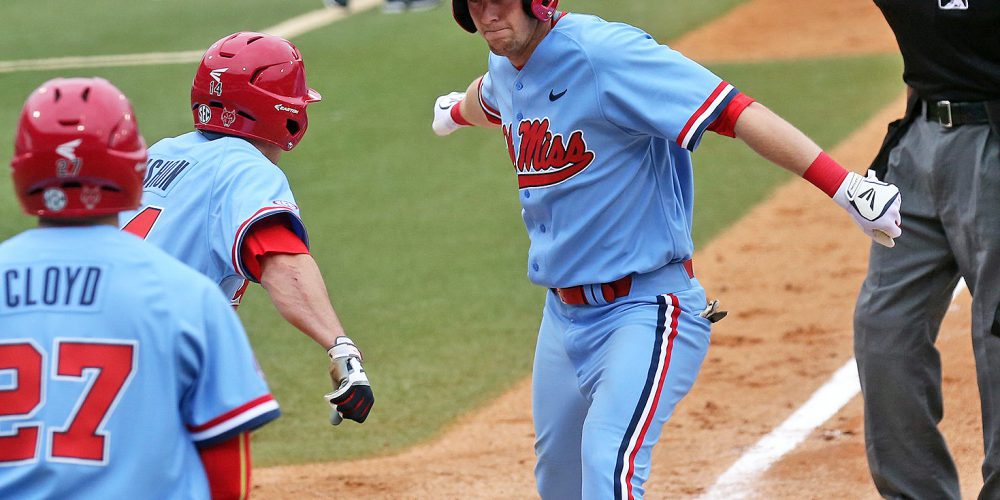 Woodman put Ole Miss on his back and carried them to an enormous series win against LSU. In Saturday’s rubber game, the junior center fielder slugged a pair of home runs to dead center field and drove in four runs to lead the Rebels to an 8-2 victory. That performance capped a huge weekend that saw Woodman hit three homers, drive in eight runs and throw three runners out at the plate. He now leads the team with eight long balls on the season.

Tate Blackman and Colby Bortles contributed three hits apiece and combined for four runs to help lead Mississippi’s 13-hit attack. Heading into the weekend, we wrote that the winner of this series would put itself in clear hosting position — and the Rebels held serve at home. They’re now 33-12 overall, 12-9 in the SEC and No. 7 in the RPI, with marquee series wins against Louisville and LSU. That’s an easy hosting resume at this point in the season.

2. Team of the Day: South Carolina

In the marquee series of the weekend, No. 7 South Carolina evened its series against No. 1 Florida with a riveting 2-1 win. Braden Webb (7.1 IP, 5 H, 1 ER, 3 BB, 7 K) improved to 9-2 on the season for South Carolina, which broke a 1-1 tie when Gene Cone hit a solo homer to right field — left-on-left against Gators southpaw specialist Kirby Snead in the seventh inning. From there, Tyler Johnson earned a white-knuckle save, stranding runners at second and third in the eighth by striking out JJ Schwarz on high heat, then stranding the tying run at third base in the ninth by fanning Ryan Larson on another blazing fastball.

It was the kind of high-level game you’d hope for from two of the best teams in the country, and a lively crowd of 8,242 contributed to the postseason energy in Founders Park. South Carolina is now 15-5 in the SEC, one game ahead of Florida heading into Sunday’s big rubber game. A win would certainly put the Gamecocks in the driver’s seat for a national seed. Florida figures to remain in national seed position regardless of Sunday’s outcome.

3. Elsewhere in the Palmetto State…

Clemson is in serious need of a series win against Florida State after losing three of its last four series. The Tigers got off to a strong start in the Saturday through Monday series with a 10-3 win in the series opener. Chris Okey (3-for-5, 2 R, 5 RBI, HR) and Weston Wilson (1-for-4, HR, 4 RBI) powered the Clemson offense, and the Tigers got 4.2 combined innings of two-hit, shutout relief from Alex Eubanks and Brooks Crawford to nail down the win. The Tigers are still two games below .500 in the ACC at 10-12, but another win against FSU puts them back in the hosting race.

4. Upset of the Day: USC over Arizona

Just when we thought Arizona was emerging from the Pac-12 scrum as the most likely host candidate, the Wildcats went on the road and lost a series to a Southern California club that entered the weekend with an 18-21 record. Jeremy Martinez went 3-for-4 with two RBIs to lead USC’s 13-hit attack in Saturday’s rubber game, a 5-2 win for the Trojans.

Arizona fell to 11-10 in the Pac-12, while USC improved to 9-9. The Wildcats remain in the hosting mix with an RPI of No. 34, but this weekend was certainly a setback. Meanwhile, USC has no shot at an at-large bid with its losing overall record and its No. 114 RPI… but it is still alive in the race for the Pac-12’s regular-season title (and automatic bid). At 9-9, the Trojans are tied for fifth place, but they’re just 2.5 games behind first-place Utah with four series remaining.

Speaking of Utah, guess who sits all alone atop the Pac-12 standings? That’s right, it’s the Utes, who are one game ahead of Washington with an 11-6 conference record, despite a 16-22 overall mark. Last week we wrote about the resurgence of UCLA, which put itself back in the at-large hunt with a sweep of Oregon. Well, Utah just about dashed UCLA’s hopes this weekend by taking the first two games of a home series against the Bruins. Dalton Carroll went the distance in Saturday’s 9-4 win, and third baseman Dallas Carroll (2-for-4, 3 RBI) helped lead Utah’s balanced 16-hit attack.

Obviously Utah needs to win the Pac-12 title to get into a regional, but at this point it’s time to take the Utes seriously as a legitimate contender for the conference crown — they just aren’t going away. They’ve already swept Arizona and won road series against Oregon and Arizona State. The road ahead features a winnable road series against Washington State, a winnable home series against Stanford, then series against two Pac-12 challengers — at Cal and vs. Washington. UCLA, meanwhile, is in a world of trouble. The Bruins are down to 11th place in the Pac-12 at 9-11, and their RPI has dropped to 87th. 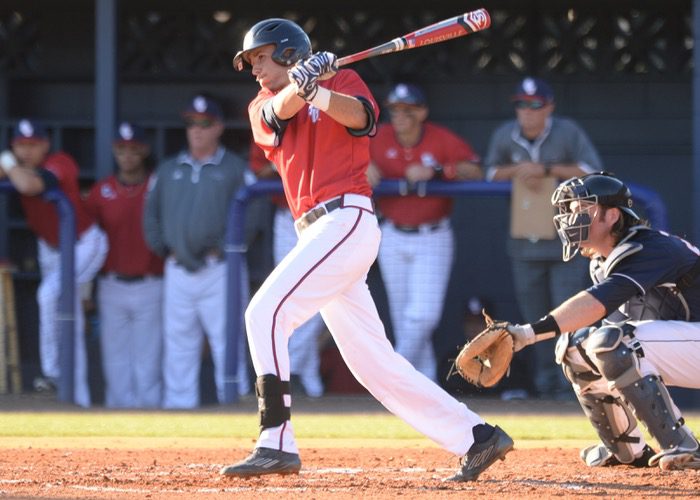 After an extended stay in the Top 25, Florida Atlantic has scuffled a bit over the last month or so, losing two of their last three series heading into this weekend against Charlotte and Florida International. The Owls had a chance to make a statement and reverse their momentum with a huge home series against No. 25 Southern Miss, which sat atop the Conference USA standings heading into the weekend. FAU took care of business with a 9-5 win in Friday’s series opener, then kept its bats rolling Saturday with a 9-4 win to clinch the series. Star shortstop CJ Chatham went 5-for-6 with three runs, five RBIs, a triple and a homer to pace Florida Atlantic’s 16-hit barrage in support of Brandon Rhodes (6-2. IP, 5 H, 3 ER).

The win puts Florida Atlantic back in the regional hosting race. FAU is sitting at No. 24 in the RPI, and it is now tied with USM for second place in C-USA at 14-6, just a half-game behind first-place Rice (which won its rubber game Saturday against Charlotte). We’ve said all along that the regular-season champion in C-USA figures to host, but for the last few weeks it has looked like that champion would be Southern Miss or Rice. But if FAU can complete the sweep Sunday, it will be tied with Rice for first place, with a series still ahead against the other Owls in Houston in two weeks.

7. Doubleheader splits in the SEC West

A pair of SEC West heavyweights ranked in the top five split road doubleheaders on Saturday. No. 2 Texas A&M dropped its series opener at Arkansas 9-5 in the first game Saturday, then bounced back to win the nightcap 11-8 in 11 innings. Rick Nomura went 3-for-4 to lead the Hogs’ balanced 13-hit attack in the first game, as Arkansas broke open a 4-4 game with four runs in the sixth. The two teams combined for 29 hits in the second game, as Ryne Birk went 4-for-5 to lead A&M’s 15-hit barrage, and the Aggies got a tie-breaking two-run homer from Hunter Melton in the 11th.

Elsewhere in the SEC West, No. 4 Mississippi State split a doubleheader Saturday at Alabama to win the road series after taking Thursday’s series opener. MSU used nine pitchers in the first game Saturday, and Bama scored twice in the ninth to earn a walk-off 4-3 victory. But the Bulldogs got a strong start in the seven-inning finale from Konnor Pilkington (5.2 IP, 3 H, 1 ER, 2 BB, 7 K), as the Bulldogs scored twice in the second inning and held on for the 2-1 win.

Texas A&M is now 1.5 games up on Ole Miss and MSU in the SEC West, with the Aggies slated to finish their series on Sunday. At this point, all three teams are looking like hosts, and two figure to land national seeds.

No. 12 TCU evened its huge series against No. 14 Texas Tech with a 13-6 win Saturday. The Red Raiders scored three runs in the top of the fifth to carry a 5-1 lead into the bottom of the frame, but TCU exploded for seven runs in the bottom of the inning and four more in the sixth to take command of the game. Texas Tech imploded in that big fifth, which featured just three hits but also three walks, two hit by pitches and an error. Austen Wade, Elliott Barzilli and Dane Steinhagen led TCU’s offense with two hits apiece in the game and combined for five runs and six RBIs.

TCU is now tied for second place with Oklahoma State at 11-6 in the Big 12, two games behind Texas Tech. The Cowboys swept their doubleheader against Texas on Saturday. Another win for TCU in Sunday’s rubber game has the potential to make the Big 12 race very, very interesting. 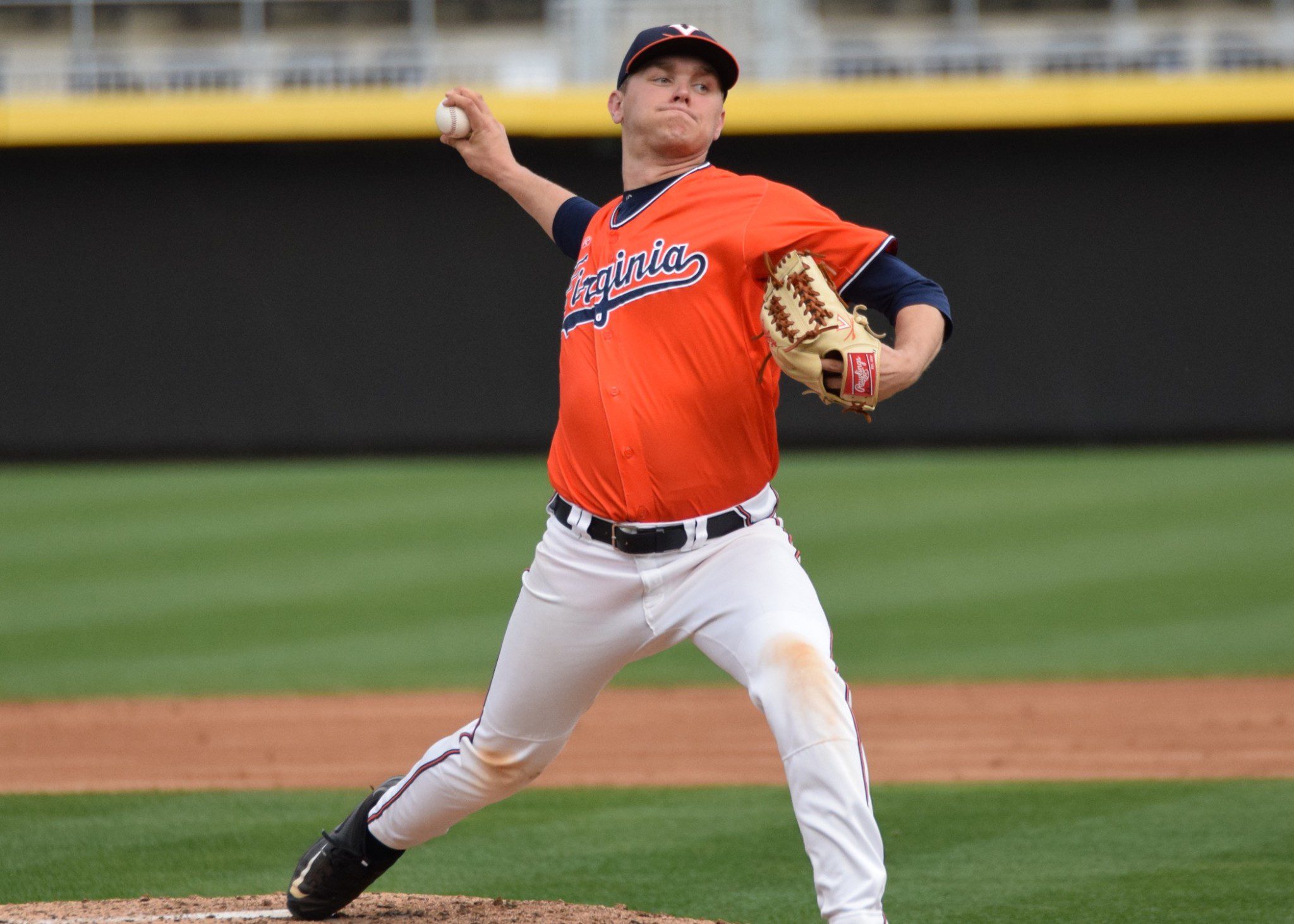 Just three weeks ago, Virginia was looking like a shaky bubble team, with three straight series losses to Louisville, NC State and Boston College. But in the three weeks since, the Cavaliers have righted the ship, winning series against North Carolina, at Miami, and now at Pittsburgh. Virginia swept a doubleheader against the Panthers on Saturday, winning the first game 5-1 and the second game 7-6. The opener featured one of the marquee pitching matchups of the weekend between potential first-round picks Connor Jones and T.J. Zeuch. Jones went the distance, allowing just a run on four hits to improve to 9-1 on the season. Zeuch lasted seven innings and allowed five runs (just two earned) on six hits while striking out eight. In the nightcap, UVa. jumped out to a 5-0 lead in the first, but Pitt chipped away at the deficit and took the lead in the fifth inning, only to see Virginia score twice in the ninth to steal a 7-6 win. Justin Novak’s two-run double provided the tying and winning run.

We talked about Virginia’s stealthily improving hosting chances in last week’s committee podcast, and its case looks even better now. The Cavs are up to 13-10 in the ACC Coastal (alone in second place in the division behind Miami), and their RPI is up to No. 17.

Just a few days ago, we were ready to dismiss Long Beach State’s chances at an at-large spot. The Dirtbags lost four games in a row last week, including a series at UC Riverside, and they headed into this weekend down at No. 70 in the RPI. Meanwhile, Cal Poly was surging after a sweep of UC Santa Barbara. But the Dirtbags reversed their momentum — and the Mustangs’ momentum — by taking the first two games of a series between the two clubs at Blair Field this weekend.

Darren McCaughan allowed just four hits and no walks over eight shutout innings Saturday to lead Long Beach to a series-clinching 2-0 win. Just like that, in the span of two days, the Dirtbags are up 22 spots to No. 48 in the RPI, and just 1.5 games out of first place in the Big West at 8-6. They’re right back in the thick of the at-large race.