Kel Johnson and Georgia Tech highlight our look back at Saturday's action.

Two of the premier matchups in the ACC on Saturday turned out to be lopsided affairs. No. 6 NC State evened its series at Clemson with a 20-9 shellacking of the Tigers. Eight Wolfpack players recorded multiple hits as part of a 21-hit barrage, led by Josh McLain (3-for-6, 2 R, 4 RBI), Chance Shepard (3-for-4, 4 R, 3 RBI) and Andrew Knizner (3-for-5, 2 R, 2 RBI). Clemson actually led 1-0 after one inning, before the Wolfpack scored four runs in the second, seven in the third, and then nine in the fourth. The Tigers are just plain short on pitching, and they’ve really struggled on the mound in the second game of their last three series, allowing a combined 47 runs in those three games.

Meanwhile, No. 22 Georgia Tech drubbed No. 3 Miami 12-1 in the series opener in Atlanta. Kel Johnson and Arden Pabst had three hits apiece to lead a 17-hit assault for the heavily righthanded-hitting Yellow Jackets, who knocked around lefty Thomas Woodrey (5 IP, 11 H, 6 R, 5 ER). And Tech got a very strong start from ace Brandon Gold (7 IP, 6 H, 0 R). The surging Jackets, who have won back-to-back series at Clemson and vs. Coastal Carolina, climbed over .500 in the ACC (11-10).

After Arizona swept a road series at Cal two weeks ago, we moved the Wildcats into regional hosting position in our field of 64 projection. Then they lost a series at Southern California last weekend, and they dropped back out of a host spot, replaced by Washington. But Arizona has a chance to reclaim the mantle of Pac-12 hosting front-runner this weekend.

So Arizona improved to 13-10 in the Pac-12, nipping at the heels of 12-8 Washington, which evened its series at USC with a win Saturday. In this back-and-forth race, Sunday’s results will determine which of the two teams takes the lead as the Pac-12’s hosting favorite. But Oregon State is just about out of the mix at this point, at 10-10 in the Pac, No. 40 in the RPI, and with series losses  at Arizona, Utah and Cal.

East Carolina hasn’t had a dominant, glamorous season. The Pirates haven’t reeled off any long winning streaks this year — at least, not since winning their first six games of the season. But they have quietly, steadily plugged along, taking care of business just about every weekend, hovering in the 18-25 range in the rankings. The Pirates sure took care of business on Saturday, winning a pair of games at Connecticut to improve to 10-6-1 in the American, just a half-game behind first-place Tulane.

Rice and Southern Miss entered the weekend tied for first place in Conference USA, and they remain tied after each team has won its first two games this weekend. A day after Jon Duplantier and Glenn Otto combined on a shutout at Florida International, the Owls got another shutout in Saturday’s series-clinching 3-0 win. This time, veteran lefthander Blake Fox went the distance himself, scattering six hits and allowing no walks while striking out 10.

Southern Miss won Friday’s opener against Western Kentucky with its bats, 12-5. But Saturday, the Golden Eagles rode their arms to a 3-0 win of their own. Kirk McCarty (6.1 IP, 1 H, 0 R, 1 BB, 9 K) was superb, and Nick Johnson and Nick Sandlin combined with strong relief work in a combined three-hitter. Southern Miss and Rice are now both 17-6 in the league, with Florida Atlantic just a game back at 16-7 after winning the first two games against UTSA. This race looks like it will be compelling right down to the wire.

5. Beggs to the rescue 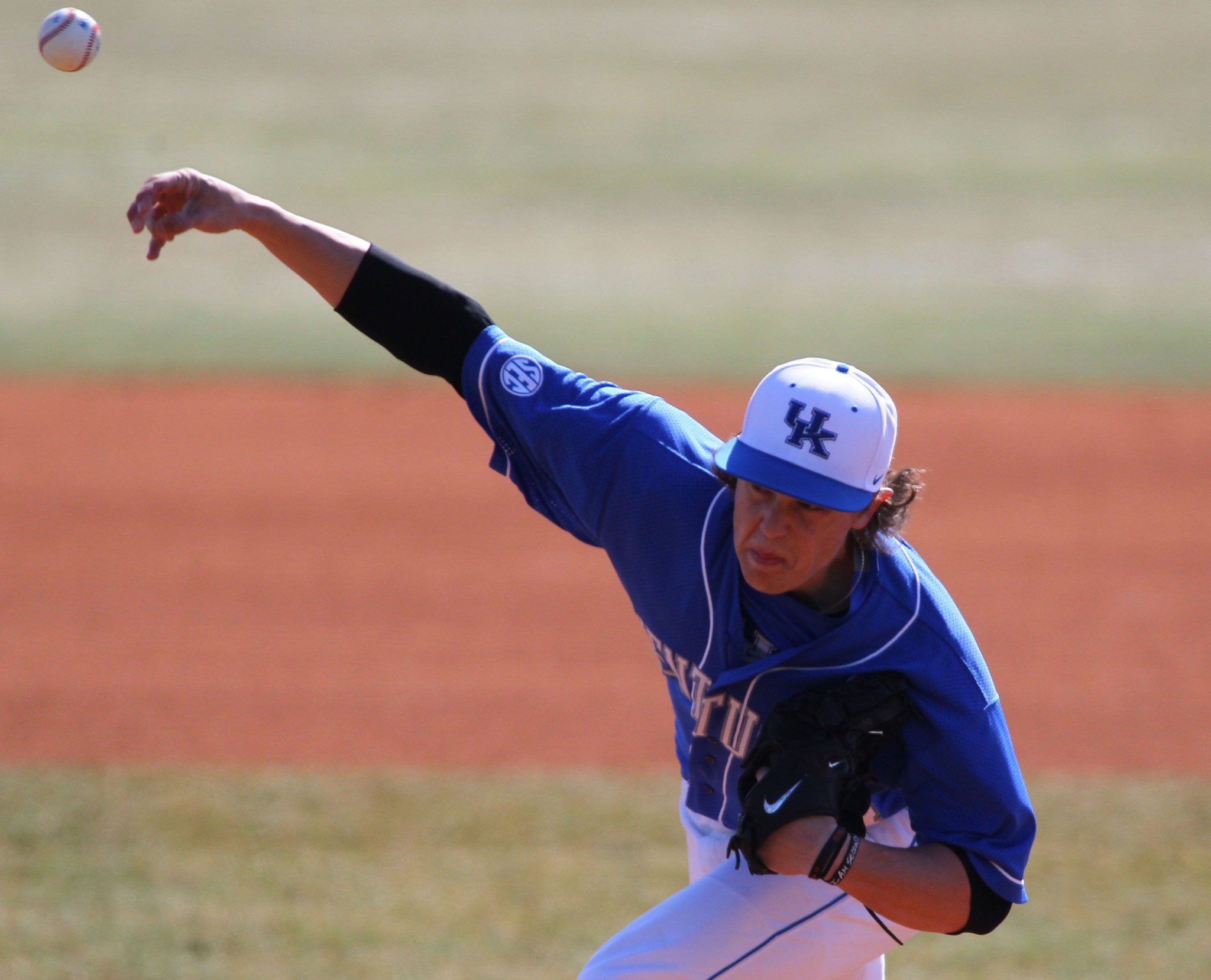 We’ve already written a couple of times this week about Kentucky’s descent into the danger zone. The Wildcats had lost 11 of their last 16 games heading into Saturday, including three straight SEC series, so they desperately needed to reverse their momentum Saturday against South Carolina. Fortunately for Kentucky, it had ace righthander Dustin Beggs on the mound — just the man to stop a skid. Beggs put the Wildcats on his shoulders and delivered a three-hit shutout against South Carolina’s potent offense, allowing just one walk while striking out seven in UK’s series-leveling 6-0 win. Beggs improved to 8-1, 2.50 on the season, and he helped the Wildcats climb back above .500 in the SEC (12-11).

“He pitched extremely well. He has competed well all year,” UK coach Gary Henderson said afterward. “Tremendous job, obviously, tonight. Mixed all of his pitches. Really proud of that effort in obviously a game we needed to win. … Really proud of Dustin showing up in a game that really mattered.”

1. Upset of the day: Tennessee over No. 1 Florida

It hasn’t exactly been a season to remember for the Volunteers, but they picked up an impressive 5-2 win over top-ranked Florida on Saturday with sophomore lefthander Zach Warren leading the charge.

Warren allowed just two runs on seven hits in 5.1 innings of work, while the bullpen was terrific with Andy Cox striking out two and allowing just two hits in 3.2 innings. Offensively, heralded third baseman Nick Senzel hit a home run and knocked in a pair of runs.

For the Gators, junior lefthander AJ Puk put together one of his worst start of the season, striking out six, but also walking six, while allowing two runs on three hits in just 3.1 innings.

The good news for Florida? No matter what happens in the series finale, it is still a dead set lock to get a national seed. Meanwhile, the Vols need some special things to happen down the stretch just to reach the SEC tournament in a few weeks.

2. Arizona State takes yet another series

It wasn’t too long ago the Sun Devils were one of those teams left for dead, but coach Tracy Smith and his staff have this team playing with a lot of confidence, as they showed Saturday night in a 9-8 walk-off win over Oregon to clinch yet another Pac-12 series.

ASU entered the ninth inning down 8-7, but scored on a ground out before Jordan Aboites smacked an RBI walkoff single through the left side of the infield to win the contest.

David Greer led the offensive charge for the Sun Devils, collecting three hits and knocking in five runs, while Aboites finished the night with a pair of hits.

With the series win over the Ducks, ASU has now won four-straight series, three of those Pac-12 slates, and now have a huge series win coming up next weekend against Arizona. Of course, the Devils would like to finish off a series sweep of UO first.

Arizona State’s RPI is up to into the mid 40s and is now just a game back of first place in conference.

What a turnaround for Smith’s club.

We wrote about the Lions and their offensive explosion in the series opener against Lamar on Friday, and they put together yet another impressive performance in a 5-2 series-clinching win over the Cardinals.

Lions starting pitcher Mac Sceroler started the afternoon on a positive note, striking out five, not walking anyone and allowing just two runs on nine hits in six innings, while the bullpen did a terrific job with Kade Granier tossing 2.2 shutout frames to end the contest.

Offensively, Sam Roberson went a perfect 3-for-3 to lead the charge, while Brennan Breaud and Derrick Mount each chipped in two-hit performances.

From a postseason perspective, the Lions now move into a better at-large standing should they not win the SLC tournament. Southeastern is up to 36 in the RPI with a 7-7 mark vs. RPI Top 50, while the Cardinals will now need to make some magic happen with an RPI of 70 and now just a 3-5 mark vs. RPI Top 50 clubs.

If there’s something we’ve learned from the Tigers this season it’s that you truly have no idea what to expect. Saturday night’s win over Arkansas was another example of that, and was a true tale of two games.

LSU got off to a horrid start against the Razorbacks, as junior lefthander Jared Poche allowed four runs on seven hits in 1.1 innings. However, the Tigers just chipped away as the game progressed and cut a 9-1 deficit to a 9-5 deficit after seven innings. LSU, with a little help from Arkansas, went back to work in the ninth with four runs to tie the contest before Kramer Robertson singled and the winning run scored in the 10th on an error.

It was truly one of those bizarre games in college baseball, and it included a delay in the seventh inning … due to a possum being on the field. It has now been dubbed the #RallyPossum by LSU fans. 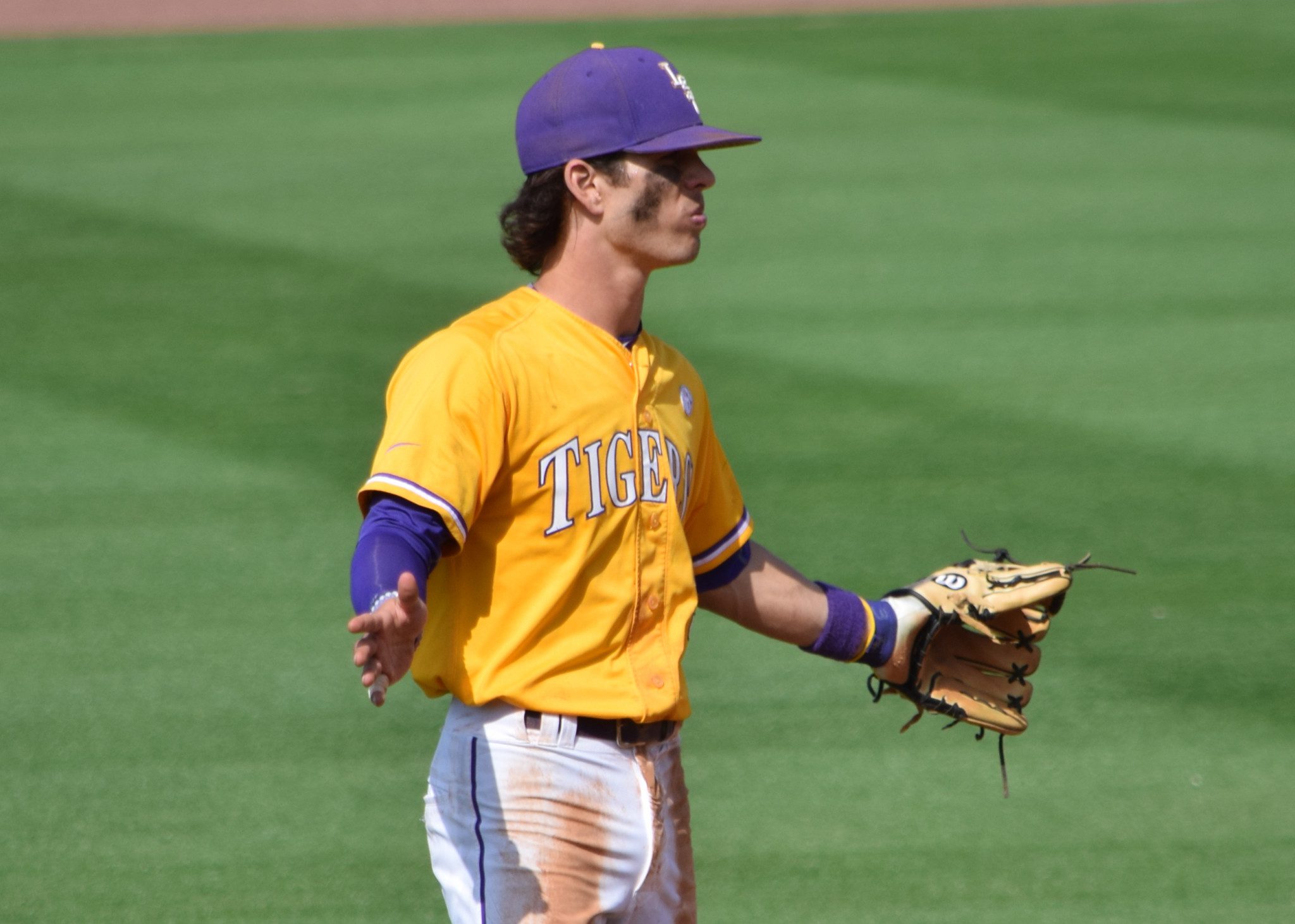 Robertson has been a stabilizing force for the Tigers. (Kendall Rogers)

While Robertson and Chris Reid finished the contest with three hits, Brennan Breaux also had a surprising and big night at the plate, recording three hits and knocking in a pair of runs.

While LSU clinches a home series win, the Hogs drop to 7-16 in the SEC and are all but eliminated from the postseason mix without getting to Hoover and winning the conference tournament.

How about the Rebels starting to figure things out the past few weeks? It wasn’t long ago there was some serious concern about this club’s ability to potentially host a regional. However, things have changed and Ole Miss has since won three-straight conference series after beating Georgia 7-3 on Saturday.

Ole Miss starting pitcher David Parkinson allowed three runs on seven hits in 5.1 innings, while the bullpen was tremendous with Connor Green tossing 1.2 shutout innings and Wyatt Short closing it out with 1.2 scoreless frames. Meanwhile, star outfielder J.B. Woodman continues his torrid clip as of late with a pair of homers to raise his total to 10 for the season.

With the series win, the Rebels just solidify their host spot even more, while a national seed isn’t out of the picture at this juncture, either. Meanwhile, the Bulldogs are now 7-16 in the league, 8-17 vs. RPI Top 50 and would have issues making the postseason right now despite an RPI in the low 30s.